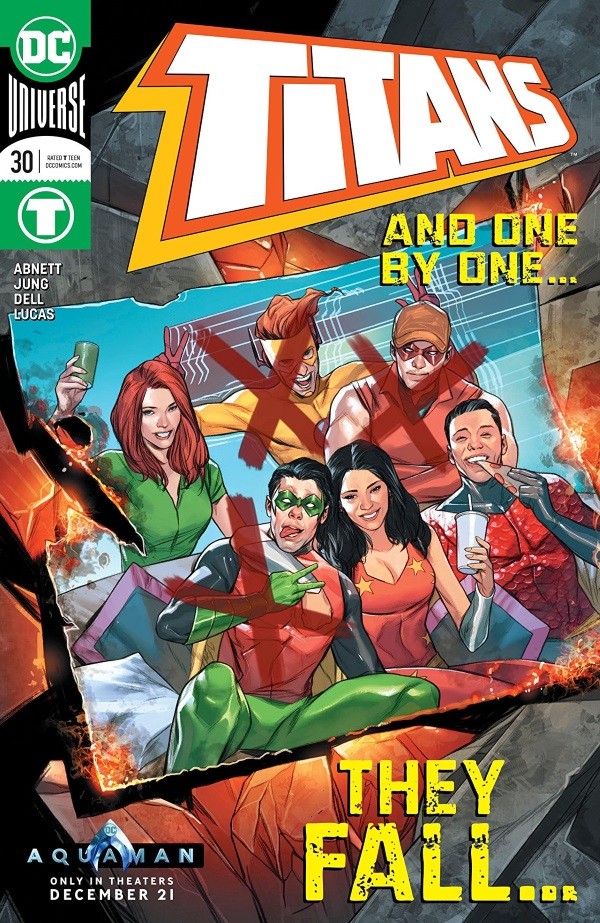 SYNOPSIS: “MAROONED” part two! Stranded on an alien world with no means of travel, Beast Boy finally succumbs to his more monstrous tendencies and could become the most dangerous thing on an already dangerous planet. The Titans are forced to square off against a savage and gargantuan Garfield! Will the Titans be able to maintain their fractured team in the face of extraterrestrial adversity and sinister secrets coming to light? And even if they can, how on Earth will they ever get back home?

We left the Titans as they were falling apart. Stranded with no way out, everything comes to a head when Beast Boy and Miss Martian lose control and show everyone what they’ve been holding back.

It is clear, this arc is meant to drive this incarnation of Titans together, and endear us to them, by tearing the team apart. It may be cliché, but clichés are used for a reason: they work. Most of the heavy lifting is done during the fight between berserker (I really hate using this term because of another hairy guy, but it’s in the issue so…) Beast Boy and Miss Martian in her true White Martian form. The fight calls back to Beast Boy using empathy to get through to the first affected person the team encountered. This time Miss Martian invokes that same empathy to break Beast Boy out of his rage. At that moment, the two physical “monsters” stand before the team and realize that what they appear to be is not who they are. It is in that moment of acceptance that the team can finally come together as a unit.

This feels like the moment I have been waiting on since the new team was formed. The Titans have been put through their hardships, but it was time for them to truly become a team. This is not the way I saw the team forming, but I think, in the long run, this is going to be the best version of this team (especially if the last page has something to do with the line-up).

Donna accepts her rightful place as the leader (begrudgingly of course) and it feels right. Dick (Ric) felt right for the old Titans. They were all brought in as the original sidekicks and grew up together. They felt more…tradition. This team is definitely not that. Collectively they all feel broken, and Donna definitely is, and that’ why this had to be her team.

Now, onto my favorite part…Kyle Rayner is here!

Is he going to join the Titans?

Were he and Donna a thing in the Rebirth reality?

This issue answers none of that, but Kyle is here and that’s all that matters!

If you couldn’t tell I’m super excited that the best Green Lantern (fight me internet) shows up. Kyle has history with the Titans, and Donna Troy specifically (maybe? Hopefully!). There are no hints given, but I hope he becomes a part of the team and isn’t just a guest for a few issues. What team couldn’t use a Green Lantern on their bench? – E. Chad Metz

The Joker’s Not Happy About Batman & Catwoman Getting Hitched