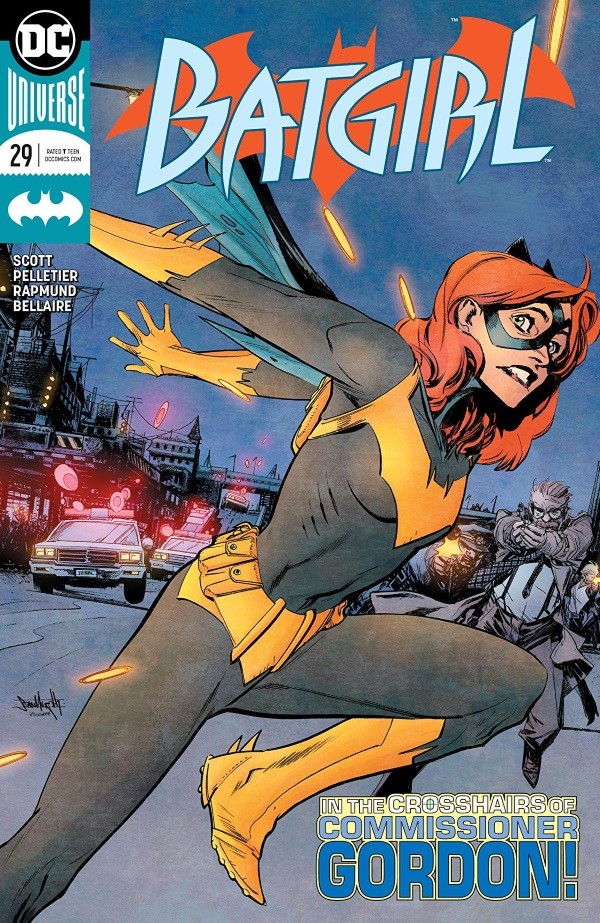 SYNOPSIS: In the finale of “Art of the Crime,” Batgirl may have uncovered Grotesque’s real plot, but that only means she knows the real danger that faces Jim Gordon and the GCPD! Can Barbara take down Grotesque before he pulls off a massive heist and ruins the GCPD’s rep in the process? Maybe, but it won’t be a paint-by-numbers job!

We get two more great covers with this issue, one from Sean Murphy & Matt Hollingsworth, and another from Joshua Middleton. Although I must say, neither image seems to have much to do with anything that actually happens in the issue, and the main cover is outright misleading.

The story wraps up here in fairly standard fashion. Barbara gets into the museum, confronts Grotesque as Batgirl, a melee ensues, and she foils the plot with minimal casualties while the big bad behind it all is still at large. There’s a little nod to the subplot of Babs’s damaged spinal implant, but it ultimately doesn’t affect anything.

The nature and abilities of the Wyrm/Dark Web minions in this issue seem rather nebulous. Like, are the people being possessed by some techno-ghost? Are they robotic drones in disguise as humans? Are they twisted reincarnations of the Care Bears, suddenly breathed to life in modern day Gotham City? (That last one’s probably unlikely.) I think if I was reading Nightwing or whichever other books this villain shows up in, I’d have a better understanding, but having only encountered them in Batgirl and the recent Nightwing Annual, it comes off as make-it-up-as-you-go-along sci-fi mumbo-jumbo. This is a subjective complaint, however, and I suppose it’s just something that comes with the territory of shared universe comics.

This arc has left me a little cold. Whereas the last few years of Batgirl have established the title as a comic written and drawn with female and LGBTQ audiences in mind, as opposed to only the traditional straight male demographic, this arc feels a bit like a return to less inclusive times. I wouldn’t point the finger squarely at writer Mairghread Scott, as this was probably a group decision by DC higher-ups. Scott shines brightest in the father/daughter scenes between Barbara and Jim Gordon, and these moments have formed the emotional backbone throughout this story. The rest of the plot and action could have just as well been a Batman or Nightwing story. The artwork plays heavily into the tonal shift as well. Babs Tarr and Cameron Stewart gave Batgirl a fresh look with some manga influence and a recognition of modern style and fashion, and other artists such as Bengal and Rafael Albuquerque have followed suit. Characters were allowed to be cute and fun rather than just sexy or badass. Paul Pelletier and Norm Rapmund have a good handle on action and dynamic composition, but their art looks like a lot of comics from 10-20 years ago, i.e. drawn by and for dudes. I also have to wonder if Batgirl’s costume change was made partially to get her out of that bulky jacket and into something more skintight.

Barbara’s a great character to root for and I’m still excited to follow her adventures month-to-month, but I feel this title has lost some of what made it special. Here’s hoping that changes in the next story arc! – Rob Veatch III