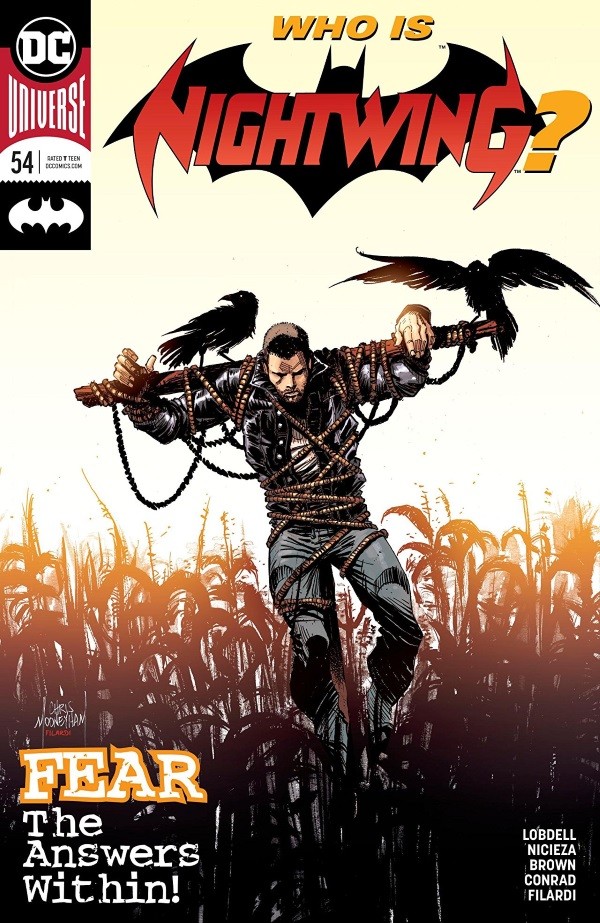 SYNOPSIS: The repercussions of the cataclysmic events of BATMAN #55 continue as a scarred Dick Grayson has given up his vigilante persona in favor a normal existence. A new job, new friends, new life—all are compromised when a safehouse full of old Nightwing gear falls into the wrong hands. Confronted with a past he’s worked so desperately to escape, will Dick Grayson answer the challenge by becoming Nightwing…or something else? The newest chapter in the evolution of Dick Grayson reaches its next level!

This week’s issue of Nightwing delivered on everything I wanted.

We got a lot more Scarecrow/Dr. Jonathan Crane in NIGHTWING #54. It turns out that he’s been acting as Ric Grayson’s psychiatrist, under the alias Dr. Gruidae, who Grayson has been required to see after being shot in BATMAN #55.

I was wondering if the name Gruidae translates to anything, turns out cranes are a family of Gruidae.

Gruidae seems to be doing a swell job, as Grayson compliments him on all the help he’s gotten. During one session Gruidae expresses some envy of Grayson’s ability to live in the moment. Later, referring to Robin, Gruidae favorably compares Grayson to a “boy” who “knew no fear.”

Since I’m currently reading Vol. 1 of Frank Miller’s run on DAREDEVIL I was happy with the boy without fear line. Probably just a coincidence that it resembles the “man without fear” tagline. Nevertheless, it was fitting to modify it for another capeless hero who fights with sticks.

Slowly we’re also getting more details about our new Nightwings, the band of Bludhaven cops who have donned Grayson’s old costumes to fight crime in Grayson’s absence. Their leader, Detective Sap, is getting better at the whole vigilante thing now that he has some back-up (last time he was solo and got beat up pretty bad).

We learn that two of the new Nightwings are a brother and sister whose father had been a police officer. The oldest sibling, Colleen, is more gung-ho about the vigilante thing and is contemptuous of her little brother Zak who shows more hesitation.

I like their dynamic, kind of has the same vibe as Gotham and Gotham Girl from the start of Tom King’s Batman run.

This issue was drawn by Gary Brown and Will Conrad and for the first time the differences in artists really stood out. It took a second to adjust after flipping the page and suddenly Grayson had a whole new look. But the flashback drawings we see as Scarecrow reminisces about his previous acts of terror more than makeup for all that.

There was also one flashback panel that threw me off a bit. We see Dick Grayson recovering in a hospital bed after being shot with a redhead at his side, very likely Barbara Gordon, and he has a medical bracelet on his wrist that says “Ric.”

Now, I’ve been fine with the whole name change thing and Dick going by Ric. But in NIGHTWING #51 he had been going under a few different names after losing his memory and didn’t seem to settle on Ric until the next issue.

I liked when Ric was a name Grayson resorted to after not caring what he was called. Having it be his go-to name just after regaining consciousness seems a bit contradictory.

It’s a minor nitpick but a very unimportant one. This is a great issue that moved the story ahead at just the right pace. – James Armstrong

Burt Ward To Appear In The CW’s Arrowverse Crossover