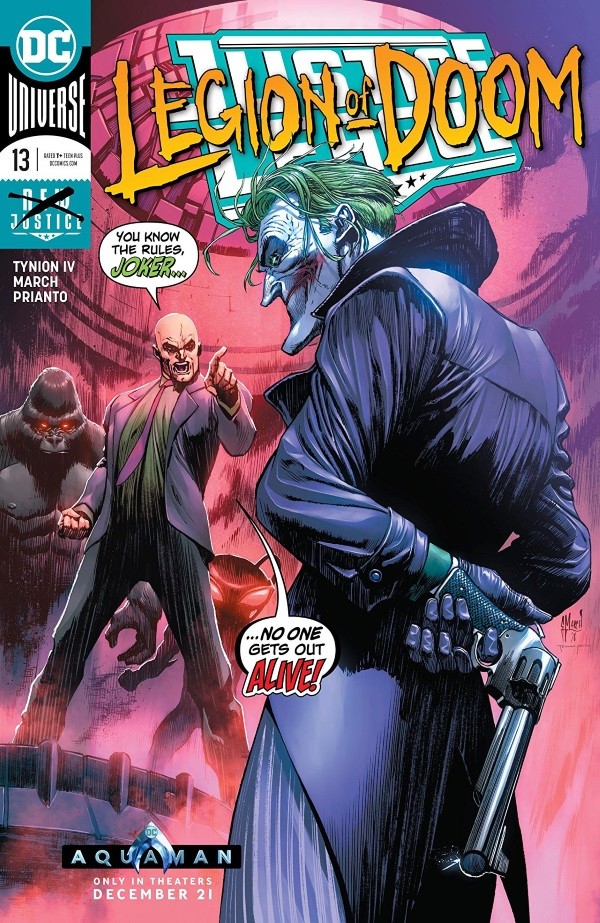 SYNOPSIS: It’s on—the Totality will totally total the Multiverse! What could possibly go wrong when the Legion of Doom gets their hands on it? Plus, what is the connection between JUSTICE LEAGUE and the new BATMAN WHO LAUGHS miniseries from Scott Snyder and Jock?

When I was a kid I never quite knew what to make of stories where Lex Luthor teamed up with the Joker.

Sure, it sounded like a cool idea. It looked really cool. But did it actually make any sense? Lex Luthor was a super-rich genius who (depending on when you were reading/watching TV) used his intellect, wealth, and power to take down Superman, or wore a super-powered suit and created new forms of kryptonite lasers for the same purpose.

The Joker was pretty much always the Joker, albeit with less lethal techniques depending on the intended audience. Why they would be working together always seemed to elude me a bit. Their motivations and techniques were so different. Their goals seemed like they should be different. They only seemed to work together because the writers thought the readers would think it was cool.

Justice League #13 delivers as good a look into the Luthor/Joker dynamic as I have seen in recent memory. How the characters can work well together in a story is on full display, and the way in is through why they don’t work together well.

The issue opens with the early formation of Joker and Lex’s partnership. Joker is about to unleash his deadly toxin on a crowd of innocent parade-goers (classic Joker) when he is confronted with Lex Luthor informing him that he is impressed with his genius but disappointed at his scale of villainy and offering to give him more power than he can imagine. Joker agrees to the partnership with one stipulation, the Batman Who Laughs must be destroyed, to which Lex quickly agrees.

We flashback to the present for the remainder of the story. Lex is in his laboratory conducting an interview with a still-very-much-alive Batman Who Laughs. Meanwhile, Grogg, Chetah, and the rest of the Legion of Doom are conducting a massive recruitment effort, trying to bring in nearly every other major villain in the DC universe. Joker is on the base as well, hiding in the shadows, and is made aware of Lex’s failure to keep his word on executing the Batman Who Laughs.

The majority of the issue shifts into Joker enacting his revenge on Lex, poisoning the Legion of Doom with Joker Toxin and leading Lex through a series of death traps after dismantling most of his War Suit. James Tynion IV returns to the writer’s chair for this issue and manages to weave a straightforward, yet exciting and insightful, tale revolving around the two best-known villains in comics. As opposed to Justice League #12’s somewhat convoluted plotline, issue #13 shoots itself in a direct line, favoring to fill the story with high energy and action while illuminating the dark nature of these characters, with both their actions and their back and forth dialogue.

It really speaks to Tynion’s skillset that he is able to deliver a story that is so trim and fight scene centric while still providing quality character work. More than that, he uses the Joker’s own fiendish nature to further develop the reader’s understanding of the Batman Who Laughs’s nature, with whom I don’t think I have ever been less at ease with. I won’t spoil the ending, but it is fair to say that Lex’s backup plan for a fallout with the Joker will leave readers eager to see where the series is headed next.

The artwork duties for this issue are handled aptly by Guillem March. His pencils are filled with energy, not just in scenes of Lex desperately trying to escape a death maze or an all-out battle between Joker toxin affected Legion of Doom member, but also in a nerving racking moments of stillness in one on one conversations between Joker and Lex or eerily still tension of a restrained Batman Who Laughs. He has a clean and easy to follow hand here, but with enough nuance to remain visually interesting.

After a sub-par outing from the last issue of Justice League, the book roars back to life this week in a tale, that while light on Justice League members (they don’t even make a cameo) is full of cool reasons to want more interactions between history’s best villain. – Garret Grev

BATMAN BEYOND #26 Review by Matt Whaley