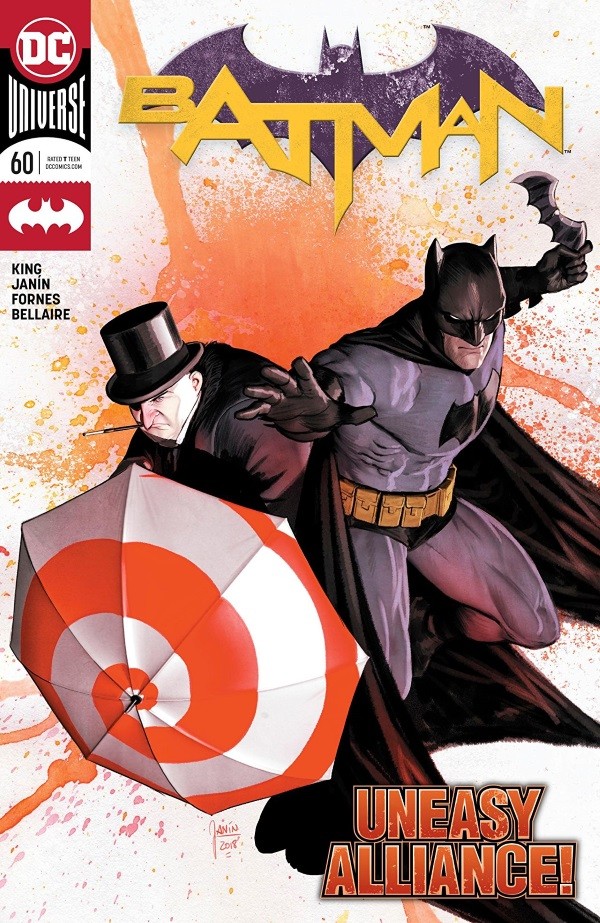 SYNOPSIS: Batman takes on a new partner, and it’s…the Penguin? After rejecting Bane’s crime-boss co-op, Cobblepot finds himself in the crosshairs of some very teed-off villains. The feathered felon turns to his old foe to snitch on Bane’s scheme but has to prove his intentions to avoid a Bat-beatdown. Along the way, this Gotham odd couple begins to bond—could there be a new bird joining the Bat-Family? Not if Bane has anything to say about it…

This is what a grizzled Harvey Bullock gruffly tells a frazzled Jim Gordon of our increasingly unhinged hero’s savage assaults on Mr. Freeze, KGBeast, Bane, and, well, Jim Gordon.

“Anything’s possible.” Gordon doesn’t want to believe his friend has fallen this far off the deep end.

But the evidence and the actions prove otherwise.

Across Gotham City’s rooftops, Batman brazenly brutalizes one Rogues Gallery goon after another for answers about The Penguin’s claim that Bane is running the entire town from a secret throne in the bowels of Arkham Asylum.

Beneath Wayne Manor, meanwhile, Alfred Pennyworth and a blindfolded Oswald Cobblepot discuss poetry and Oswald’s poor, murdered Penny over tea and sardines; Bane wanted to assassinate the former and now most certainly wants to erase the latter, and we all know how far Santa Prisca’s Patron Saint of Back-Breaking will go to get what he wants.

Writer Tom King ends this third chapter of “The Tyrant Wing” on a weird, wild note that still manages to shock, even though he already showed us this latest instrument of Bruce Wayne’s suffering in issue #50 and #58.

The Penguin/Pennyworth stuff is beautiful and bittersweet, while everything else is challenging and deeply unpleasant.

In my review of issue #59, I wrote that I hoped Gordon and Batman were secretly partnering to play some kind of long game against Bane, but this issue finds each of them equally doubling down on their rift. Maybe that’s still the case, but it isn’t looking likely.

Mikel Janín brings his usual dramatic and emotional mastery to the Gordon and Oswald/Alfred pages, with Jorge Fornés delivering raw, urgent intensity to Batman’s interrogations. Jordie Bellaire’s colors match the artists’ styles and intentions perfectly, from the warm shades in Gordon’s office to the green and blue hues of The Batcave to the variety she adds to the various urban locales in which Batman beats the living hell out of everyone who might have the slightest clue about Bane. Clayton Cowles’s lettering adds even more intensity to the gritty proceedings.

BATMAN #60 is hard, heavy, harsh, and harrowing; leaving us to wonder how much worse things in Gotham can get before they get better.

We’re a long, long way from OK, with no better guide through the grime than Tom King. – John Bierly