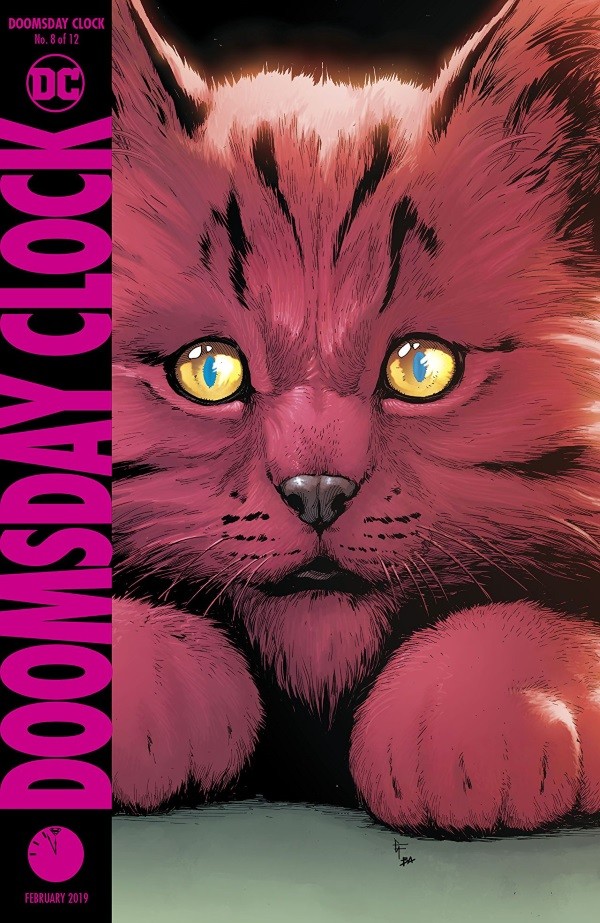 SYNOPSIS: The critical and commercial hit series by Geoff Johns and Gary Frank continues following the shocking revelations of last issue. As the truth behind Dr. Manhattan’s actions against the DC Universe are revealed, Ozymandias turns to the only being who can stop him: Superman.

The variant cover for Doomsday Clock #8 shows Ozymandias puppeteering a faceoff between Dr. Manhattan and Superman. By issue’s end, you realize that’s exactly what this issue is.

Not taking away anything from the deep ideas or emotions from the issue, but rather celebrating the delicate pacing from writer Geoff Johns and artist Gary Frank. Yet again, they take their time and deliver us the unexpected, making us happy yet frustrated by the final page.

This issue is mainly focused on Superman and one event.

In Russia (topical eh?), Firestorm has freaked out and caused a mass killing…or so the general public thinks. In reality, he has turned a large number of people into glass, and with Superman’s help, finds a way to reverse the effect. Unfortunately, people also tend to freak out, which results in the mass killing anyway, and the DC heroes receiving the blame. As Superman prepares for another Firestorm explosion, Batman cuts in to let him know that’s not the source of this new energy, and everything turns blue.

This series has been great from the beginning but required a little more patience at first as the creators were planting the seeds. I think everything is beginning to sprout and we are in a sprint for the next 6 months or so. The Man of Steel has been relatively absent thus far, and I’m really glad that’s beginning to change. By issue #12, we can reread the entire run and see how expertly Johns has crafted his involvement, and the perfect timing to start giving him the spotlight.

If you’ve followed Frank’s art, nothing new here. It’s remarkable. Everything is detailed, with extra emphasis on the characters’ emotional facial reactions. Each issue requires a second reading from me, so I can focus more on each panel.

Another top-notch effort from Geoff Johns and Gary Franks, as Doomsday Clock ramps up the action, drama, and tension. Sure, our patience has been tested, but it’s paying off in spades now.

I mentioned above about being frustrated, and that only relates to us having had to wait 2 months between issues. Well, lucky for us, the next chapter is scheduled for release in January, so turn that frown upside down because the Doomsday Clock is ticking a little faster. – Ryan Lower