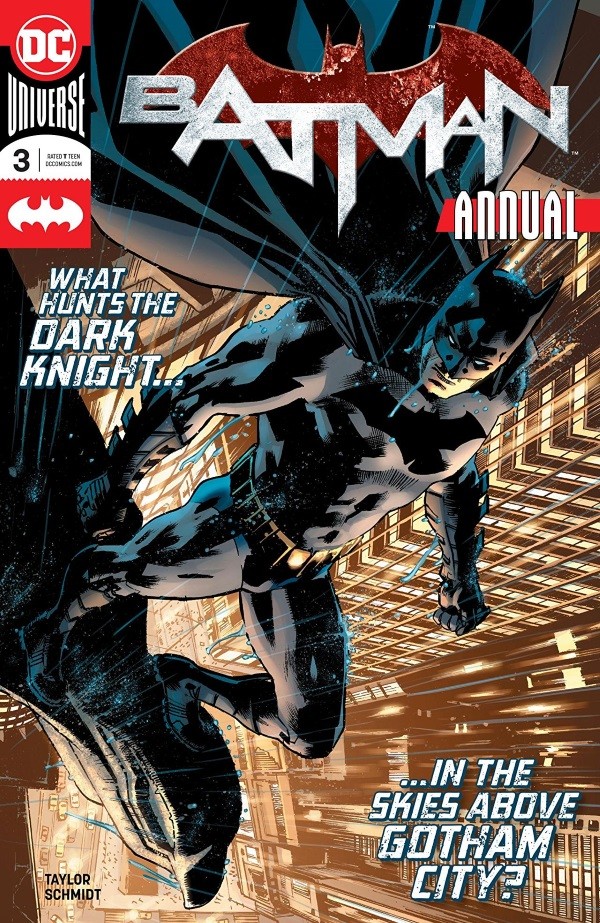 SYNOPSIS: “THE OTHER SIDE OF THE PENNY!” Alfred Pennyworth has been Batman’s most trusted ally and confidant since the Dark Knight first hit the streets of Gotham City. Now, witness Batman’s battle for justice from Alfred’s perspective and learn how harrowing that journey has been as Batman experiences one of the worst nights Gotham City has ever seen—a night that will push Alfred to the breaking point! Best-selling writer Tom Taylor presents an epic tale that promises to be one of the most Alfred stories ever told!

In last year’s second BATMAN annual of the REBIRTH era, Tom King and artists Lee Weeks and Michael Lark told a bittersweetly beautiful tale of Bruce Wayne and Selina Kyle sharing a long life of impossible love and inevitable loss. Little did we know at the time that King was showing us something we wouldn’t actually get in this summer’s non-wedding “wedding,” though the writer’s reign in Gotham City still has a long way to go. Alternate reality? Possible future? Anything’s possible. The issue itself was an all-timer. (You can find it collected in the infinitely recommended “Volume 5: Rules of Engagement” trade.)

This year’s annual finds writer Tom Taylor (INJUSTICE: GODS AMONG US, among many others) and artist Otto Schmidt digging into the dynamic between Bruce Wayne and Alfred Pennyworth, who begins the issue getting the phone call that something terrible has happened to Thomas and Martha Wayne downtown and realizing he’s about to shoulder something that, despite Bruce’s many “complexities,” he’ll only ever see as anything but a burden.

We transition to modern day with another call, this time from The Batman, who’s steering a high-flying and heavily armed Unmanned Aerial Vehicle (UAV) toward Gotham Harbor by slinging his weight around while hanging underneath it. It’s all in a night’s work for the Caped Crusader, except this time he’s also battling a raging case of the flu. Alfred’s quips are snarky and snide but delivered with loving panache in what’s some of my favorite writing for Alfred we’ve gotten in a while.

Alfred tells Bruce he needs rest; Bruce tells Alfred he needs the Batwing prepped. Gotham’s newest nemesis, The Drone, is a former Unmanned Aircraft Systems Operator who wasn’t happy when he discovered the truth about all those top-secret targets he was bombing with the drones he commanded. Now The Drone seeks to turn his creations against the industrial-military complex he once served, apparently without understanding he’s answering what he perceives as murder from above with… a lot more murder from above.

After a dogfight that leaves the flu-ravaged Bruce exhausted from hurling the Batwing around the skies against smaller, more maneuverable adversaries, the situation spins so far out of control so quickly that Alfred must take matters into his own hands the hard way. Both men end up in the care of Dr. Leslie Thompkins (who’s had a busy week, considering what happens to her in this week’s DETECTIVE), who separately speaks with both men about the how each manages his responsibilities to the other. The structure of the issue reminds me a little of SUPERMAN #654 by Kurt Busiek and Carlos Pacheco, in which a certain anniversary of Clark’s and Lois’s is revealed in the denouement. Taylor doesn’t reveal this issue’s timing or title until its final panel, and it’s utterly lovely.

Taylor’s writing reminds of me Scott Snyder’s in how he finds new angles and fresh ways to explore classic relationships we’ve been reading for decades, and he also evokes Tom King’s ability to nuke us from orbit with unexpected and effective sentimentality. But Taylor maintains a unique voice (particularly in his capable command of Alfred’s wit), undoubtedly from all those INJUSTICE issues that, by their very nature, forced him to consider these heroes just a little bit differently. He thinks outside of the box here, too, and it serves him (and his readers) well.

Schmidt does every bit of the art on his own, matching his detailed pencils with exact inks and colors for every occasion: the cooler blues of Leslie’s clinic, the dusky night skies tinged by city lights, the earthier colors in the Batcave, the cozy greens and browns in Alfred’s quarters in Wayne Manor. His faces are appropriately expressive, and his action is energetic and easy to follow.

(My only quibble is that what Batman refers to as a “Predator drone” is anything but; a “Predator” is specifically a General Atomics MQ-1, while these wicked little whirly-gigs evoke commercial designs. And regardless of what the text suggests, their lines are anything but stealthy. Again, it’s a minor thing that has absolutely zero effect on the story, but it might have been an opportunity for a little more synergy between editor and creators. The drones here look really cool, but it might have been more interesting to see some designs that better reflect the cutting edge of cranked kites and spooky triangles on today’s runways and drawing boards. What ultimately matters is that they are unique to this story and to the twisted master that commands them.)

You’ll get more than your money’s worth out of this extra-large, heartfelt, handsomely crafted annual from an exciting creative time that’s welcome in Gotham City any time. – John Bierly