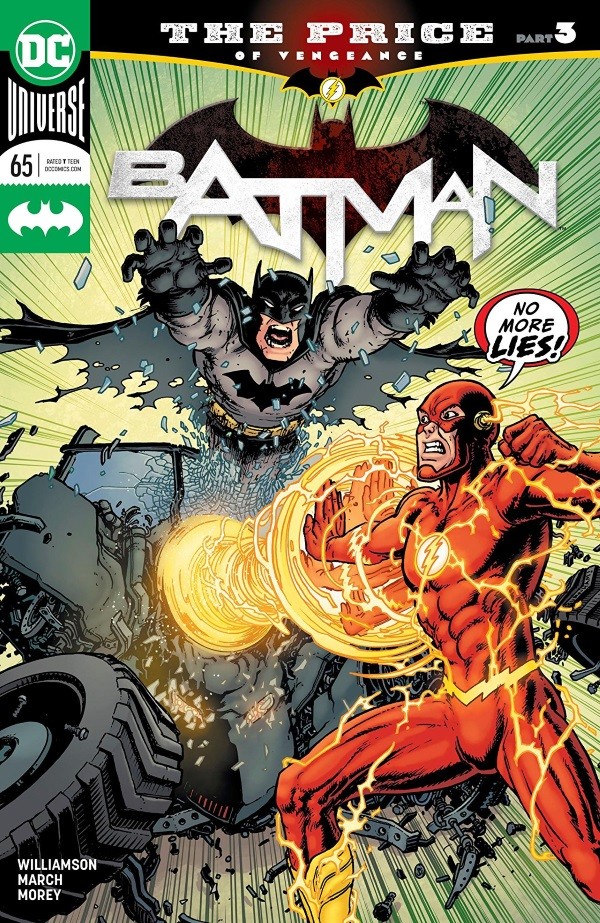 “THE PRICE OF JUSTICE” part three! The two greatest detectives in the DC Universe take on the one cold case that will tear them apart!

As chief architect of the Sanctuary program that cost so much for so many, especially Wally West, Batman will be held accountable…by the Flash!

A cold case from the Justice League’s past has mysteriously re-opened, and Batman and the Flash—the only two heroes who stand a chance of cracking the case—are at each other’s throats! Our heroes must combat a demon from the past while burying their own inner demons in the process…and neither the World’s Greatest Detective nor the Fastest Man Alive will ever be the same again! But who is really pulling the strings here? And how does Gotham Girl fit into all this? Friendships will be tested and blood will be spilled in this titanic crossover event…

With Tom King taking a two-issue break from the wonderfully wicked and wickedly weird “Knightmares” to work on “secret TV stuff,” it falls upon Joshua Williamson to write not only his own regularly scheduled issues of THE FLASH but also a couple of extra issues of BATMAN.

Luckily, he knows the subject matter well. “The Price” is another Batman/Flash crossover; Williamson and King previously teamed for “The Button” in issues 21 and 22 of both BATMAN and THE FLASH, and this time Williamson is doing it all on his own.

What began two weeks ago in BATMAN #64 continued in last week’s THE FLASH #64 and jumps to this week’s BATMAN #65 before concluding next week in THE FLASH #65. If you’re going to punctuate a story like “Knightmares” with a crossover that not only has nothing to do with it but also takes place before it, the crossover needs to be deserving. And if you’re going to make us buy books we might not normally read, the story had better be worth the additional cost. Williamson has us covered on all counts.

BATMAN #65 requires reading THE FLASH #64, in which Batman and Flash discover a secret jungle island housing an ominous castle with a depraved laboratory filled with failed (super)human experiments deep in its bowels. When Gotham Girl attacks them at issue’s end, she doesn’t attack alone.

BATMAN #65 begins with Gotham Girl reimagining her origin with herself as the hero of her own story before slamming back to the reality of Batman and Flash battling irrevocably damaged but still infinitely dangerous copies of Gotham Girl and her brother, Gotham. And throughout the harrowing melee, our heroes have a lot to haggle over in the aftermath of the first few issues of HEROES IN CRISIS, which is yet another book you’ll need to read for all of this to make sense. Let’s just say that Batman’s bearing guilt, Flash is weathering grief, and, as always, one landed punch from the enemy will spell either man’s end.

Through it all, Flash chastises Batman at every turn. Barry blames Bruce for what happened in HEROES IN CRISIS. Barry blames Bruce for the fall of Gotham Girl and Gotham (and so many of his other students over the years). Bruce just wants to save what’s left of Gotham Girl’s life; her mind already teeters on the edge, while every use of her powers brings her one step closer to burning out forever. He might have had a chance if he and Barry had kept the battle contained in the castle, but Gotham Girl takes it to Central City…

What happens next is thrilling, suspenseful, emotional, and bursting with big action and high stakes. Guillem March draws it all with gusto, instilling each face and every fight with visual dynamite. He captures Barry’s speed, Batman’s power, and Gotham Girl’s tragedy with captivating compositions capably colored by Tomeu Morey. I especially love how Williamson’s words (lettered by Steve Wands) combine with the March/Morey artwork to create the intensely exciting pages across which Bruce is desperately pushing the Batwing past its limits to make it to Barry’s side in time.

Crossovers are exhausting and expensive, especially when they’re dropped in the middle of a story like “Knightmares” that no reader wants to see interrupted. But Williamson and March are telling such an exciting and emotional story here that I’m glad to be along for the ride — and more than happy to fork over the cash for next week’s big finale in THE FLASH. – John Bierly