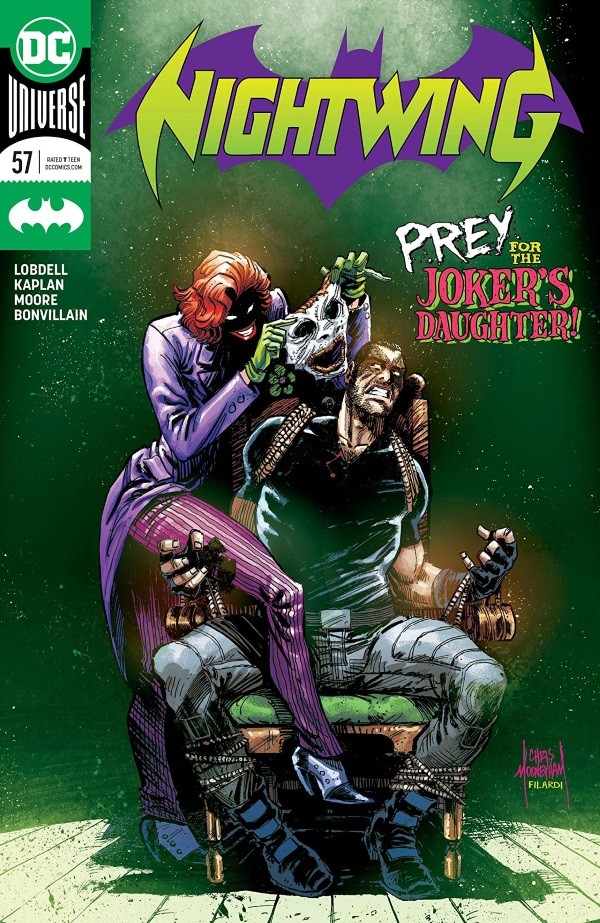 SYNOPSIS: Destiny…fate…predetermined inevitability… these are all things that Ric Grayson has struggled to reconcile now that he has been given a second chance at life. A life recently unburdened with years of trauma, defeat and struggle when the hero known as Nightwing was shot in the head. Now, Ric must come to terms with who he is, and what kind of hero he wants to be…if he wants to be one at all. And while Ric is content to walk away from the mantle, one woman has been hiding in the shadows, waiting to solidify an identity of her own…an identity tied for all eternity to the clown price of crime…enter The Joker’s Daughter!

Ah, after more than a month on break, Nightwing returns to comic book shelves across America!

We open with Ric Grayson enjoying a peaceful walk with his girlfriend Bea on a snowy evening. Grayson is still processing his last-minute decision to aid the new Nightwings in defeating the Scarecrow’s attack in NIGHTWING #56. It’s a seminal moment for Grayson, who is beginning to tire of just thinking about himself and appears ready to help others again.

We get a lot of panels recapping events from NIGHTWING #56, appropriate since we got our last issue way back on Jan. 9th.

I was relieved when Grayson and Detective Sap, leader of the new Nightwing team, have a moment where they’re suspicious of one another and uncertain if they can work together. I was worried the writers would rush a Grayson/new Nightwings team-up and appreciate that the original Nightwing and the new guy are taking things slow.

While Grayson ponders his future we get more background info on Bea, who truly is the heart of this issue. So far we’ve only seen her as a bartender at the Prodigal Bar. Here we find out that she grew up homeless and is planning to attend a public forum to speak out against Councilman Pollard’s plan to close a local shelter and build a sports arena parking lot.

Bea argues that the proposal will rob 40 percent of Bludhaven’s displaced families of living space, make housing more unaffordable and hurt area businesses. Pollard, whose last name incidentally means to cut off branches to encourage new growth, says the arena is an investment that will bring jobs.

Following the forum, Pollard has a bad run-in with Duela, “The Joker’s Daughter” and our new antagonist.

Talk about having the wrong impression of a character, I thought Duela was going to be a homage to an abandoned Batman movie script from the late 90’s.  Prior to BATMAN BEGINS, there were a few ideas kicked around to continue to Burton/Schumacher continuity and I vaguely remember a TV blurb that one of the villains was going to be the Joker’s Daughter.

Turns out I was way off.

Duela has a long history in the comics (pre-Crisis and post-Crisis) that I had never heard of. She has claimed to be the daughter of multiple DC villains, most notably The Joker but also Catwoman, Two-Face, Penguin and The Riddler. She also went under the name “Harlequin” years prior to the creation of Harley Quinn and aided the Teen Titans.

As much as I believe that we have an oversaturation of Joker material (surely a topic for another day), I have a good first impression of Duela! I dig the return of the cut-off-Joker-face look and she seems like the kind of secondary character, like Defacer and the Run-offs, who typically shine in Nightwing comics.

Hop over to your local comic book store and check out the latest chapter in Nightwing’s story! – James Armstrong