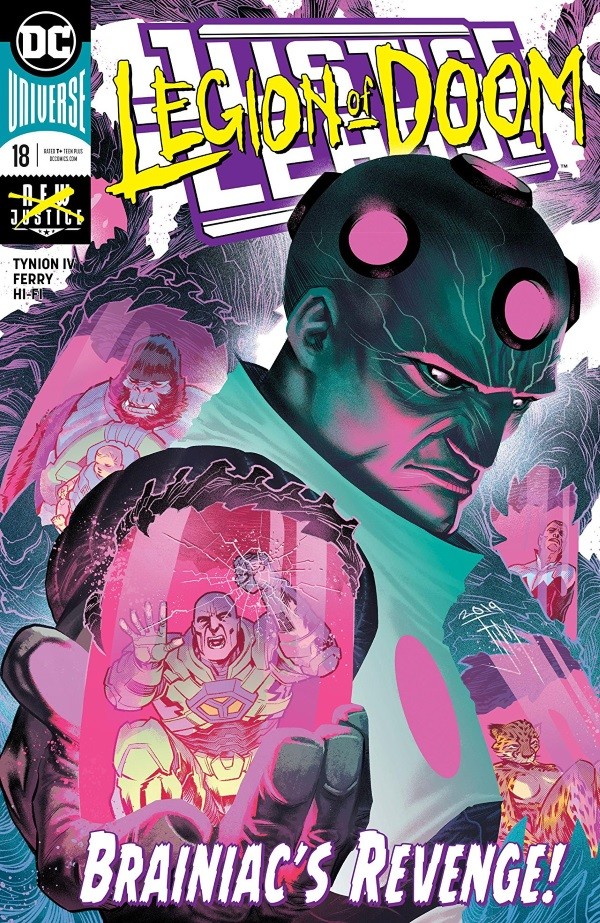 SYNOPSIS: The Legion of Doom returns as the history of the Legionnaires Club is revealed! Lex Luthor’s mysterious connection to this ancient secret society runs deeper than even his Legion of Doom comrades ever suspected, and his secrets threaten to destroy everything. A blood connection to the dark underbelly of the DCU’s history bubbles to the surface in this epic, villainous tale.

Imagine you were on an alien world with a sworn enemy who, while you’re on the verge of being devoured by monsters, informs you that you shared a secret childhood that had been erased from your mind where the two of your were prisoners in an experimental lab run by your father. What would you do with that information?

Justice League #18 delivers the story of how Lex Luthor responds to that scenario. In the previous issue, Martian Manhunter informs Lex of all this and more. His response is to return to the Legion of Doom headquarters and interface with Braniac in his continued quest to awaken Perpetua. To do so, Lex needs Braniac’s help and the issue opens with Luthor screaming in pain as the Legion of Doom installs the necessary hardware for the two villains to merge minds. Unfortunately, Braniac has other plans that include taking over Lex’s body and mind to puppet as he pleases.

James Tynion IV is back in the writer’s chair for this issue of JL, and the structure of the narrative feels eerily similar to Scott Snyder’s previous issue. Two characters are coming together, both with different goals and motivations, and having an extended conversation in a peerless situation that serves to deliver previously unknown information on the larger story at play in New Justice. The conversations narrate a trip through time and space, jumping back and forth between extended flashback sequences and the present moment. The focus on multiple levels of reality is present again as well. Here, the characters start in the “now,” move to a mental “sub-space” of reality, travel through time to see a secret history unfold, and move to the issue’s conclusion.

There is almost no way that this choice is unintentional and it carries on something the series has done a nice job of previous; the interpersonal character moments are used to tell the reader more about the multi-universal scale action taking place in the overall narrative. The use of memories as pockets of reality continues as a theme, as well as weaving this tale throughout the fabric of DC history. The yet unanswered question is what this stylistic choice is telling the reader that we aren’t aware of to this point.

The interaction between Braniac and Lex is enjoyable here, even if the characterizations feel a little unfamiliar. Readers are used to Braniac as the symbol of unfeeling control and knowledge, but this Lex is an acolyte of Perpetua, a true believer, even if the reader is not yet sure what exactly that belief is in. Ultimately a choice is required to move forward and it necessitates that a character make a choice readers are not used to seeing. I’m not certain if that choice is ultimately earned by the actions in this particular issue, but I’m very eager to see their repercussions.

I will say I’m eager for this segment of New Justice to kick into the high great that was set up in Justice League Annual #1. We’re two issues further along, and those books have been dialogue and narration heavy. We haven’t learned much more about the nature or intentions of Perpetua. For all the concern around her breaking free of the Source Wall, she’s still lying dormant. Luckily, the final panel of issue #18 seems to be opening the door to the next phase of her story.

Pasqual Ferry serves as the issue’s artist, and the work is gorgeous. Ferry’s pencils are as dynamic as ever with his characters always in a state of motion. Stylistically, his exaggerated reality approach feels cartoony in all the best ways with smooth and liquid-like lines and heightened character features. For an artist with such a polished approach, there is no lack of details or textures. The rich and vibrant color’s by Hi-Fi are an excellent fit and the book has almost a pop-art feel to it.

BATMAN: THE LONG HALLOWEEN – All the Info You Need to...