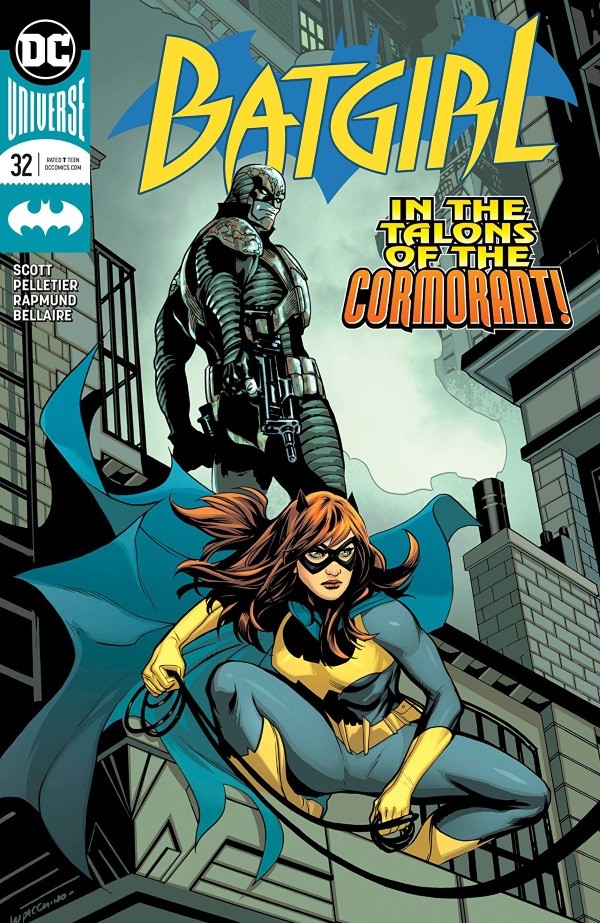 SYNOPSIS: Coming to you live from Gotham City! The people’s-choice congressional candidate Luciana Alejo is all set to give a televised interview that could secure her victory, but the Cormorant is ready to silence her for good. Can Batgirl protect the candidate without making her alter ego, Barbara Gordon, lose her campaign job in the process?

I’m going to put it right out there that I didn’t enjoy this issue. I was feeling optimistic about the story after the last one, but this month didn’t deliver on that anticipation. There’s nothing really bad or offensive here, just a lot that doesn’t read well. I really hate be so negative, but I’ll do my best to examine the things that stick out.

To start with some of the action, there’s a bit of a soft cliffhanger where we see Cormorant with his gun trained on an unsuspecting Batgirl. Two pages later, she’s down on the ground with Cormorant escaping to complete his mission. After some drawn-out tension, Batgirl shows up just in time to stop Cormorant from taking the shot. Apparently, he shot her in the back but she was only knocked out thanks to her body armor.

Well… okay then. I know it’s a comic book and all that, but this is some goofy cause and effect. One kind of fun thing in this sequence is that Barbara stops Cormorant from shooting by throwing an apparently exploding Batarang at him and blowing off three of his fingers. It’s gratifying to see this dude thwarted in such gruesome fashion, but also seems uncharacteristic for Batgirl.

Later, there’s a scene here where Barbara shares an emotional moment with Izzy, who to this point has been purely antagonistic. It’s unclear whether Barbara is sharing a genuine moment of vulnerability or if she’s just playing Izzy for sympathy. I think it’s meant to be genuine, but I don’t buy these two confiding in each other based on their prickly interactions thus far. This is the second emotional beat that’s confusing to me, following an earlier conversation during which Jason Bard seems to feel embarrassed or called out that he offended Batgirl. I don’t know why he would be because he’s been adversarial toward her the whole time, and I also don’t understand why he reacts this way to what Barbara said immediately before.

There are several things in this issue that just don’t make sense to me. While it’s not a bad thing for the reader to be lost in the middle of a mystery, I don’t feel like Barbara is as lost as I am and we’re supposed to be figuring things out along with her.

This issue is titled “Old Enemies – Finale”, but there’s no climax or closure here. It feels more like a midpoint, and that makes sense with this being only the third issue in the story arc. A note at the very end of the issue states that the next issue will be a special tie-in to “The Batman Who Laughs”, so I’m thinking the editorial crew decided that “Finale” would make it seem less like they’re breaking up a story by plopping an event crossover issue right in the middle. Well, I enjoy a good self-contained story so maybe that’s what we’ll get next month! – Rob Veatch III