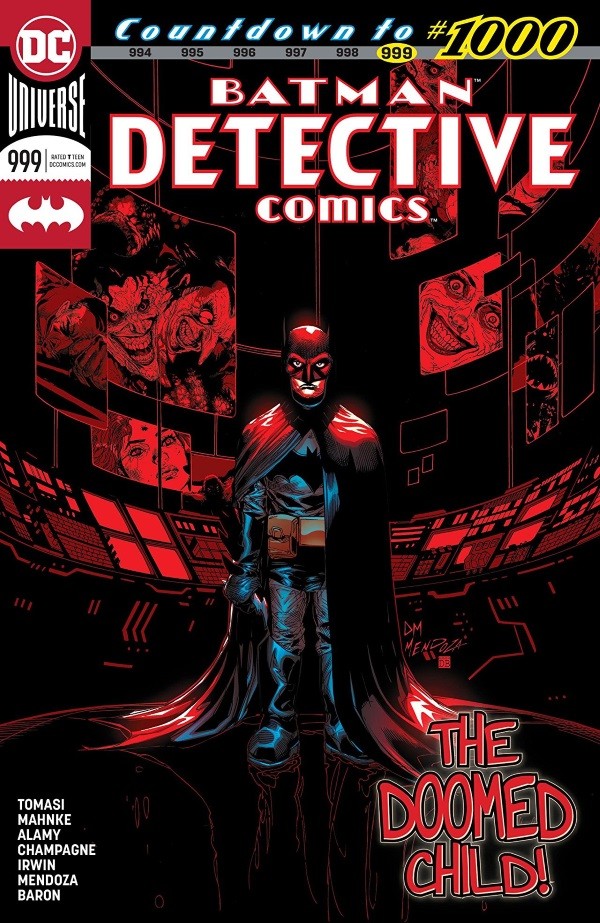 SYNOPSIS: The truth behind the gauntlet Batman has been forced to run—a violent odyssey that endangered the lives of everyone who made him who he is—is revealed at last…and the mastermind working to unmake the Batman must be seen to be believed! Is there a goal here beyond destruction? Will Batman emerge stronger…or with a mortal wound at the exact moment that his most dangerous challenge yet is on the horizon in next month’s DETECTIVE COMICS #1000?

We have been following Batman on a mysterious journey searching for someone who has been using his mentors to break him down.  With a constant two-step lead on The Dark Knight, this must be someone close to him. Sadly, the reveal falls flat and seems more like a rerun than a fresh take, leading me to wonder; “should we have expected this after the final page of #998?”

I won’t lie to you. When the dust settled near the end of the book, I felt a tad let down. I was hoping for an epic showdown with a classic villain who was ready to get his due for a new generation.  This felt like another Grant Morrison-esque story dissecting the how and why of Batman.  Here, it just feels like a bit of overconfidence on the Tomasi’s part. He’s written a story that feels as if we have been here before.  No consequences, none of it was real. It feels like we have sacrificed a story that could have had an interesting twist ending for your typical “We are gearing up towards a memorial issue of the character’s history.”

I don’t want to sound like I’m completely bashing the book, because Tomasi has written a wonderful Bruce Wayne story.  I do enjoy these self-reflecting stories that our hero goes on, “Honing each and every skill set I’ve learned to its maximum efficiency.”  Seeing the prep work and the mental stability one needs to be Batman is always interesting. I’m of the mind that questioning Bruce Wayne’s sanity is always a good debate.  It is wonderful to see how he knows what he’s doing, and has a plan and a reason for his actions, even though he refuses to let anyone else in on them.

The emotional aspect of the story should not be overlooked: Batman burying a young Bruce Wayne next to his parents.  Symbolizing how the sacrifice of young Bruce Wayne will save hundreds of lives over the years is tragic, utterly tragic.  Tomasi knows this character like the back of his hand and it shows in the last four pages. With Alfred and Robin going over his most recent plan (the 2.1 Landscape), Batman addresses how his mission might have an end and how “Absolute zero deaths” is the ultimate goal. The Nolan influence runs deep.

The magnificent Doug Mahnke again honors us with some damn fine pencils.  The artwork is so clean and sharp. From young Bruce in the cemetery to a pretty cool Weapon X tribute, Mahnke never disappoints.  Splash pages and wonderful panel placement tell a grand visual story and will surely please the lock screen digital crowd. My only nitpick is the panels in the cave with Robin and Alfred. They were too small. Those were the essence of the book and it feels like they got the short end of the stick. Otherwise, just another fantastic book artistically. We are getting spoiled.

While I do stand by that this was a bit of a letdown issue, I will say there are some damn good Bruce Wayne moments inside. As usual, we are graced with arguably the best-drawn book on the market thanks to Doug Mahnke, the inkers and the colorist. It’s an interesting story for those who haven’t been here before. I think it’s the weakest issue by Tomasi to date and that is fine, it happens.

Batman to be Older in BATMAN v SUPERMAN (Exclusive!)