SYNOPSIS: Bruce Wayne becomes a member of a secret society of detectives to battle the decade’s old criminal conspiracy that left him an orphan in this stunning original hardcover graphic novel! Babe Ruth, Teddy Roosevelt, Selina Kyle, and others are just a few of the players in a Batman story unlike any before.

When I first thought of doing this “Best of Batman ELSEWORLDS” series here on BOF in honor of Batman’s 80th anniversary/birthday, I called dibs on 2 of ’em to review/retrospect upon: GOTHAM BY GASLIGHT and DETECTIVE No. 27.

BATMAN: DETECTIVE No. 27 was written by BOF’s great friend — Michael Uslan — with Peter Snejbjerg (pencils and inks) and Kurt Hathaway (letterer) and was one of the last Batman tales released under the ELSEWORLDS banner in 2003.

While I’ll let Mr. U do most of the talking here, the premise is that Bruce Wayne never becomes Batman (missed the inspiration to do so by pure happenstance — read the GN to find out), but does become the “World’s Greatest Detective.”

The entire story is set in between the end of the American Civil War up to the beginning of World War II, with Bruce Wayne coming into his prime in c. 1939 — a year which of course has very important Batman historical significance.

BATMAN: DETECTIVE No. 27 is one of my favorite Batman stories of all time.  As a former football coach/history teacher — and lifelong history buff to this day — this tale was right up my alley.

If you’ve never read it, find a copy of it and, well, read it.  It’s a MUST for every Batman fan’s graphic novel collection.

Now, I’ll turn things over from here to the great Michael Uslan, but one more thing… 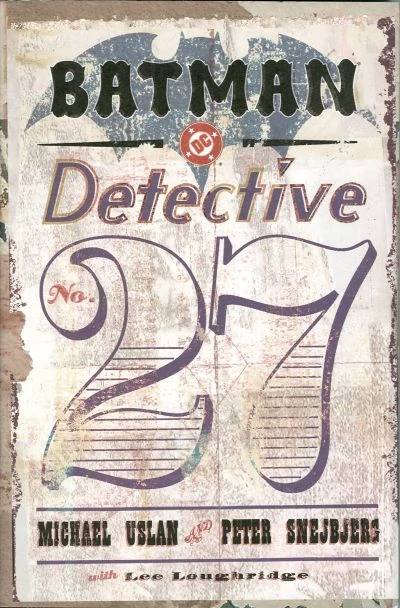 When I took on this project, I sent Peter [Snejbjerg] some 260 pages worth of reference so that every scene, suit of clothes, historical figure, et al would be historically accurate.

Mike Carlin was the greatest editor to work with! He was the one who said it needed a romantic interest and so I added in Catwoman/Selina. The title was inspired by the pulp magazine, OPERATOR #5.

I felt that Alfred had never before been fully explored as a character, so I modeled him on my father and on my father’s words.

A number of articles back in the day pointed out a number of similarities of the theme and the use of fear that later appeared in BATMAN BEGINS.

The reviews at the time were pretty awesome and nobody seemed to anticipate the surprise ending. The book sold out its hardback and trade paperback editions and I have considered it a great mystery as to it not ever having had further printings.

I was told it was the first comic book/graphic novel do you have historical footnotes.

I love history and I am a former history major. I love reading historical fiction and was inspired by THE ALIENIST, CARTER BEATS THE DEVIL, RAGTIME, and books of this nature.

I have carried this forward in later graphic novels I have written, including THE SHADOW/GREEN HORNET: DARK NIGHTS; JUSTICE, INC., and, THE LONE RANGER/GREEN HORNET: CHAMPIONS OF JUSTICE. – Michael Uslan