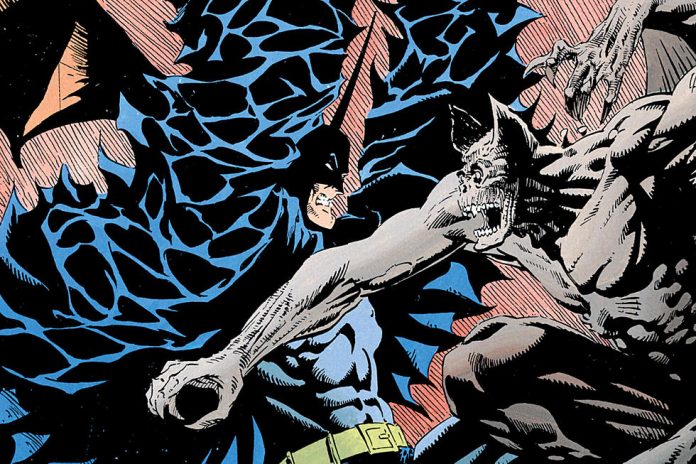 It’s a match made in…heaven? 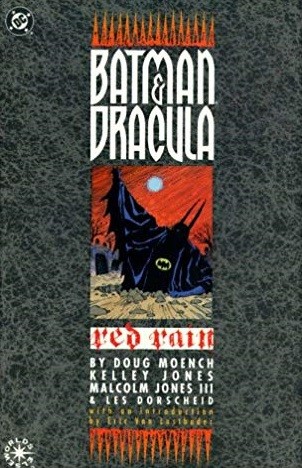 As a huge fan of the ELSEWORLDS titles and an even bigger fan of the horror genre, the BATMAN: RED RAIN TRILOGY (also consisting of BLOODSTORM and CRIMSON MIST) is right up my alley.

For my money, Doug Moench is near the top of the list of best Batman writers. Not only did he co-create the infamous villain Black Mask, but he was also a major contributor to the KNIGHTFALL, CATACLYSM, LEGACY, and CONTAGION storylines among others.

Kelley Jones frequently collaborated with Moench on BATMAN; he drew the covers for many KNIGHTFALL issues, worked on tons of other DC books including some DEADMAN, SWAMP THING, SANDMAN and a lot of non-DC work as well.

As iconic as it now is, Jones’ art is incredibly divisive; some call it grotesque, while others call it eccentric. From the absurdly long ears to the claw-like fingers, there’s no denying that it’s different.

Personally, I like it a lot. It’s very obvious that Kelley Jones is a fan of classic horror films (especially early German expressionist films and the classic Universal monsters) and in titles like this one and HAUNTED GOTHAM, the horror movie inspired aesthetic just works.

As a team, Moench and Jones do a great job of blurring the time periods to make Gotham feel like both present day (er, 1991) and the classic Dracula time period at the same time. As I said, Jones’s artwork fits this kind of story very well. It’s dark, it’s gritty, it’s everything that you want out of a horror comic.

So, strap in Bat-fans, as we take a trip through BATMAN & DRACULA: RED RAIN!

(Be warned, there will be SPOILERS ahead!) 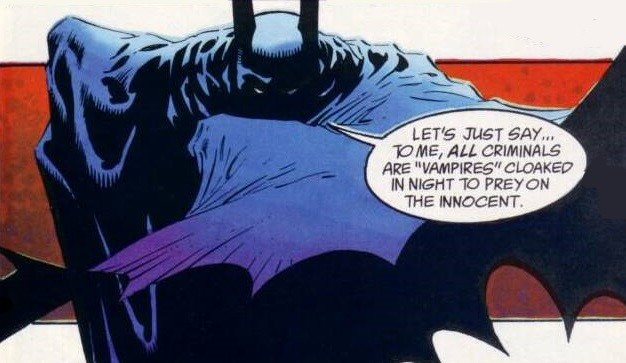 Crimson rain has been falling and the destitute are being killed, just a regular night on the streets of Gotham. The only difference is that this is just the most recent in a series of murders with all the victims having their throats slashed. Bruce spends his days asleep, having visions of a woman manifesting from mist that has crept in through his window, while his nights are spent (unsuccessfully) looking for the serial killer.

Dracula has come to Gotham and he’s sending his underlings out into the night to abduct runaways and the homeless to expand his army of the undead. Dracula’s minions always slash the throats of their victims on the streets in an attempt to hide the bite marks and the nature of the crime.

Meanwhile, the mayor refuses to reveal the attacks to the public (much to Gordon’s chagrin) due to the already high crime rate of Gotham (shocking, I know). So, Drac and his army are able to go on a feeding frenzy without the general public becoming any the wiser.

Bruce’s visions continue and that night while on patrol, he discovers that something is amiss in the form of increased strength and a slight aversion to sunlight. He soon discovers the vampires “living” in the sewers and decides to flee rather than attempt to fight a small army of the undead.

Later, while being attacked by the undead in the sewers, the woman from the mist, who we learn is a former Dracula disciple named Tanya, and her crew of vampire killers, The Others, come to his rescue.

Shortly thereafter, they are confronted by Dracula, who, using mind control, attempts to make Tanya and her squad commit suicide using their own oak stake guns, but Dracula is attacked before he can succeed.

Falling to another part of the sewers, Dracula slashes Batman’s abdomen open and Batman, using the attack to his advantage, uses his blood to draw a cross on the wall behind him, leaving Dracula at a stalemate, salivating for the blood, but repulsed by the cross.

After several hours, the morning sun forces Dracula’s retreat with Dracula vowing to have Batman’s blood at their next confrontation.

During her next nighttime visit, Tanya reveals that she has slowly been imbuing Bruce with the increased strength of a vampire, without the bloodlust associated with the condition as he is the only hope to defeat Dracula in Gotham and end his reign of terror.

As Bruce loses more and more of his humanity, he takes on a much creepier appearance, with some panels clearly inspired by shots from the iconic 1922 film NOSFERATU.

Alfred begins to take a more central role in the story as he notices the changes happening to Bruce and expresses both concern about his condition and disbelief in the possibility of vampires. You really have to feel for the character, especially later in the story, as he witnesses Bruce losing more and more of his humanity.

Meanwhile, Tanya’s backstory is expanded upon. She was a minion of Dracula centuries ago, but after seeing him prey on a child, fled and over the next few centuries, concocted a blood substitute to wean herself off the need to feed on the blood of the living, and sought out other victims of Drac to rebel and hunt him down. All of this feels very much like the old Hammer horror Dracula films starring Christopher Lee.

Batman, Tanya, and her crew call Gordon for a rendezvous where the existence of the undead menace is revealed to him. Our hero collapses from an unknown cause and when he comes to, he discovers that he’s undergone a blood transfusion with Tanya and that Dracula’s minions have kidnapped Bruce’s “friend.” He bolts through the mansion in search of Alfred who was on the phone with Bruce’s doctor about his blood work. The vamps bust in and Bruce dispatches them with ease in bloody fashion. It’s at this point that Bruce realizes from a news report that the “friend” Tanya was referring to wasn’t Alfred, but Gordon.

As Dracula slowly bleeds Gordon to death and speaks of the foulness of Gotham City, Bruce, Tanya, and The Others, devise a plan to rid Gotham of the army of the undead in order to go one-on-one with the vampire lord himself. With the blood-suckers trailing him through the sewers, Batman blows the walls en-route to the Batcave, then, as the morning light rises above the horizon, blows a hole in the roof of the cave and destroys most of the army in spectacular fashion. The lone remaining vampire is dragged into the sunlight by Tanya, killing them both. Bruce then enters a blast chamber and blows up the rest of the mansion.

Later, as cleaning crews are sorting through the wreckage and discussing the apparent death of Bruce Wayne (the destruction, written off as a tremor that caused a cave-in), Bruce sneaks away to a brownstone in the city that Alfred had been instructed to set up as a safe house and new base of operations.

This is another one of those moments that you feel terrible for Alfred as a character. The anguished expression on his face after losing the home that he’s lived in for so many years, and had so many memories in, is a testament to just how good Kelley Jones is as an artist.

Bruce arrives at the brownstone and informs Alfred that he’s going after Dracula once and for all, and as Alfred laments the loss of the Batmobile, Bruce produces a pair of bat wings out of his back, living up to his namesake.

As the Bat-Man goes after Dracula, he thinks of the sacrifice Tanya made, and, unbeknownst to him, Alfred follows him by car. After reaching Dracula’s new base of operations, a large, castle-like tower surrounded by bats, he sinks a silver Batarang into Drac’s head and begins the fight. Physically outmatched, he continues to use silver to injure Dracula and force him to take the fight to the skies, before freeing Gordon.

Silhouetted against the night sky, Dracula has shed his human form in favor of his
monstrous bat-like figure. Still vastly outmatched, Bruce is bitten deeply and loses a lot of blood. The crimson rain begins to fall and a storm brews.

(Conveniently) lightning strikes an oak tree turning it into an impromptu stake which Bruce is able to impale the vampire lord on as Dracula lets out a shriek that “could only be voiced by one who has lived so long…and has wielded a power beyond the world’s measure.”

Bruce then collapses and dies from his blood loss as Alfred catches up to him, screaming in anguish.

A week later, the mayor announces his resignation, Bruce is pronounced dead, nine-tenths of his estate is bequeathed to charity for the homeless, while the other tenth is given to his loyal butler and caretaker. Alfred further laments the loss of Wayne Manor as he descends to the dungeon-like basement of the brownstone where the now undead Batman is lying on a stone slab having fully embraced vampirism saying “Bruce Wayne may be gone…but the Batman will go on…forever…” 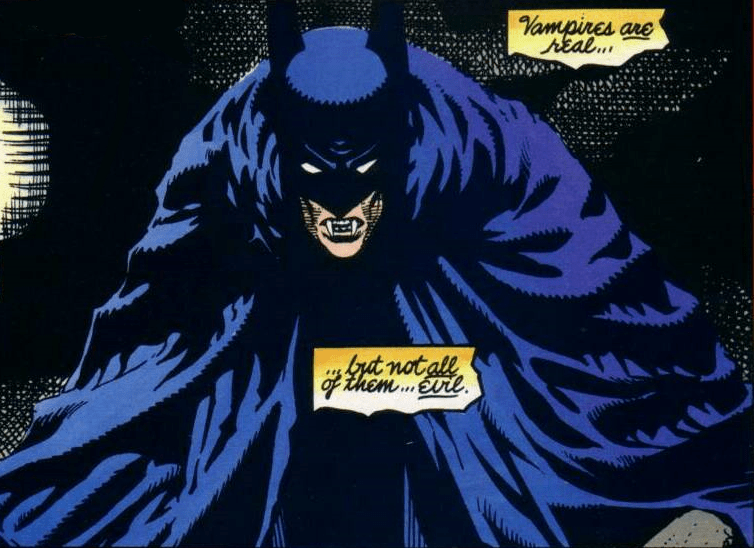 If you’re a fan of the horror genre at all, this book is a real treat.

There are some plot holes (how does the entire vampire army figure out that Batman is really Bruce Wayne?), but that’s where you have to suspend your disbelief and just enjoy the ride. i

It’s a book about a guy dressing up as a bat to fight vampires after all. – Matt Whaley