The Dark Knight has been around for a decade. In honor of my favorite movie of all time, I wanted to celebrate the big anniversary on July 18 by putting together a “best of” list. Now, limiting anything from The Dark Knight to just 10 is nearly impossible. The film has many outstanding lines, moments and images, how could I create a “Top 10” list? I asked myself: “What moments in the film had the biggest impact on me upon my first viewing, and still to this day?” Not my favorite, or coolest, but the most impactful.

After a lot of debating, and shifting my order, I have created a list that will only satisfy me until tomorrow. I believe the following 10 (and 1 honorable mention) impacted me the most upon viewing The Dark Knight (CLICK HERE for Part 1).

What’s happening: Batman is racing to save Rachel. He arrives at the warehouse, kicks in the door, and sees Harvey laying there instead. The Joker lied to him about who was at the address.

Why the impact: What a genius twist! Nolan leads us to believe Batman is going after Rachel (duh), inter-cutting between him, Rachel, Harvey, and Gordon (who is going after Harvey). To add to the visual shock, the Joker’s theme immediately starts playing, a major “HA HA” to all of us watching.

What’s happening: Harvey has Gordon and his family held at gunpoint. In a misplaced idea of fairness, he flips a coin to see who should get shot and who shouldn’t. Batman is up first, and is shot by Harvey.

Why the impact: I don’t expect many to go along with this one, but hear me out. Harvey is already giving a heartbreaking, emotional speech but we’re still seeing some hope that he’s not fully gone. However, the immediacy in which he pulls the trigger after the coin lands tails-up is shocking. Zimmer’s score matches Gordon’s sad whimper, erasing any hope that Harvey Dent is alive. Instead, he’s purely Two-Face. 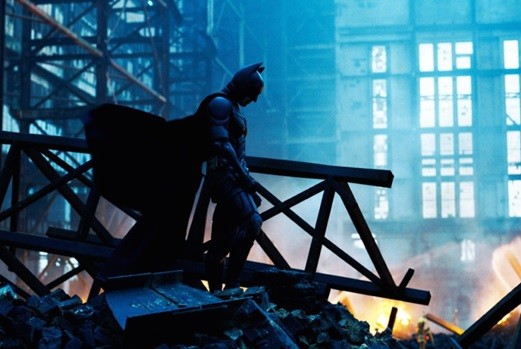 What’s happening: Rachel’s letter to Bruce is being read to us, as we see Batman standing on the rubble where she died.

Why the impact: Pure imagery here. I love the framing of this shot, the coloring, Batman’s cape slowly blowing in the wind. We the audience is exhausted and drained, as is The Dark Knight himself. This may not be up as high on anyone’s else’s list, but it’s near perfection for me.

What’s happening: We just found out Harvey and Rachel are missing. Gordon is going to question The Joker, but needs a cup of coffee first. He leaves, the lights come on, Batman is standing behind him.

Why the impact: My favorite scene in a comic book movie. Also my favorite image from the film, and possibly The Dark Knight Trilogy. There was a collective gasp in my theater upon my first viewing, as everyone was blown away by this shot. It’s not emotional, or heartbreaking, or draining, but gives me a rush every time because it is surprising and badass. Not to mention knowing what happens throughout this scene makes me love it even more. While it’s my favorite, it’s not the most impactful.

What’s happening: Batman is on the run, escaping the GCPD. Gordon is giving an epic speech to his son on what the Batman stands for and the sacrifice he’s just made.

Why the impact: This wraps up what our hero is. He’s willing to do whatever is necessary for the good of Gotham and its people. It’s heroic, unexpected and emotional. As Zimmer’s music swells, I had one hell of a “whoosh” through my body. The end speech here summarized what our hero stands for better than I think I ever could. I love it.

So there you have it. My 10 (CLICK HERE for Part 1, #’s 10 thru 6) most impactful shots from The Dark Knight. I don’t expect many to fully agree with my list. Regardless, I think we all can come to the same conclusion: The Dark Knight has impacted us all in more ways than one. – Ryan Lower