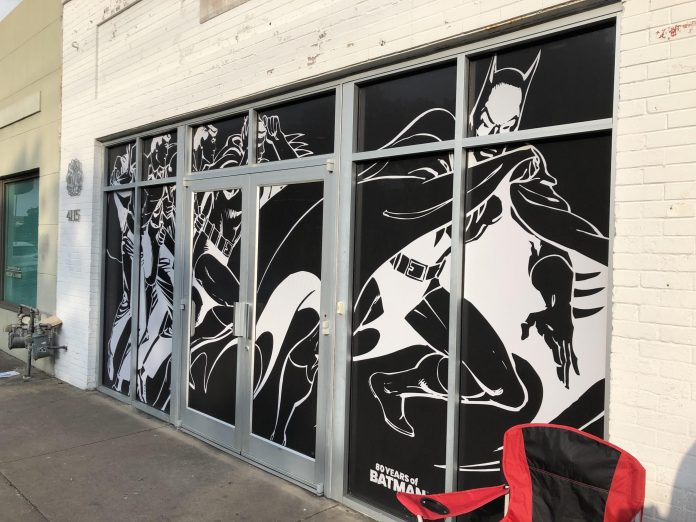 Once again, Mondo is holding a gallery in the Bat City herself, Austin, TX!

Opening on May 17th and closing May 25th, the exhibit is showcasing 18 illustrious covers from across Batman’s glorious 80 year (so far) career. 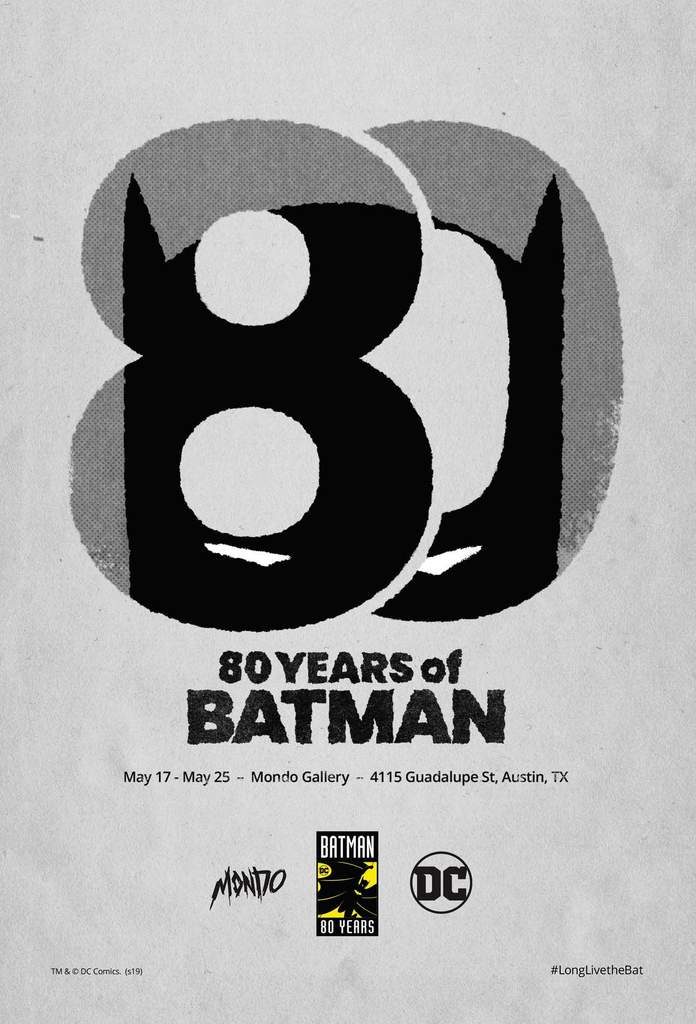 Attending the opening night, we arrived about 30 minutes before the gallery opened, finding a line already going down the block on Guadalupe!  As it got closer to the start time, an employee cosplaying in Catwoman’s modern look handed out a menu, letting you know what patrons would find inside. The menu featured a small image, dimensions, number of pieces, and price.

Once finally admitted, visitors are greeted right away by the first two pieces-Frank Miller’s cover to The Dark Knight Returns and David Finch’s Batman (2016-) #24. Furthermore, Batman music played over the loudspeakers to add ambiance. Much like the art itself, he music spanned across eras, playing the Batman ‘66 theme right after the score from The Dark Knight Trilogy.

For those who have yet to visit Mondo’s gallery space, it is a small area, allowing a show to feel more intimate, with a selection of past vinyl soundtracks always for sale in the back. As you make your way through, eras are blended together, allowing a classic like Jerry Robinson’s Detective Comics #69 to be displayed right next to Darwyn Cooke’s New 52 era variant to Batman #37.

In addition to featuring standard and variant covers, prestige format and graphic novels were also included, like Gotham by Gaslight and Batman: The Long Halloween. Some of the art kept the trade dress in its entirety, some just the logo, and others had a special Comics Code inspired Mondo logo.

I don’t envy whoever curated this collection. For me, trying to pick even the top 30 most iconic Batman covers would be an impossible task. If not iconic or representing an important milestone, so many are visually striking, making any kind of list difficult to narrow down. Still, the good folks at Mondo were up to the task, representing each Bat decade if you count the fact that the cover for the Arkham Asylum: A Serious House on Serious Earth graphic novel was from the printing released in 2004.

Once you’re done appreciating the art, patrons are free to head to the back, where behind the table displaying the vinyl soundtracks for Batman and Batman Returns, you can let the cashier — dressed as Joaquin Phoenix’s Joker — ring you up for the screen-printed poster you desire. As each cover was produced in a limited amount, with a print run ranging from 175 to 275 depending on the image, these tend to go fast. However, if you can’t make it down to the “Live Music Capital of The World,” Mondo is pretty good at announcing on Twitter when the gallery leftovers are available for sale online.

Mondo once again created an enticing gallery that any Bat-Fan would love!  Make sure you check out my images from the event above.

Overall, I was very happy with what selections they made and the reproductions looked fantastic framed and on display! I’d love to see one featuring their Bat-related movie posters someday! Here’s hoping they go for the hat-trick and do another one next year! – Javier Trujillo

OPINION: What to Expect From DC on Film Going Forward by...