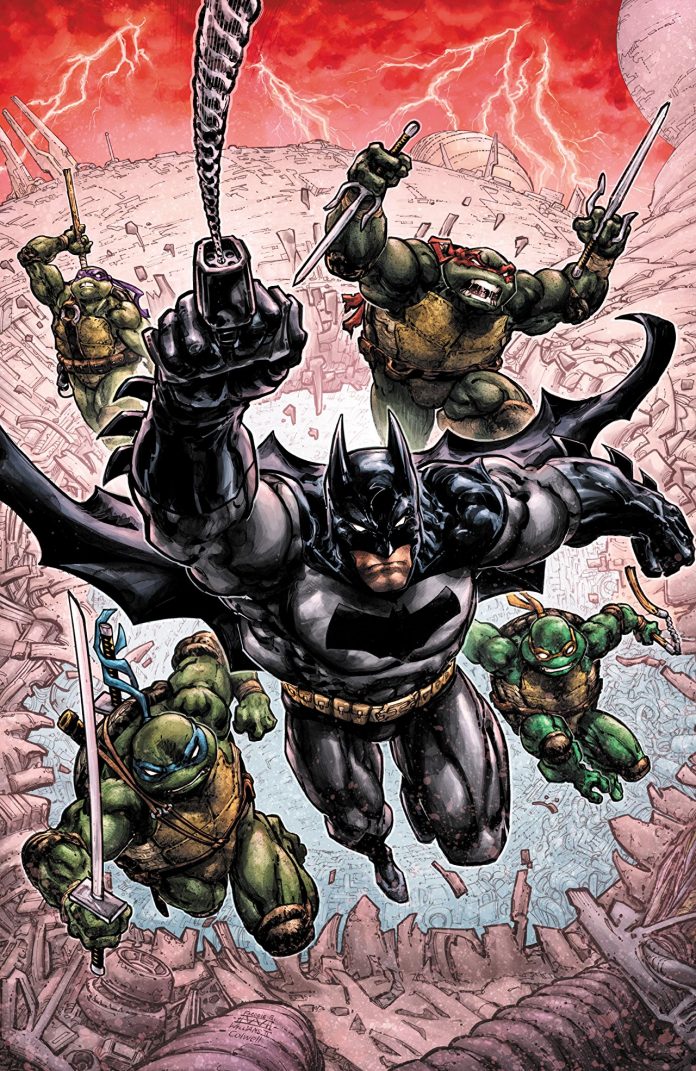 SYNOPSIS: The 80th anniversary of Batman collides with the 35th anniversary of the Teenage Mutant Ninja Turtles in this stunning concluding miniseries to the BATMAN/TEENAGE MUTANT NINJA TURTLES trilogy. Our heroes have battled the evil of the Foot Clan in Gotham City and Bane in New York, but now Krang has gotten his hands on the most dangerous technologies in the DC Universe-and no universe is safe from his wrath! Co-published with IDW.

The talented writer teams up with the incredible artist Freddie Williams II for the third time to kick off the latest crossover of Batman and the Teenage Mutant Ninja Turtles. The first series debuted in 2015 and brought the Turtle universe to Gotham City. Two years later, Batman and company were transported to New York City. This time, it’s all messed up.

Our opening pages take us to a city with a red sky, and a Dark Knight in a unique yet recognizable Batsuit. He mentions a dream about a kid with dark hair, then rushes to the Natural History Museum to confront the “Smile Clan”. There, we witness Clayface resembling Rocksteady, Killer Croc dressed like Bebop, a Karai-looking Harley Quinn, and the Joker…or rather, “The Laughing Man”.

Batman’s family then shows up: “Red Robin” (Donatello), “Nightwing” (Leonardo), “Robin” (Michelangelo) and “Red Hood” (Raphael). Despite their coming together, the Smile Clan get away, but not before Batman has a crazy vision, and sees “The Joker”. Back at the cave, he opens up to “Alfred” (Splinter) about what he saw and again mentions his dream of the kid with black hair. Just then, we get to page 19 that Tynion was talking about, and Turtle fans should lose their mind.

Oh, and for DC fans? Flip one more page…then it’ll all come together.

If you’re reading my review and haven’t read the issue yet, all of this will be a mess. Batman villains dressed like Turtle characters, Ninja Turtles dressed like Batfamily members, Splinter is Alfred, there is no Robin but yet Michelangelo is dressed like Robin but doesn’t exactly look like Robin. It’s a headscratcher…until you get to that last page.

I loved this issue. What a weird and fun direction to go. It’s fresh and doesn’t cover similar ground from the previous crossovers. The first was all about clashing the main characters. The second took us to a different setting and brought in more of the supporting cast. Here, it’s like everything was put in a blender and we’re taking a look at what poured out. I have no clue where we’re headed either, and that’s exciting.

If you enjoyed how these books have looked before, you won’t be disappointed here. Williams clearly has a love for both of these worlds, and was taken off the leash here. Since we’re not completely sure where we even are, he doesn’t have a strict guideline on matching previous work. Instead, we hop along from location to location, and everything looks pretty.

A trilogy is always hard to pull off, especially the last part. The pressure is high, and perfect conclusions never seem to please everybody. With this insane first issue, Tynion and Williams are off to a good start. There’s some fun action, great style, humor, and a lot of head scratching…but in a fun way. I wanted a comic book with flavor and Batman/Teenage Mutant Ninja Turtles III delivers. – Ryan Lower

Should JOKER Get a Sequel?

The “Badass” Comic Book Zoe Kravitz Read to Prep for THE...