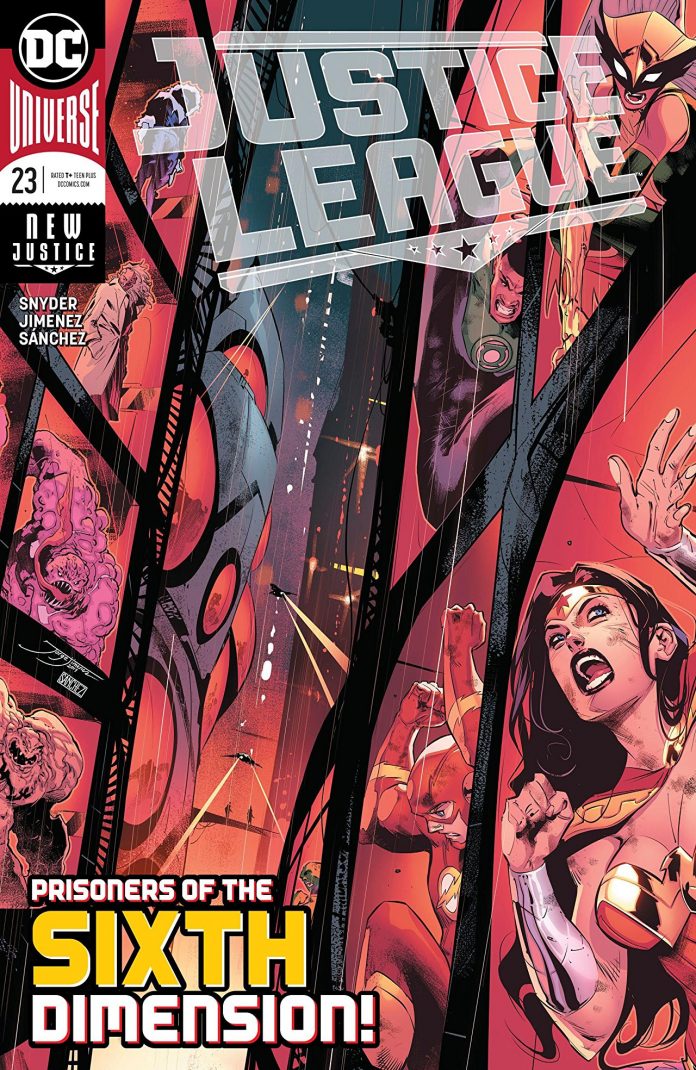 SYNOPSIS: “The Sixth Dimension” chapter four! Our heroes have been banished to the prison planet of villains by the World Forger. Stuck with no way of escape, the team hatches a plan to defeat the World Forger and get back to their dimension with the help of a new ally, but where is Superman?!

This issue was written by Scott Snyder and the art was by Jorge Jimenez.

Just kidding! (But that could be all I really needed to say!)

Justice League #23 brings the focus back onto the league itself following issue #22’s mother-load of backstory on Perpetua and the formation of the multiverse. In my last review, I said I would need to see where the story went going forward in order to get a better perspective of the issue itself. It still has its flaws from a pacing standpoint and the execution of a storyline spanning billions of years, but its place in the run is much clearer now. Sometimes the mechanisms of getting there aren’t perfect but simply need to do their job.

JL #23 opens with a heartwarming scene focused on a father/son moment between Clark and Jon. It is the memory of this “perfect day” that Superman uses to fuel his final effort to escape the prison galaxy created to trap him in darkness with limited powers provided by a distant sun. His efforts will leave him stranded and for dead in the bleakness of space if he fails, but Superman is bound by duty and love to make the effort.

Meanwhile, the rest of the Justice League (minus Batman, but we’ll get to that) is on the prison world of future Apokolips, now home to the villains that the future league has incarcerated from their near-perfect existence they’ve created. Their powers are withheld by restraining shackles and held captive by Lois Lane (?!), Lieutenant Jimmy Olsen (?!?!), and team. More surprising than their captor’s identity is the fact that Lois is fully aware that the Clark from their future is not the real Superman but the World Forger. Why would Lois take sides with an imposter in a totalitarian future built on highly questionable morality? I’ll go ahead an employ an adage from the north woods of Minnesota and just say ‘never get between a mama bear and her cub.’

While the team attempts an escape aided by Martian Manhunter and Hawkgirl’s future son Shayne (along with a surprise assist from another future version of an infamous team,) Batman has remained behind in New Gotham to continue his conversation with the World Forger regarding his potential role in creating an idyllic future by preemptively eliminating villains and dissenters to do so. Snyder does a nice job pulling together the threads that were presented over the past two issues involving the battle between Mr. Myxzplk and Bat-Mite. Myx is undoing the very fabric of reality and when he does the World Forger will take action to supplant the DC Prime reality with the new one of Future 6th dimension. He just needs Batman’s help to convince the league to go ahead with the plan and to eliminate Superman as a threat to disrupt the plan to preemptively punish villains instead of seeking justice. Batman’s choice is sure to surprise readers as well as drive the next chapter in this story forward.

Snyder is clearly enjoying his work here and the story flies by in a way that made me double check the page count. Sure, there are about three too many newspaper related puns between Lois and Jimmy, Batman’s moral integrity feels mischaracterized (though I think we’ve all learned to suspect that Batman is one step ahead of the villain and us as readers,) and the Deus ex Machina of the future Legion of Doom is both a bit too convenient and too problematic, but this is a great read. Snyder tells just enough when required (the recap of each league member’s core role on the team) and allows time for the story to breath and show the reader what they are meant to understand (Clark’s motivation comes from love instead of fear in the opening scene.) There is a lot going on in each chapter of “Escape from the 6th Dimension” but Snyder is executing at a high level.

I’m not sure what else I could tell you about Jimenez’s art that I haven’t before. It all still applies. He’s a master at work and his ability to highlight emotional moments, character expressions, and scenery implications are marvelous. Your eyes will be happy.

Overall this is a very solid entry that stands among the best in this volume of Justice League. It may be just a half step behind the previous issues these powerhouse creatives have worked on together, but not by much. Justice League #23 is a must read. Go get it. – Garret Grev

The End of the Year/Holiday 2018 BOF Mailbag!