SYNOPSIS: It’s a battle to the death as Batman goes head-to-head with the Grim Knight! The Caped Crusader is forced to not only fight off the most evil version of himself, but the growing desire to turn his back on his moral code and commit cold-blooded murder. Any other time, Batman would be able to stay on the straight and narrow, but as the Joker serum finally takes over his body, Bruce Wayne may just succumb to pure evil, and kill the Grim Knight. All of this is foreseen by the Batman Who Laughs, who has been planning for the corruption of Bruce Wayne, banking on him activating the “Last Laugh” protocol and turning Gotham City into an incubator for evil. All the Batman Who Laughs needs is one last “Happy Bruce” from another dimension to make his serum work…but only Batman knows where the last Bruce is going to show up. 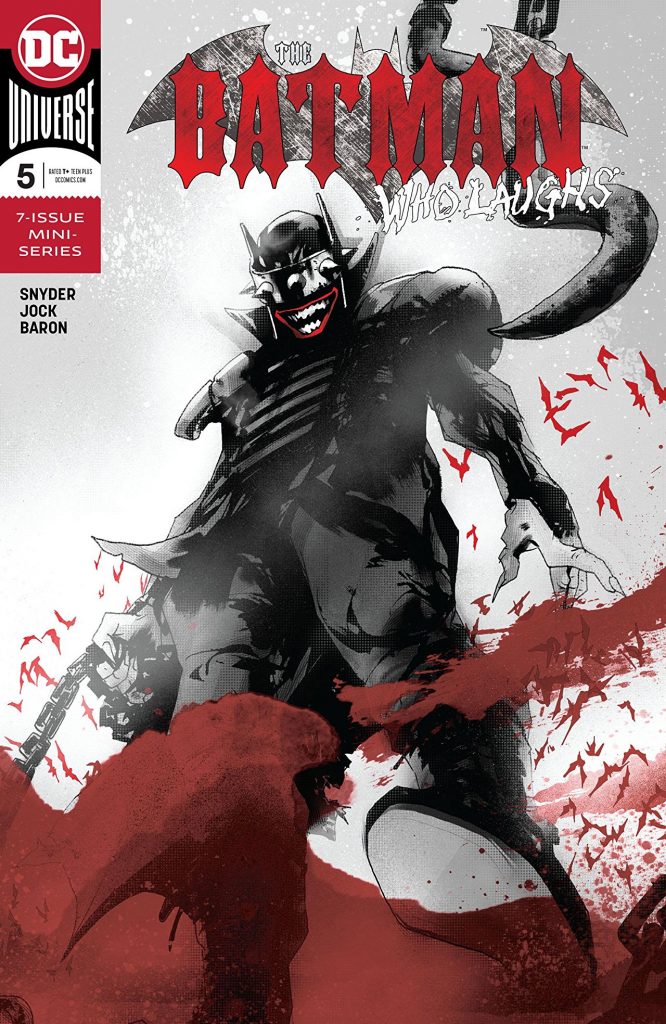 I give up on the synopsis.

We have yet to see Batman actually square off with the Grim Knight, and that certainly doesn’t happen this issue. That said, it doesn’t matter because this issue is NUTS, and so much fun!

I have done a disservice to Jock, the artist who has brought Scott Snyder’s vision to life in this miniseries, by not previously mentioning how gorgeous his art is in these issues. Well, gorgeous and chilling at the same time, but given the subject matter, I’d say he’s doing his job. His use of red when seeing through Batman’s “new eyes” is particularly awesome. His depiction of the characters, in general, is reminiscent of Frank Miller’s style, at least to me, and we get an awesome nod to Miller when the Batman Who Laughs strikes a very Dark Knight Returns-esque pose right before virtually slaughtering the Court of Owls.

I also can’t say enough for Snyder’s writing. Each issue opens with a piece of Gotham or Bruce’s history that beautifully tie into that issue’s arc. The Batman Who Laughs #5 opens with Bruce analogizing Gotham to the public transit system set up to help the citizens protect and look out for one another. It was a beautiful one-pager that made me completely forget that we left Batman at the mercy of the disguised Batman Who Laughs being pelted by SWAT machine gun fire due to a case of mistaken identity. To escape his predicament, we see Bruce embrace his new persona in a somewhat chilling manner that can only be described as….well… pretty damn kick ass. It’s always fun to see our heroes toe the line without crossing it, at least for a time.

Speaking of badass scenes, we see The Batman Who Laughs take on and destroy the entire Court of Owls in a matter of minutes. While the manner in which he does so was fun to witness, I can’t help but think how our Batman struggled with them. It’s both cool and terrifying that the Batman Who Laughs could dispatch with such a threat with little to no effort. We even catch a glimpse of another Bruce Wayne who took over the Court in another universe so that he could use their resources to “save” Gotham.

The Grim Knight (who still has barely engaged Batman) seems fixated on Gordon, going as far as corrupting James Jr’s from other dimensions into becoming the twisted Robins that the Batman Who Laughs constantly employs to torture the Commissioner. I will be very interested to see how that dynamic plays out in the last two issues. Maybe Gordon will get to take a Batman down after all?

The Batman Who Laughs’ endgame is to push Bruce to willingly activate the Last Laugh protocol, which Bruce initially designed to immediately quarantine the city from an infection, or from a tainted water source, etc. The Batman Who Laughs believes he can make Bruce turn the people of Gotham into dark versions of themselves by using the Last Laugh as a delivery system for dark matter, and that the now-Jokerized Bruce will gladly push the button. Based on Batman’s actions at the end of the issue, he just might take the bait. But I’m still betting he has a trump card up his sleep. Or will this be the one time that Batman’s contingencies for his contingencies can’t save him?

It’s hard to put in words how exciting and original this story is, and I’m just happy to be along for the ride (and honored to review the issue for BOF). We have two more issues, but something tells me The Batman Who Laughs may find himself as a permanent fixture in the rogue’s gallery. – Mance Fine