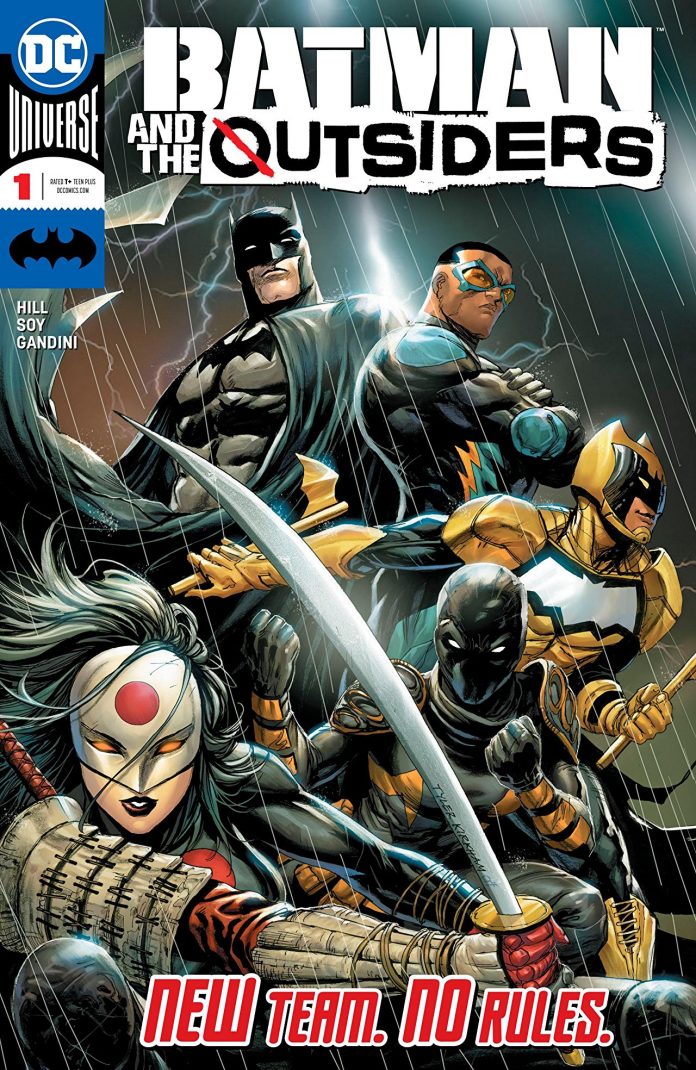 SYNOPSIS: When the quest for justice drives Batman into some morally ambiguous areas, he calls in the most moral man he knows: Jefferson Pierce, a.k.a. Black Lightning, and his team of operatives known as the Outsiders!

Several years ago Batman personally put the Barrera family into hiding after they suffered through terrible experiments at the hands of an organization called the Ark. Now all but one of them has turned up dead…and Batman needs to locate Sofia Barrera before the wrong people get their hands on her-and her surprising power! But it wouldn’t be Batman without a hidden agenda, would it? And when Black Lightning, Katana, the Signal and Orphan find out what Batman is really up to, their every loyalty will be called into question!

Following the events of Detective Comics: On the Outside, Batman put together a new team: The Outsiders.

The team consists of Batman’s protégés — Signal and Orphan — along with Katana, and Jefferson Pierce, aka Black Lightning, as the leader.

The new series picks up with the Outsiders together, but just barely.

The Signal doesn’t trust or respect Black Lightning, going as far as to say BL is not his father or Batman. Orphan seems to along for the ride but staying close to Signal.

These two characters, particularly Signal, and their relationship with Black Lightning has set the tone book. Both Signal and Orphan are young characters that have been under the Bats’ wing for most of their history, but neither has really found a place in this new landscape. Cass (Orphan) has been more prominent because she’s been around longer as Batgirl, but with that mantle unavailable she has been without a role. As for Signal, he’s a kid that Bruce takes in, but isn’t a Robin. He has the daytime crime fighting gimmick, but that hasn’t meant much so far.

Given a new mentor that doesn’t completely trust their old one, how will they handle it? Watching Signal struggle with that opens so many possibilities. This is one of the few times a young black superhero has the opportunity to be mentored by a veteran black superhero that has literally been around for years. Besides the story implications, it will be good for all of the people that look like them to see this relationship on the page.

The other question that drove the first issue: why did Batman start this team. He says it is because he is neglecting this crop of kids (the non-Robins), and there is truth in that. However, Jefferson believes there is more to this group, and he is clearly standing in for the reader in that regard. Batman has come off as completely altruistic in every exchange about the group, but that unknown feeling lingers through most of the issue. It jumps back to the forefront when Batman assigns the team a mission, even the group is struggling. It could be to force them together, it just doesn’t feel that way. It wouldn’t be Batman if he didn’t keep some soul-crushing secret from those close to him.

This is a solid first issue. I really relate to the developing relationship between Signal and Black Lightning and hope it is a focus for a while. That personal stake could have elevated my feeling on the book, but that’s the point of reading; having a personal response one way or the other. All that to say, Batman and the Outsiders is worth checking it out. It has all the makings of a fun team book. – E. Chad Metz