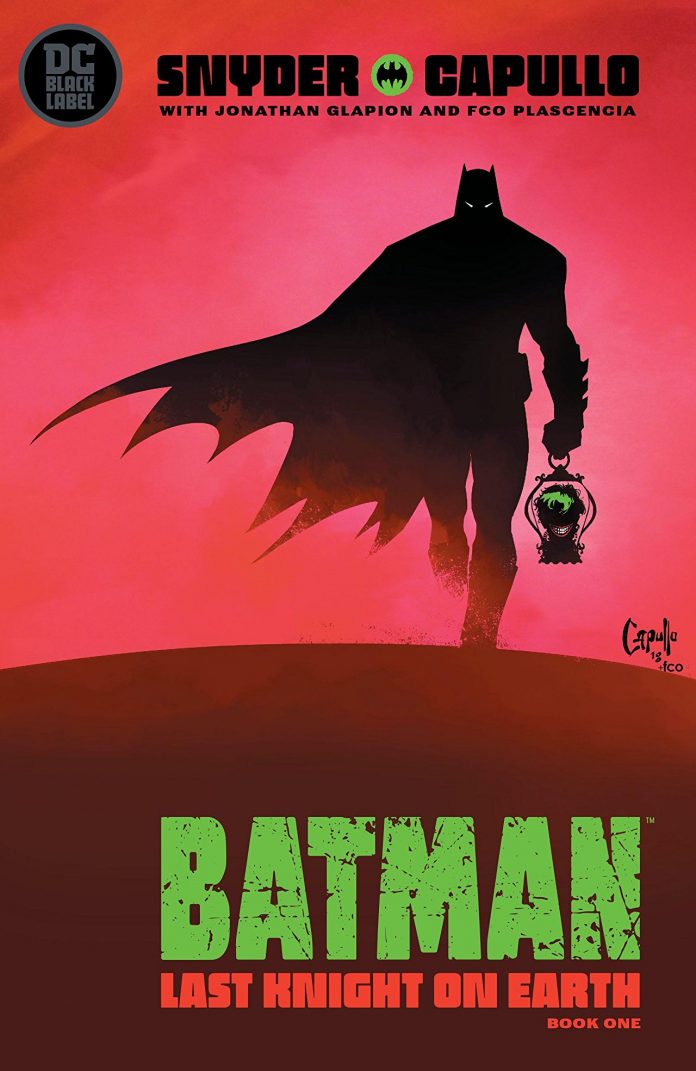 So begins this sprawling tale of the Dark Knight as he embarks on a quest through a devastated DC landscape featuring a massive cast of familiar faces from the DC Universe. As he tries to piece together the mystery of his past, he must unravel the cause of this terrible future and track down the unspeakable force that destroyed the world as he knew it…

From the powerhouse creative team of writer Scott Snyder and artist Greg Capullo, the team that reinvented Batman from the emotional depths of “Court of Owls” to the bombastic power of DARK NIGHTS: METAL, DC Black Label is proud to present the bimonthly, three-issue miniseries BATMAN: LAST KNIGHT ON EARTH.

This could be the last Batman story ever told…

Scott Snyder and Greg Capullo are “BACK IN BLACK”………label.

The next chapter in DC’s mature label comes from a brilliant team that fans came to adore with their legendary “New 52” Batman run. And under this label, they can bring back as much or as little as they want from previous work, which is a major plus for this book.
A brief summary of book one, which is split into four parts. Batman is investigating an odd case; no villain, just pieces of chalk. However, when it comes together it’s an outline of the Batman, and his heart is right where the Waynes were murdered all those years ago. Upon his arrival to where the Batman was born, something strange happens. The story really takes off from there, bringing us inside a mind trip at Arkham Asylum (I got a 12 Monkeys vibe), then above ground in a desert (a Mad Max vibe), then back underground (I don’t know vibe) before ending up on the image that we see on the cover: Batman walking with The Joker’s head in a jar.

In case, for some reason, you’re reading this before reading the issue, I’ll refrain from most spoilers. But what a trip this story is…and I loved it. Snyder is always great at bringing different genres to the table: drama, comedy, action, thriller and especially horror. He hits every note here with ease. The story movies at a quick pace too, always keeping us guessing but never frustrated. I especially enjoyed the mystery inside of Arkham. I’ve loved everything he’s ever done with the Joker, but man does he knock it out of the park here. He was damn funny, and I kept rereading it.

As far as it connecting to their previous Batman work: that’s up to you. This can totally play into a “post-New 52” story, or as a standalone Batman tale. It doesn’t beat you over the head to lean any particular way. However, Snyder’s story a few years back with Sean Murphy about a generational Batman machine is connecting tissue, so maybe track that down if you haven’t read it yet (Detective Comics #27 from 2014).

Let’s talk about the other half of this team. Were there any doubts about what Greg Capullo would bring to the table? Every page makes me want to blast some metal and punch something. B:LKOE looks fantastic. Capullo was let off the leash, and beautifully guides us through this insane adventure, and with ease. The opening pages reminded me of some of the horrors he’s provided us before in his Batman run, and the brighter stuff was a great change of scenery. I shouldn’t be surprised, but yet was floored….the signs of an all-time great artist.

Have I sold you enough on this book? It’s crazy, unpredictable and fun. If I have one “negative”, it’s that anything “Omega” isn’t my cup of tea. That’s all I’ll say, and it’s a me thing. However, I’m totally invested in this story and can’t wait for book two. – Ryan Lower