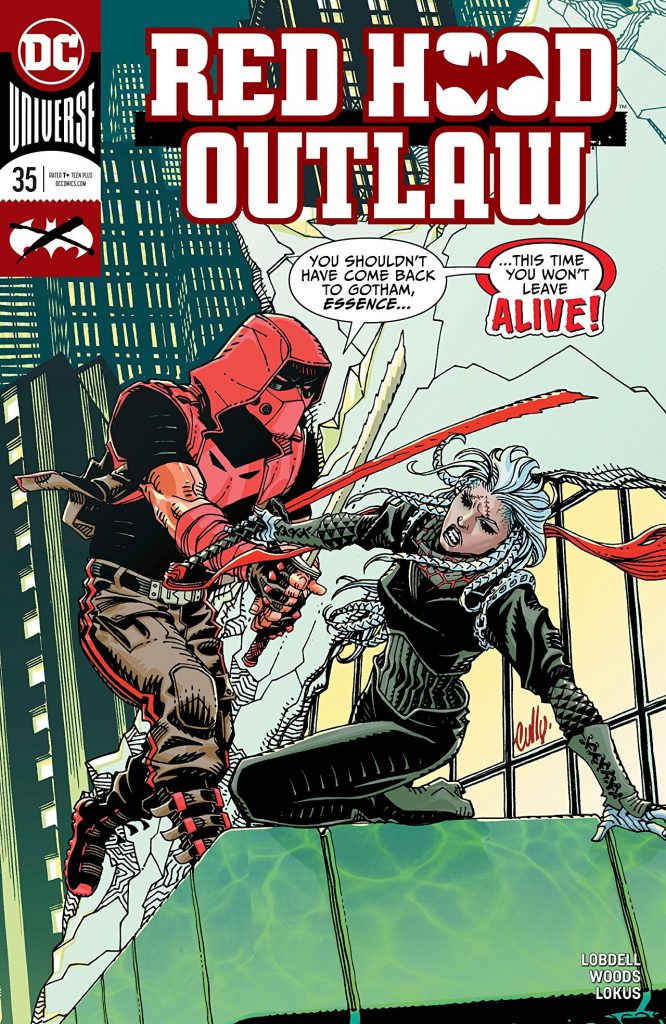 SYNOPSIS: Last time he was in Gotham City, Jason Todd pretended to be a master criminal in the underworld. This time it’s for real! With Suzie Su scared of what her new boss at the Iceberg Lounge might be capable of and Bunker questioning his own loyalty to Jason, the Red Hood’s house of cards could be headed for a collapse. And if that isn’t bad enough, Jason comes face to face with the teacher who taught him everything he knows about death and life, and Ducra isn’t at all happy about this latest twist in Jason’s story…

My connection with Jason Todd is a convoluted one, much like his history. As a kid, I would occasionally get a modern Batman comic, so I had a passing familiarity with Jason and knew he was from the circus, too, just like his predecessor. My dad would usually buy me an older one from the used bookstore, primarily a beat up Silver Age issue or reprint, so I kind of missed out on the post Crisis reboot, though I was aware of it. By the time I started seriously collecting Batman in 1989, Jason was already dead, with A Death in The Family being the second trade paperback I got (Batman: Year One was the first). His story was over, or so we thought.

Flash forward to late 2004 and Jason has been resurrected, returning in the story Batman: Under The Hood. I had no problem with Jason’s resurrection and enjoyed his various appearances, whether he was on Batman’s side, or not. When he finally got his own title in The New 52, I thought, “Good for him.”, but didn’t read it.

When I got the assignment to be Batman On Film’s reviewer for the now-retitled Red Hood: Outlaw, I used my DC Universe subscription (and library card) to do a deep dive on the Rebirth era Red Hood & The Outlaws. I am so glad I did! I fell in love with the dynamic and characterizations of the “Dark Trinity.” Lobdell, who can be hit or miss for me, has really been building up the character of Jason Todd and has made me into a Todd fan over the course of those initial 25 issues.

So, here we are at issue #35! Red Hood is without his Outlaws and in charge of the Iceberg Lounge, sporting a new costume, but keeping the same dangerous attitude. There’s a lot of change I missed out on in the past 10 issues! Without Artemis and Bizarro, Jason feels colder, crueler. I’m not terribly fond of the new look, either. While I like the Arkham Knight inspired hoodie, I don’t care for the vest in lieu of a jacket. While I understand why he’s not adorned with a bat, having an image of a red hood directly underneath the actual red hood he’s wearing seems silly. I guess we’re stuck with it though.

This issue is part four of “Prince of Gotham” and Lobdell certainly led off with creating that feeling for Jason. Woods assists with some fantastic art as Jason peers out over the sprawling kingdom of Gotham City. While I’m not familiar with Isabel, Suzie Su, and whoever is the new Wingman, Lobdell gave me enough in the story to at least have an idea what their respective relationship dynamics are with Jason. Guess I’m gonna have to go back further and read some New 52 Red Hood & The Outlaws!

As Jason interacts with various people, we are treated to flashbacks in Jason’s mind which serve as an excellent reminder for newer readers who may not be as familiar with Jason’s past. What I particularly appreciated was how Rex Lokus washes out all the colors in these particular panels, save the color red. It creates a thread across the narrative of his life, foreshadowing his future not only as Robin but the Red Hood as well.

Jason has a reflective moment on the yacht as it heads towards the Iceberg Lounge where he reminisces about Artemis and Bizarro, followed by thoughts about Roy and Kori that added to the feeling of isolation I mentioned earlier. Seeing his affection for his former partners added a layer of sadness to everything as he was confronted by Essence, someone with whom he also shares a past with.

Essence and Red Hood do battle in some metaphysical realm that allows Red Hood to ditch his crowbar for weapons known as “The All-Blades.” Just the fact that Jason has a crowbar, a weapon that was used in his murder, is a great clue to his headspace right now without his Outlaws. As his battle with Essence rages on, you get to see the tactical ruthlessness that he no doubt learned from his time with Bruce. Jason means business, whatever his goal is, and the ends seemingly justify the means.

Given where I last left off on Jason’s adventures, I wasn’t surprised by who shows up in this issue’s final page! It instantly made me yearn for what happens next and isn’t that what a good comic should do?

I was a big fan of Dexter Soy’s work on the initial entries into this series and I am sad he’s no longer on the title, but Pete Woods does an excellent job picking up where he left off! I remember him from back when he was paired with Busiek and Johns on their Superman story, “Up, Up, and Away!” and I’m happy to see his work grace these pages. He often tells the story in a widescreen type of panel but knows when to shift into a splash page to make the impact count.

Despite not being 100% up to date on this title, Lobdell crafted a tale that had me invested in this new status quo. My heart goes out to Jason and all he’s lost, which is something I wasn’t expecting when I took on this book. The former homeless street kid has certainly moved up the Gotham social ladder, but for how long can he keep it going before his anger gets the best of him? I’m certainly on board to find out! – Javier Trujillo

Michael Keaton Describes the 1st Shot of Him as Batman in...