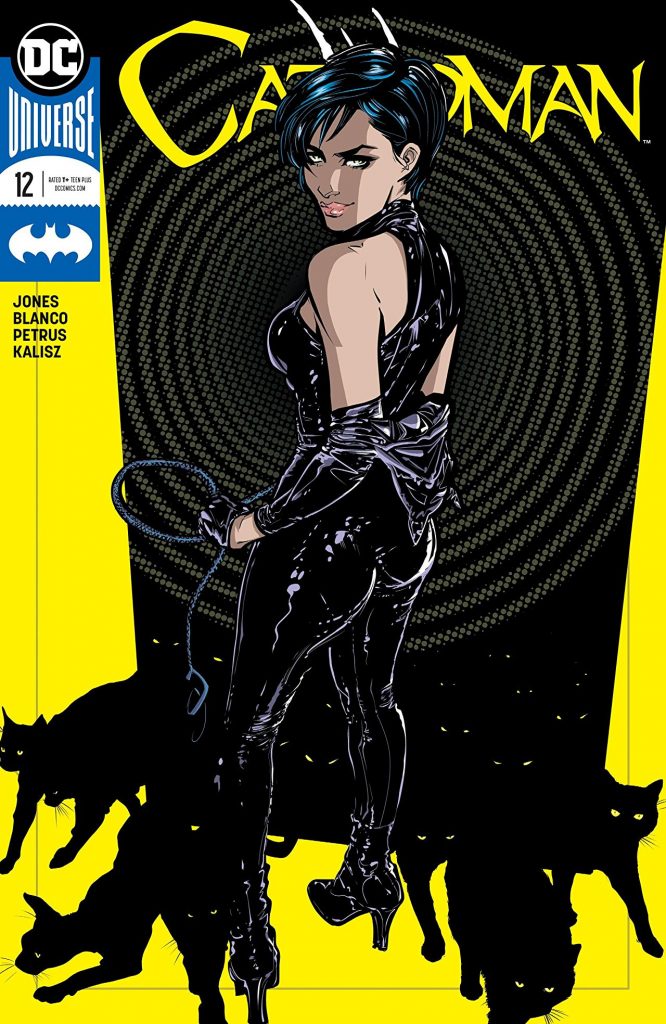 SYNOPSIS: Chaos reigns in Villa Hermosa as all the bad guys in town rush to fill the void left by the Creel family’s ouster. But as Raina Creel’s dark plot to resurrect her son comes to a gruesome crescendo, Catwoman may finally be able to put her foe down once and for all. That is, if she can reconcile her own past and find her footing again.

When I was in college, my Literature professor told us about a tactic writers use called in medias res.  It’s a Latin term that literally translates as “into the middle of things.”  You’ve all seen it – in a book, a movie, a TV show, a comic – the story opens and you’re dropped into the middle of the action, unaware of anything else that may be going on.  The example of in medias res my Lit professor often gave was “Two shots rang out; a body hit the floor.”  This is a great opening to a story – it immediately pulls you in and you are completely engaged in what is unfolding before you, but you also have no idea about any other story elements that may be in the works.  It is up to the author to pull all those pieces together and show you the full picture slowly and purposefully, hopefully to great effect.

Joëlle Jones has used in medias res since the beginning of this story arc in Catwoman, and she continues to use it effectively throughout Issue #12.  It’s a clever way to construct the story she’s telling.  The reason why things are happening and the reason why characters are making the decisions they are making have been cunningly hidden until this issue, and now Jones is letting us peek behind the curtain to see all the moving parts.  A few of the pages are text-heavy due to Jones’ crafty maneuver, but the story itself doesn’t suffer much.  If you’ve been following along for the last several issues, you’ll have plenty of “ah-ha” moments in the latter pages.  And the last page leaves us on a bit of a cliffhanger, so it’ll be interesting to see where things go from here.  Bring on Issue #13!

Artwork this month is shared by Fernando Blanco and Hugo Petrus, and the book looks fantastic; Catwoman remains a treat to the eyes.  They share a great sense of perspective, and the car chase sequence throughout the book is kinetic and cinematic.  I did a bit of research and it looks like Joëlle Jones might be back on art duty in the next issue.  If that’s true, we’re all in for a serious treat – her covers are phenomenal, but let’s face it: we’re all waiting for a book full of her impeccable artistry.  Oh, and be sure to check out Artgerm’s variant cover for a vintage take on our favorite feline antihero.  I’ve really been digging his variants.

One of the reasons why I always look forward to with Joëlle’s Catwoman each month is that she keeps it energetic and fun.  Jones’ Selina Kyle reminds me of a Bond girl and James Bond squished into one awesome package; and with the plot of purloined ancient artifacts, we get a dash of Indiana Jones as well.  You can feel confident in keeping this title in your pull list. – John Funderburg