BATMAN AND THE OUTSIDERS #2 Review by E. Chad Metz 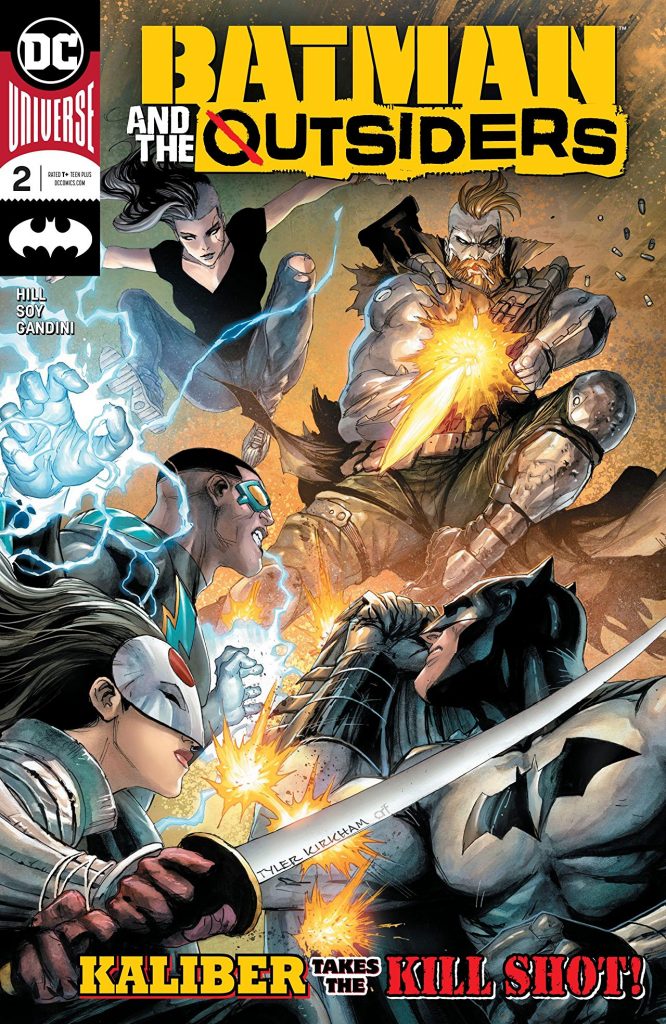 SYNOPSIS: Sofia Barrera is on the run from an enforcer for the Ark, the program that gave her powers—but in the process, she’s fallen into the hands of the mystery man called Kaliber! He claims he wants to protect her…but who’s paying his bill? And is Katana already questioning Black Lightning’s leadership on their very first mission? Or is she just pushing him in a direction he’s not willing to go?

Batman sends the Outsiders protect and rescue mission, for the newly orphaned (and superpowered) Sofia Ramos. But that all depends on Kaliber, another Batman associate, holding off super-assassin, Ishmael, from accomplishing his mission from his teacher, Ra’s al Ghul.

This month’s issue is light on the actual Outsiders and focuses on Sofia and Kaliber as they await the team’s arrival. Kaliber came on the scene doing his best Terminator impression, but he reveals that was merely a ploy to get Sofia to come along with him.

After his kinetic proclamation last issue, his true origin here slows the story, enough for the readers, and Sofia, can process the information that follows. It is easy for comics to drop exposition in the middle of an action piece, it doesn’t feel like the story is stopping if the characters are literally still moving, but moments like this are needed. The story of deadly ninja assassins and secret superhuman experiments feel weighted when Sofia hears them alone and decides this all may be too much for her and tries to end her own misery.

The action picks up when Ishmael interrupts her. What follows is Kaliber in a knockdown brawl with Ishmael until the Outsiders show up. Writer, Bryan Hill has said he wanted Batman and the Outsiders to be his most kinetic book, and to channel his manga influences. That shows up in this half of the story. Even in a visual medium like comics, the action is purposely big and frenetic. Lots of big panels, with motion lines and characters in constant movement. I am not familiar with manga, but the action here does feel like an anime, with a western influence. Ishmael defeats everyone and delivers Sofia to Ra’s al Ghul.

Outside of the action at the end, there isn’t a lot of the actual Outsiders in this issue. This issue felt more like a declaration of what to expect from this run. Hill goes from an intimate character moment and exposition to 100 mph action and makes it flow for an enjoyable experience. It makes me think of watching a certain anime (magic dragon orbs) with heavy dialogue openings, and a flurry of action at the end, except this feels more satisfying.

I hope there is more of the team and their growing dynamics next issue, but the ride is making the wait worth it.

Oh, Batman is only in this book for two pages. Black Lightning calls him out for his evasive way of conveying information. His relationship with Bruce, particularly the way he doesn’t let the mystique of the Bat affect him, is one of the things I look forward to in this series. That dynamic will help Black Lightning feel like the leader that Batman believes him to be. – E. Chad Metz

These Are a Few of My Favorite (Batman) Things