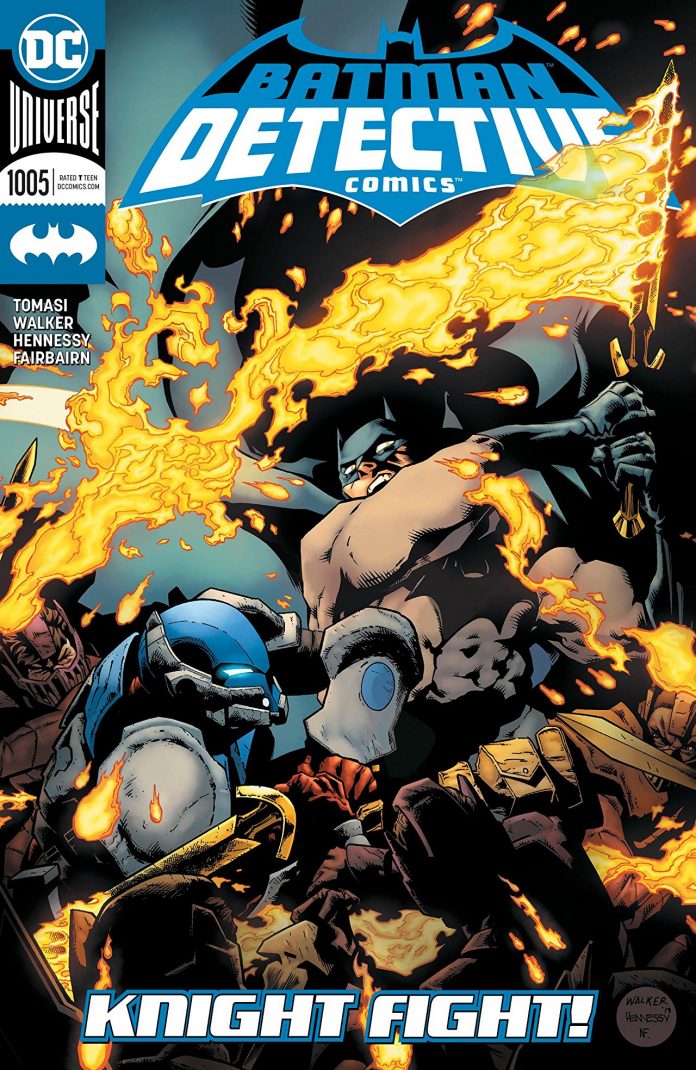 SYNOPSIS: The finale of the Arkham Knight saga arrives as the Knight’s surprising cult within Arkham Asylum unleashes its full power! Will Batman be swept under by the madness? Who is the Knight, to have inspired so much loyalty? And is there any way of stopping them that won’t just cause their legend to grow?

Here we are the dramatic conclusion between Batman and the new Arkham Knight.

“Conclusion” is a term I use loosely this week. While the battle between the Dark Knight and his new foe is over it seems that the war has just begun.  This is a book where you get more out of the characters than the story, thus Batman saves his own book. All the while Brad Walker provides the reader with some stunning splash page artwork!

Tomasi is at his best this issue when sticking to the dynamic duo as Batman not only saves Gotham City but us the reader from sheer boredom.  Batman, Robin, and Alfred are hands down the best part of this issue and I’d even say the arc itself.  While I honestly could not care less about the outcome of this story, the Arkham Knight, her hatred of Batman and her master plan. I fell completely on the opposite side of the spectrum with Team Batman.  I ate it up and I want more of it. The strategy, preparedness, the banter between the three, pure perfection.  This is what Batfans love, seeing Batman and Robin in the field counterattacking and communicating.  Providing the reader with a wonderful experience.

While I did enjoy the introduction to Tomasi’s new Arkham Knight it was short lived.  Rather quickly the character felt like I’ve seen her before.  Family issues, manipulated by the Joker and even her own father. Astrid Arkham just falls flat.  Where Tomasi strikes gold is writing the Bat-family. He strikes out swinging on the Arkham Knight if you are a  baseball fan, Tomasi has the platinum sombrero. The character is a missed opportunity that isn’t going anywhere. She actually appears to be a bigger part of the overall story than I could have imagined.  I’m willing to bet I will feel similar to the Arkham Knight as I did about the Colony during James Tynion’s Detective run.

What else did you expect from Brad Walker?  He has been the constant on this arc. Every issue stealing the spotlight from a legendary writer.   Walker provides some really stunning horizontal artwork. Splash pages that will have you gazing at all the wonderful details. Seeing Batman and Robin fighting the Arkham Knight’s band of merry men is on par with the great action panels we have already gotten in this story. I’ve really enjoyed Walker’s Dr. Phosphorous in the previous issues and seeing him square up vs the Batman was another great moment. Here’s hoping Walker stays on next arc I’ve grown to really appreciate his style.

While this isn’t the best Batman story you will read. It does have some great character moments.  Tomasi really knows how to write Batman so well.  This problem seems to be the villains.  While I can’t blame a creative for wanting to branch out and/or try to leave their imprint on something. I can’t help but wonder.  If Tomasi went a bit more traditional and can match the quality of writing he provides for the hero are we missing out on something that could truly be very special. – Peter Verra