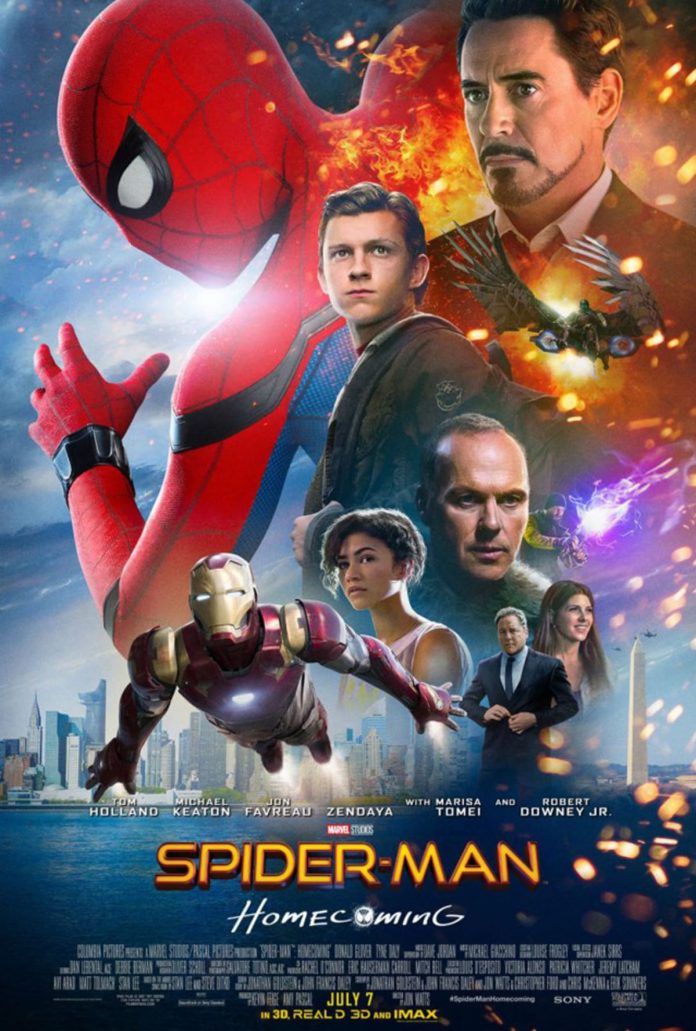 SYNOPSIS: Thrilled by his experience with the Avengers, young Peter Parker returns home to live with his Aunt May. Under the watchful eye of mentor Tony Stark, Parker starts to embrace his newfound identity as Spider-Man. He also tries to return to his normal daily routine — distracted by thoughts of proving himself to be more than just a friendly neighborhood superhero. Peter must soon put his powers to the test when the evil Vulture emerges to threaten everything that he holds dear.

Tom Holland is the best cinematic Spider-Man, ever.

Michael Keaton is the best cinematic Spider-Man villain, ever.

And, you guessed it, SPIDER-MAN: HOMECOMING is the BEST Spider-Man movie, EVER!

I always found Sam Raimi’s origin film SPIDER-MAN to be highly overrated and his 3rd film (SPIDER-MAN 3) was a total convoluted mess. THE AMAZING SPIDER-MAN films with Andrew Garfield are forgettable and inconsequential. However, Raimi’s SPIDER-MAN 2 is an absolute masterpiece. Toby McGuire hits all the right notes as a young Peter Parker trying to lead a somewhat normal life AND be the web-slinging hero at the same time. Alfred Molina’s Doc Ock was a perfectly humanized villain.

Out of the 5 previous Spider-Man films, only 1 was great…hell, even GOOD. I just assumed the franchise was dead in the water. Until now.

Holland’s Peter Parker is a true teenager struggling with his alter ego, Spider-Man. We see a young man just trying to be…well……a young man, all the while very dedicated to being a hero. And, to his hopes, a soon to be an official member of the Avengers.

Based on many trailers and posters, I was concerned that the Marvel Cinematic Universe that surrounds this Spider-Man would be shoved down our throats. I even went as far as to say to a friend a few weeks ago, “I just hope this is a Spider-Man film and not IRON MAN 4 with Spidey cameos.”

Well, have no worries, my friends! Downey’s Tony Stark is perfectly used and completely necessary to fulfill the film’s overriding narrative: Parker is a fatherless kid with these incredible powers, but with very little adult guidance to help him understand how to live the life that was bestowed on him.

Aunt May (played by the perpetually alluring Marisa Tomei) is alive and well in Peter’s life, but she seems to be struggling with her own issues a bit and does not really come across as someone guiding Peter in any way. Fortunately, she is given very nice a moment in the end; as if to redeem what was almost a wasted character.

But it is Stark that gives Peter his guidance. He is a father figure, a mentor and – much to Peter’s dismay – a BOSS.

I love their dynamic – some of my favorite scenes in the movie revolve around their relationship.

In fact, the entire cast shines. Peter’s best friend Ned (Jacob Batalon) is the high school chum who knows a little too much about Peter Parker (that fact sets up some of the funniest moments in the movie). Laura Harrier as Liz, Peter’s high school crush, is charming, sweet and absolutely adorable. Even Donald Glover steals the show in the few scenes he is in.

But no comic book film can work without a compelling villain, and it is Batman himself, Michael Keaton, which graces us with a Spider-Man villain that even surpasses Molina’s Doc Ock.

Like Molina’s performance before him, Keaton gives us a villain (The Vulture) that isn’t simply black and white in his actions. He has a true purpose – one that could even be commended – until you realize how twisted and backward his logic truly is.

I will not give away any plot points, but just know there is one scene in particular (that lead to a series of scenes) that is absolutely riveting and even uncomfortable to watch. And it is ALL because of Keaton’s beautifully nuanced performance.

Keep your eyes open for a few fun Easter eggs and stay for the entire credits, as well. You will thank me for it.

In the end, Marvel Studios (and Sony) finally got Spider-Man absolutely right.

And, it took a beloved Bruce Wayne/Batman actor to give us a perfectly cast and portrayed comic book bad guy…

“You either die a HERO, or you live long enough to see yourself become the VILLAIN.”