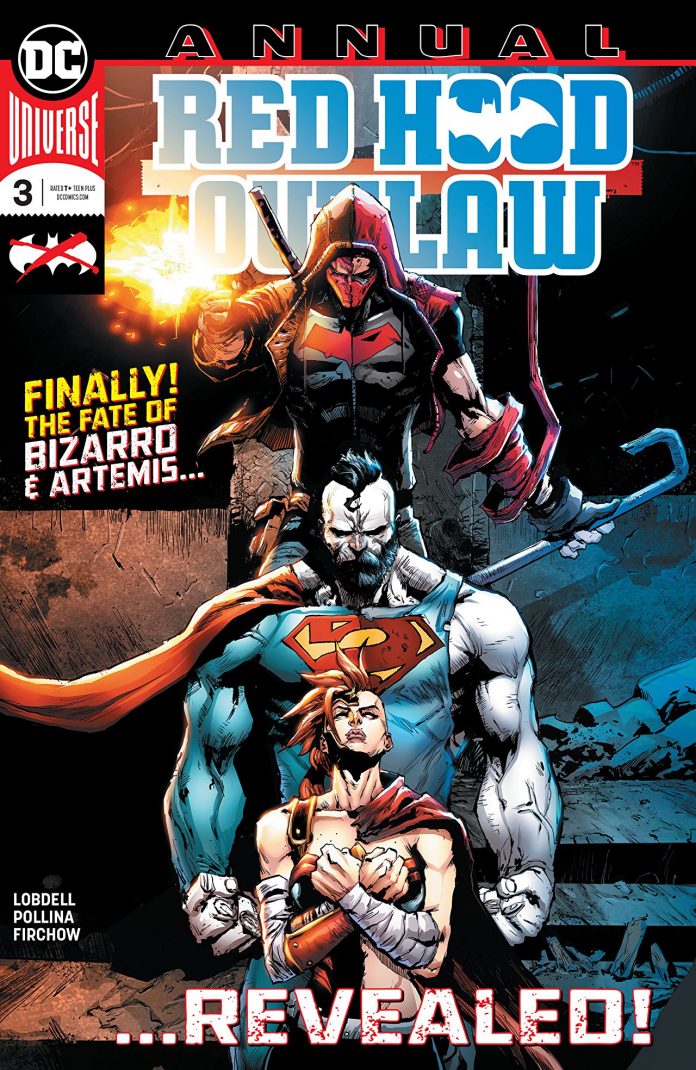 SYNOPSIS: Missing since the fateful events of issue #25, the story of what happened to Bizarro and Artemis after they were sucked through the quantum doorway can finally be told! Trapped in a strange reality where everyone with metahuman abilities has become normal and ordinary humans now possess powers, up is down, left is right and only a pair of Outlaws can save the day in a world gone mad. Meet strange new foes, and even stranger new allies. Can the Outlaws fix this broken world and still make it back to our world and their mission alongside the Red Hood?

Red Hood: Outlaw reverts back to its original title, at least for this annual, as we finally see what the other two members of the “Dark Trinity” have been up to for the last eleven issues. Kicking the issue off with Red Hood, we see that his lost partners are still very much on his mind as Jason asks a young meta, Vessel, who can “sync with the dead to use their super-powers” if he can locate Artemis and Bizarro. He cannot, much to the relief of Jason.

Pete Woods handles the opening prologue’s art AND colors, providing one of the most serene locations ever seen in this title. The Red Hood seems out of place in the opening splash page, his ominous presence clashing with such a beautiful sky. I like the choice to not only have Woods contribute some art but have Dexter Soy provide the cover, combining both of the series’ primary artists in one package.

However, for the rest of this tale, we leave the familiar behind as Adam Pollina takes over art duties as the story jumps back to six months earlier, with Bizarro and Artemis landing on another Earth. Pollina showcases a world both familiar and frightening, with a two-page spread featuring a skewered Hall of Justice. Think a fiery Richard Donner-style Fortress of Solitude erupting through the Super Friends’ home base.

This now rebranded “Hall of Punishment” serves as a museum to this world’s fallen heroes, wiped out on “Hero Day”, when all the metahumans of the world lost their powers…and all the “ordinary humans” gained them. Superman’s death, as depicted in the museum, is both horrific and cartoonish, reminding me of some kind of Mad Magazine parody gone wrong.

Still outlaws, it isn’t long before Artemis and Bizarro join up with resistance on this Earth. It’s fitting that no matter where they go they get branded as such, and with new looks, too! Bizarro is now bearded and Artemis has shaved off half her head. As the story progresses, we see they aren’t the only familiar faces who’ve had a makeover…

Art on annuals can be hit or miss in my experience, but I’m happy to say Pollina knocks it out of the park with his clean, but detailed style. His Bizarro is massive and powerful, but still retaining that childlike element to his character and expressions. Artemis is confident and strong, every bit the Amazon warrior. When she finally glimpses what may be her way home, a Monsters, Inc. style portal, hope is palpable on her this-is-too-good-to-be-true expression. Villains are grotesque and distorted, especially the big brain behind the whole operation. Readers can certainly expect some familiar names attached to not-so-familiar looks.

Lobdell creates a dystopia that feels equal parts Marvel Comics and DC. The captions closing out the end of chapter one feel out of place, even for this offbeat story, trying to channel both Stan Lee and the announcer on Batman ‘66. I got some serious X-Men vibes from the new Outlaws that team with Artemis and Bizarro, excluding Jack Knife, who obviously is channeling his inner Joker. The villains’ evil plan could be ripped from a James Bond movie, as long as you think on a multiversal scale. It’s all a lot of crazy comic book fun, especially with moments like Bizarro’s battle cry of, “Outlaws…OUTLAW!” This is definitely not a book that is taking itself too seriously…this month.

The chemistry between Artemis and Bizarro is still strong, their situation only serving to strengthen their bond with each other. They’ve got a few nice moments together, but they spend most of the second half apart. After so much time away, I was hoping for a little more interplay between the two, but I’ll take what I can get.

So, now we know where our missing heroes have been and what they’ve been up to, but will they return? I, for one, would love to see what “Year of The Villain” would mean for them, especially if we could see Pollina’s pencils come back, too.

Red Hood and The Outlaws Annual #3 wisely gives the missing Outlaws their time to shine while Jason has been trying to be a prince of Gotham. If you’re looking for a jumpstart into “The Offer” and “Generation Outlaw” this isn’t it, but if you wanna catch up with some old friends, you’re in store for an alternate reality romp with some great art! – Javier Trujillo

Did Matt Reeves Reveal Part of THE BATMAN Logo? – UPDATED!