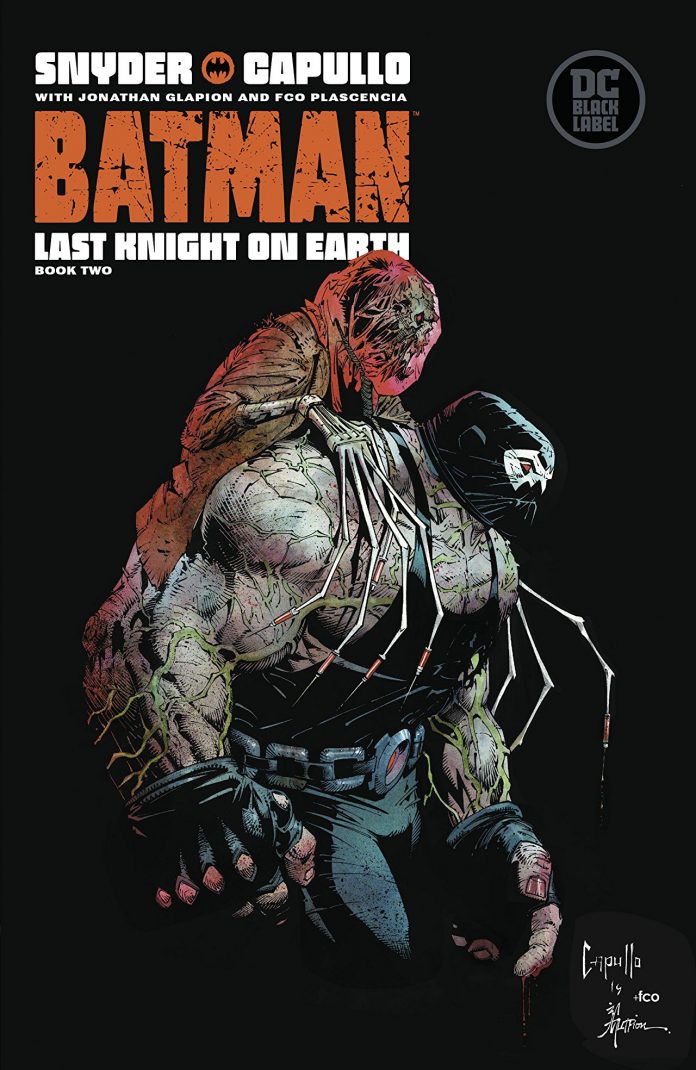 SYNOPSIS: The world has been destroyed, and Batman is on a quest to find out who’s responsible. But when villains from his past begin to complicate things for the Dark Knight, he finds an unlikely ally in a place known as “the Plains of Solitude.”

Omega: the last of any series; the end.

Omega (to Ryan): the word that makes him close the book and read something else.

Batman: Last Knight on Earth continues this month, with an even crazier chapter than its kickoff issue back in May.

It’s constantly on the move and creates more questions than answers. Sadly, to me, that’s why it didn’t work as well. In the previous issue, writer Scott Snyder planted the seed to many different stories, creating mystery and excitement. I’m good with that, as it captures my interest and has me looking forward to the journey for answers. However, I didn’t get any here and instead have more questions.

After this issue, here’s what I’ve gathered (strap in):

Batman goes to settle a case. He finds a boy that looks like him, in Crime Alley above his parents. He wakes up in a hospital that is apparently making him think everything was a dream. Except it wasn’t. Now, the whole world is a Mad Max apocalypse and The Joker’s head is in a jar. Many known heroes are underground or dead. Wonder Woman fills Batman in that a Batman has died, but a machine creates new Batmen. There are baby Green Lanterns. Omega is mentioned. Bane is carrying the Scarecrow on his back, and they find Alfred. An Omega Batman kills him. Batman ends up on a farm. Lex Luthor is skinny and created Supermen. Batman and Wonder Woman hop in a boat under the Spectre’s cape. They see dead people. They arrive in Gotham and are confronted by the Court of Owls. He is reunited with an ally.

This book is called Batman, yet it reminds me of Metal, which I didn’t really care for. However, that would suit this story better because though it’s titled “Batman”, it’s a bit of a supernatural story with some cosmic stuff included. It could fit as a Justice League story, But as a Batman one, it’s just sort of a turn off for me.

Enough with my complaining though because I did like some stuff here.

The scene on the farm with Lex and the Supermen was pretty cool. Luthor’s plan of “one last debate” against the Man of Steel is a pretty clever idea. The river scene was also eerie and delivered on giving a horror vibe.

Greg Capullo’s art is always nothing short of phenomenal. He’s asked to draw some crazy images here, and he doesn’t come up short. The blends of genres come at ease with the comic veteran. We jump from horror, to action, to thriller, to drama and more without any hiccups. Regardless of my hesitation on the story, I have no problem saying I loved how every panel looked.

That brings me back to the story. After hints in the last issue that this could get too “out there” for me, I remained optimistic that parts would click and start to make sense. Sadly, they didn’t, and I was getting more and more turned away as I kept reading. It’s not a knock on Snyder in any way, it’s just not the type of Batman story that I enjoy. Elements were really great, and Batman is pretty spot-on. But the plot felt convoluted and confusing more often than not.

I’ll be sticking around for the conclusion in issue #3, but I’m not as excited for it as I once was. – Ryan Lower