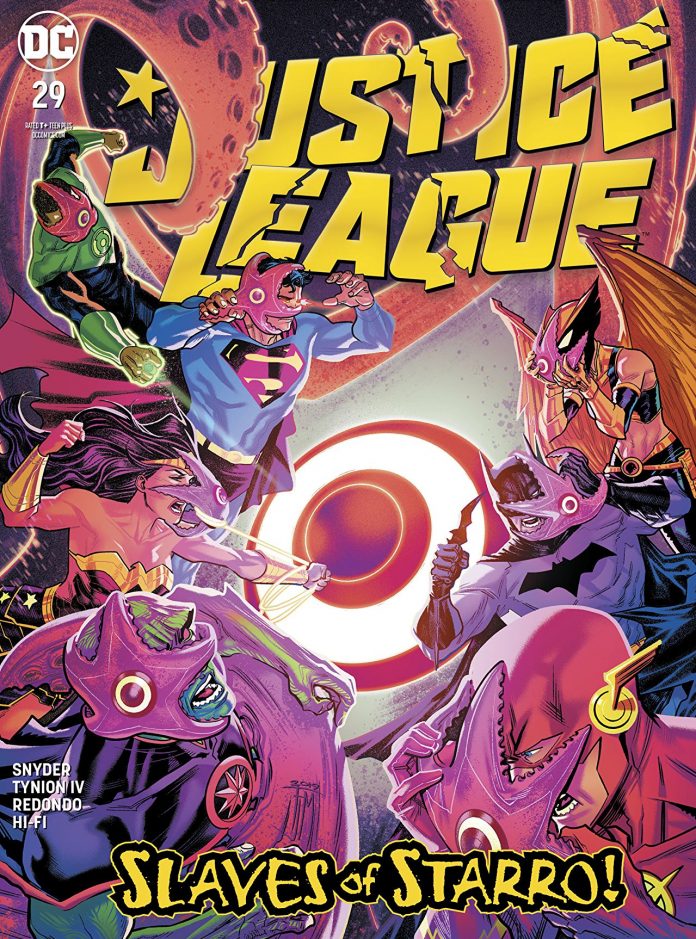 SYNOPSIS: Does a Starro dream of an electric Justice League? Sensing the danger to come, Jarro fears for his newfound friends. He ponders each one and their potential fate to decide whether he should mentally block them from going forward into what could be certain destruction…the coming war with the Legion of Doom!

“Jarro’s Tale: A Justice/Doom Prelude” may very well be the most important issue of Justice League in months.

Notice that I didn’t say that it was the best issue in months. In fact, from a storytelling standpoint, I think it might be on the lower end of the last dozen issues or so. Now, that’s still a pretty solid thing given the quality of this series, so don’t take that as a sign that I didn’t enjoy this book. And more importantly, it serves a much-needed purpose.

While the story is billed as a Jarro-centric one (it is) and a lead in to the Justice/Doom War (it’s that too), it’s true nature is to get new readers an understanding of what exactly has been unfolding in this title and the greater DC Multiverse in advance of a major event that DC believes will pull back more casual (and hopefully new) comic readers into the fold. Even for readers that have been with this title for a while, Justice League #29 is a necessary recap of some dense storytelling. It serves a function that’s welcome, even if it doesn’t stand up to the storytelling quality of some of this run’s best.

Scotty Snyder and James Tynion IV share writing duties on JL#29, something they’ve done on and off on this series, however here they share the credit entirely instead of Snyder writing the story and Tynion covering the words.

I’ve given Tynion a hard time before. He’s a talented writer, but he has some less-than-stellar tendencies that, when not kept in check, can get in his own way. He can fall in love with his own words too much, going overboard with wordy and grandiose speeches or narration, and there is a TON of that sort of thing going on here. Jarro delivers an overview of Starro’s entire history and essentially all the events that have taken place since Dark Nights: Metal.

Also included is an overview of six of the seven known Dark Forces that Luthor needs to unlock in order to bring, the always-discussed and rarely-seen, Perpetua back to her full form and strength.

That’s a whole lot of story to cover. Tynion does some heavy-handed retconning in this section, renaming or reframing various elements from previous storylines as Dark Energies. It’s all a bit much, and while serviceable, repetitive words use, overly romanticized language and just plain too much text gets in the way for this section to really click.

Almost everything else here really works. It’s an impressive feat to have created a character in Jarro, that is so silly on its surface yet still capable of stirring up a real emotional response from the reader. The action elements of his “attack” on the Legion of Doom and the twist of what is truly taking place are handled well with some fun and exciting action beats.

The art throughout the book is excellent with Bruno Redondo handling the pencils/inks and Hi-Fi providing the colors. The two create some impressive visuals with fluid action, textured surfaces, and rich scenery. As difficult as the narration beats were to read through, the art is helpful in converting the story beats and ultimately saves those sections from breaking down under their own weight.

This is a must-read story from a mechanics standpoint first and foremost. You won’t want to miss it; whether it’s getting you caught up or recapping the necessary developments as we head into the Justice/Doom war. The Jarro storyline is well done and further develops the character.

This isn’t an awesome issue, but it’s one you can’t afford to miss. – Garret Grev

INJUSTICE VS. MASTERS OF THE UNIVERSE #5 Review by Garret Grev