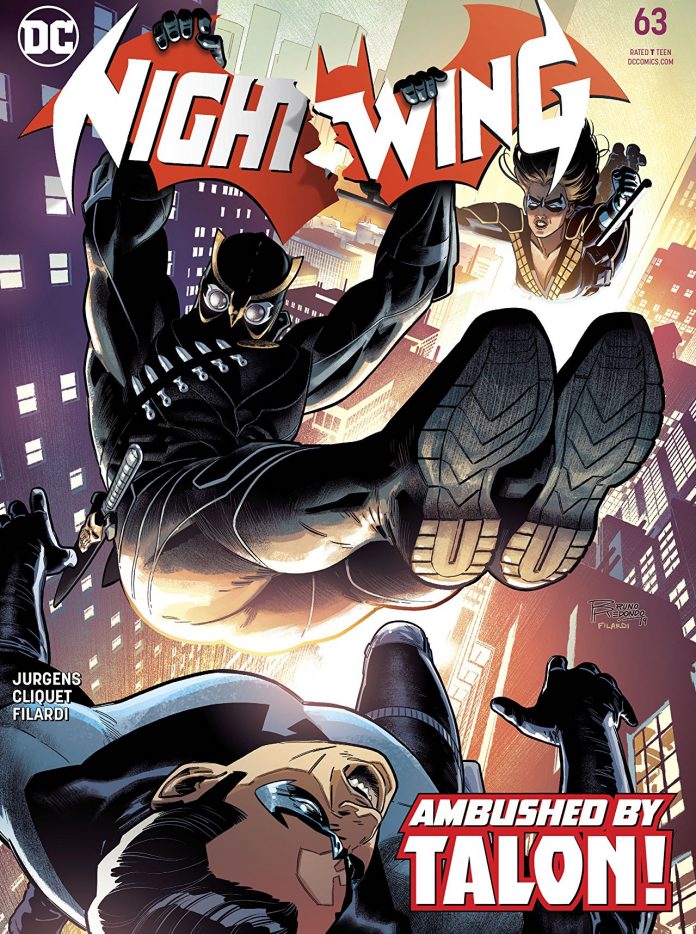 SYNOPSIS: While the Nightwings recover from their last battle against the fiendish Burnback, Ric reflects on the small portion of his past that he remembers—life in the circus as the youngest member of the Flying Graysons—in hopes of finding any clues as to what kind of man his parents hoped he’d become…perhaps a certain Talon has the answers he seeks?

“In the East, the Far East, when a person is sentenced to death, they’re sent to a place where they can’t escape, never knowing when an executioner may step up behind them, and fire a bullet into the back of their head.” – The Mystery Man, LOST HIGHWAY

NIGHTWING #63 was a solid follow-up to Talon’s introduction as events slowly build-up to a bloody encounter.

I won’t give away when the attack comes because the waiting is glorious. There’s a tense moment where the reader sees a weapon drawn, out of view of the protagonist, and you keep waiting and waiting for the villain to strike.

To me, it came off as a very Orson Welles-like move, with the same vibe as the opening of “Touch of Evil” where the audience knows a bomb is ticking in the back of a car and the characters blissfully go about their business not knowing about the danger. You just want to yell at the pages!

We start out with a power outage in Bludhaven and criminals, not to mention a fair number of everyday citizens, are taking advantage of the darkness by looting. The city has been experiencing rolling blackouts and with summer heat hitting hard I can relate to random brownouts/occasional blackouts as power grids get strained.

Grayson and Zak Edwards, aka “Nightwing Blue,” fight a gang of robbers who are stealing high-priced art from a museum. It’s fun to see the contrast between Grayson, who has sworn off guns, and Zak, a police officer by day who has no problem packing heat to arrest a thug.

Grayson and Edwards are paired well, both are comparable in age and don’t take the superhero gig too seriously. They defeat the would-be robbers and talk about grabbing a beer sometime. Things are getting more chummy for Team Nightwing.

We get a break from the series’ regular rotation of artists as the same crew from NIGHTWING #62 return: Dan Jurgen as the writer, Ronan Cliquet the artist and Nick Filardi the colorist. I really dig the cover by Bruno Redondo where the Nightwing marquee/header is broken in half, with Talon swinging off of it to strike Nightwing down.

I have few gripes with this issue. The story is tense and straightforward. The art flows just fine. If I did have a nitpick it would be the daytime panels of Bludhaven where the city looks a little too clean. Although, in some of the recent issues Bludhaven has been going through a gentrification period so I suppose some of the well-off areas of town, especially close to City Hall, would get a make-over.

I’m still not sure if I care for Grayson’s new Nightwing suit, though. – James Armstrong