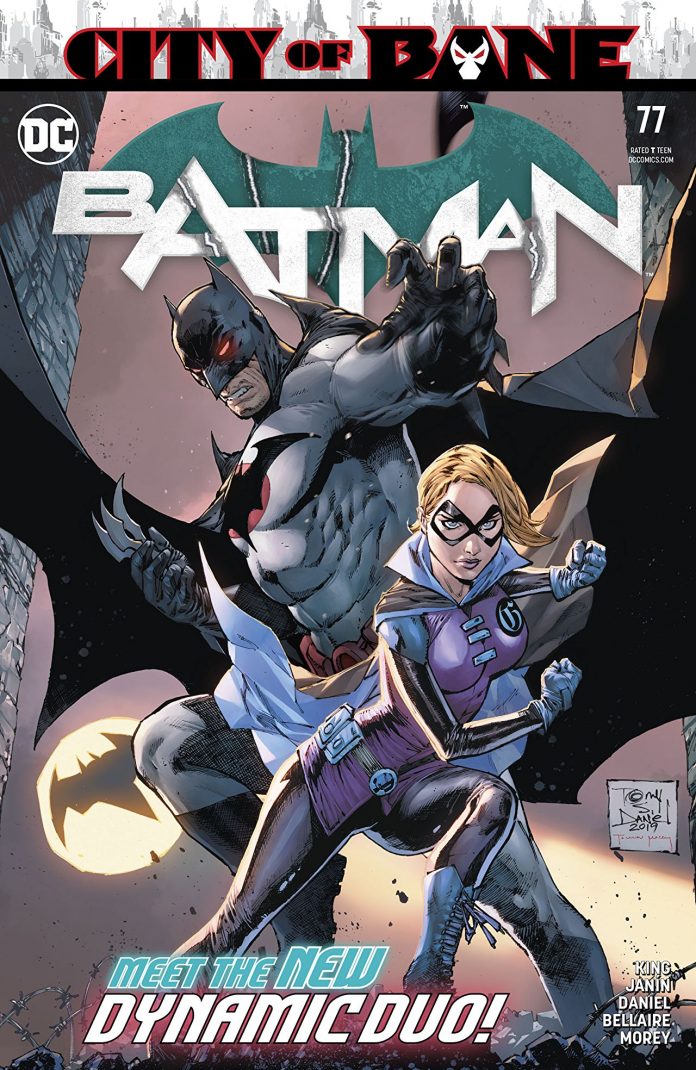 SYNOPSIS: “City of Bane” continues! The last of the independent villains are on the run, leaving Gotham City entirely to Bane and his cronies—including Flashpoint Batman and Gotham Girl! Though this means a semblance of peace on the streets, the iron grip of tyranny is squeezing all life out of Gotham. And with Bane’s machinations keeping other heroes out, the city really needs the Batman to return. Is Bruce Wayne ready to face his toughest foes yet…his father and the man who broke his back?

For the longest time, I had a hate/tolerate relationship with Damian Wayne. I found him to be an arrogant little punk whose sanctimony was anything but endearing.

But as time went on, I began to understand Damian in a different way.

It wasn’t hubris or privilege that made him so abrasive. Rather, he was angry that no one around him, up to and including his own father, seemed to understand the value of the standard of discipline he so rigorously held himself to. Since then, I’ve understood and enjoyed him a lot more.

Then there’s Gotham Girl, the troubled young woman whose powers kill her a little more every time she uses them. She’s endured so many mental turmoils and emotional anguishes in these pages that I’ve never stopped rooting for her until recently when she seemingly embraced the easy, intoxicating path of villainy. I’d still much rather see her tale end in redemption than tragedy.

At the top of BATMAN #77, Gotham Girl catches and corners Damian on a rooftop and taunts him with all the ways she’s going to burn him alive with her atomic eyes for his sin of infiltrating the City of Bane. From Damian’s point of view, however, he’s not the one who’s been caught and cornered.

Regardless of its outcome, their encounter brings Damian domino mask-to-cowl with Thomas Wayne’s Batman, who refers to the boy as his grandson. Damian’s having none of it. The tension in these panels is unbearable because we know that Thomas’s ruthlessness outpaces Damian’s defiance by a margin more monumental than the significant number of pounds that separates the youngest Robin from the man defiling his father’s mantle. Their conversation, both in words and traded blows, is incredible.

But there’s a price to be paid.

Because you see, Bane has warned what will happen if any members of Batman’s family enter Gotham City. Will he keep his promise?

Meanwhile, Bruce Wayne is still asleep on a damn couch in Paris. He wakes up long enough to take Selina Kyle to a little French cafe that evokes their liberating moment in THE DARK KNIGHT RISES, and he invokes another famous Batman “ending” in his tedious moping about how he has to go back to Gotham City because, well, he has to!

This is a far, far, far cry from the literal fist-pump I did in issue #74 when I thought we were finally getting some forward motion on Bruce’s being anything but broken. I wouldn’t trade that initial issue of “City of Bane” for anything, but the whole “broken Bat” thing is wearing thin.

The main event here, however, is Damian’s story, and it resolves (for now) in such a big, blustery, shocking way that it isn’t even effective, because there’s no way that what happens is real. And even on the 0.000001% chance that it is real, there’s absolutely no way it sticks. It’s effective for Damian, of course, but I expect it to be revealed as a ruse to the rest of us soon.

I like Tony Daniel’s art, and he handles the Bruce/Selina Parisian scenes with appropriate aplomb, but I’m glad it’s Mikel Janín’s uniquely handsome (and handsomely unique) pencils and inks tackling the Gotham Girl, Damian, Thomas Wayne, and (redacted!) encounters. It’s some of the best work he’s ever done in these pages, with the book’s secret-weapon-extraordinaire Jordie Bellaire nuking the panels from orbit with colors that bring a moody, ominous energy to even the mostly colorful explosions of action. The green hues in the initial encounter between Damian and his not-grandfather make the kinds of pages that win all the awards. Tomeu Morey colors the Tony Daniel stuff, and the shades of the awnings of the French cafe are particularly and impressively pretty.

The Damian Wayne story here is superb and makes this one worthy of recommendation all on its own, even if there’s no way what happens at the end of it is real or sticks. It’s real to Damian, so I’m legitimately curious to see what the gimmick is.

As for the Paris stuff, I’m beginning to feel as jerked around as Bruce Wayne has been these many, many, many issues since the non-wedding “wedding” in #50.

I’m ready to get to it, and I know a lot of you are, too, but I’ll keep trusting Tom King until he gives me a reason not to.

This one’s got me wavering a little bit. – John Bierly