SYNOPSIS: GODZILLA: KING OF THE MONSTERS, The follows the heroic efforts of the cryptozoological agency Monarch as its members face off against a battery of god-sized monsters, including the mighty Godzilla, who collides with Mothra, Rodan, and his ultimate nemesis, the three-headed King Ghidorah. When these ancient superspecies, thought to be mere myths, rise again, they all vie for supremacy, leaving humanity’s very existence hanging in the balance. 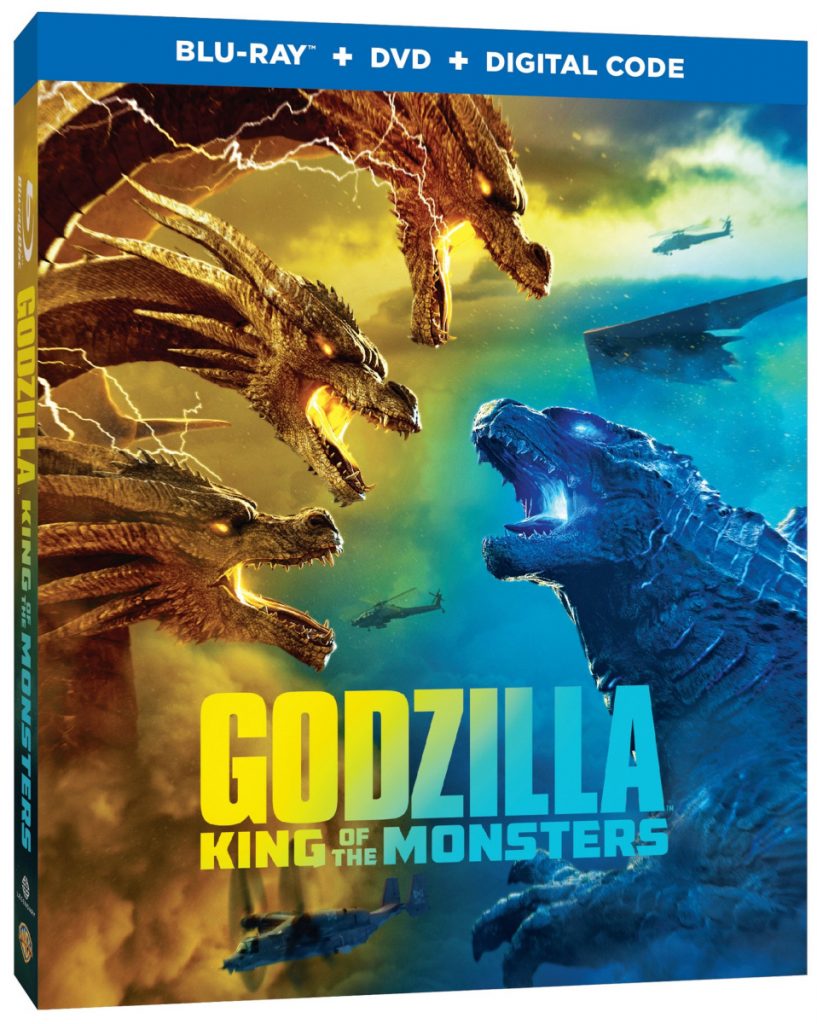 Available now on digital (and on Blu-ray/DVD on August 27, 2019), GODZILLA: KING OF THE MONSTERS came and went this past summer without making much noise. Critics weren’t fond of it, and the general audience was hit-and-miss…those who showed up to the theater.

For a monster movie, the plot is complicated…yet simple.

Basically, a secret signal is waking up huge creatures (titans) all around the world. This includes some bad dudes, mainly a three-headed dragon named King Ghidorah. Fortunately, Godzilla also awakens and is set to take this beast head (and head, and head) on. While the beasts attempt to destroy each other, and the planet, two different groups of people are also trying to….kill them? Not kill them? Free them? I don’t know. People are getting in the way.

Dougherty (TRICK R’ TREAT, KRAMPUS) has a passion for Godzilla, and it shows. There’s a lot of cool sequences throughout the film, delivering the action fans have been asking for since 2014’s disappointment. Sadly, part of it seems a little clumsy, hard to see (the snow fight), and most surprising, not as fun. Don’t get me wrong, I mostly liked what I saw, but some of the action pieces weren’t as enjoyable as I’d hoped.

Kyle Chandler (FRIDAY NIGHT LIGHTS), and Vera Farmiga (THE CONJURING movies) do what they can on the human side, as exes torn apart after Godzilla’s last battle. They end up on opposing sides of the titans’ debate, giving us an interesting dynamic to care about. They do a good enough job, and I’ve always loved them both, so it’s a plus in my eyes. Unfortunately, their daughter, Millie Bobbie Brown (STRANGER THINGS), is wasted. The fan-favorite of the hit Netflix series is often staring at the camera, smirking, or screaming. She should be an emotional core to the film, but instead is forgotten.

The rest of the film is a who’s who of recognizable faces, from Monarch employees, to the military, to politicians. Everyone does a decent enough job for what’s required, there’s just not a lot they’re asked to do.

Godzilla fans overall should be pleased with the movie. You wanted monsters? You’re getting them here (Godzilla, King Ghidorah, Rodan, Mothra). The clash of the titans delivers plenty of action and destruction to feed your appetite, which is basically all we’re asking of a Godzilla movie.

While KING OF THE MONSTERS isn’t the crown achievement Warner Bros. was looking for, it is an improvement on what’s come before. It just could have been better.

Maybe for the next round, a giant ape could be brought in to up the ante. Hmmm… – Ryan Lower