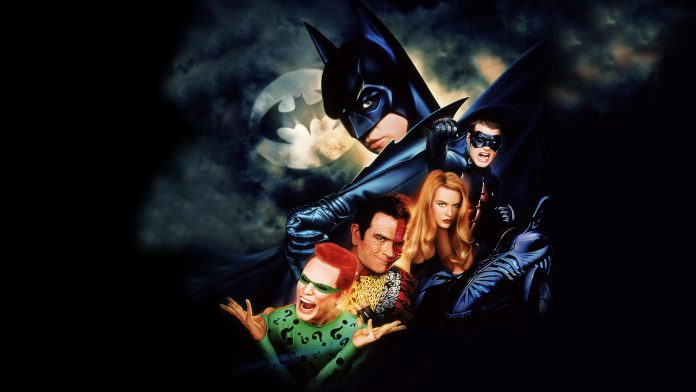 Can you believe it’s been 25 years since Joel Schumacher, Barbara Ling, and Akiva Goldsman delivered the neon 1990’s blockbuster that is BATMAN FOREVER? I know I can’t.

The story of BATMAN FOREVER is not overly complicated.

While BATMAN RETURNS was a hit critically, it was not with parents and made less money at the box office that its 1989 predecessor, BATMAN.  Phones rang off the hook and letters were written by angry parents complaining about the film. Not only did Warner Bros. get an earful, but so did big-spending sponsors like McDonald’s.  This was a summer tent pole and that’s supposed to mean megabucks.  BATMAN RETURNS was dark and full of sexual innuendo and that just wasn’t what parents wanted in their kids’ movies.

Let me tell you a little story.

My mother didn’t harass Warner Bros. the way that others did. But I am one of the reasons we got BATMAN FOREVER. BATMAN RETURNS scared the hell out of me and my brother, Mike.  One day, Mike and I were watching BATMAN RETURNS on VHS and we got to the stuffed animal/garbage disposal scene. It was at that moment I ejected the tape and tossed it in the trash never to be scared again!  Now, I have grown to defend BATMAN RETURNS, claiming it to be the greatest Batman ELSEWORLDS on film tale ever told… but that’s another article for another day.

Here, we are going to look back at BATMAN FOREVER, a movie that will always have a special place in my heart.  I remember buying the novelization of the film at a book sale before school closed for the summer.  I read the movie adaptation comic over and over in anticipation.  I watched MTV all day to see Seal’s “Kiss From a Rose” music video just to hold me over.  Everywhere I looked, there was the question mark logo, and I was hooked.

I remember the day the film came out and nine-year-old Peter had his first experience with Batmania. I couldn’t contain my excitement. My first live-action Bat flick.  My older cousins, Meg and Mar, were in high school at the time and they had such a huge influence on me, and still do.  I remember they called the house late one night and asked my mother if they could take me to see the film.   My brother was fast asleep so I had to “sneak out” of the house so he wouldn’t wake up.  This kept getting better and better! Not only was I seeing Batman on the silver screen for the first time, but I was seeing it with the “big kids” while leaving my little brother at home.

I had finally made the big time!

I sat there in the theater in awe from the opening credits to the opening scene in the Batcave.

Seeing the car rise from under the cave!

That was my first ever cinematic Batman experience and for a nine-year-old boy, what more could you ask for?  The answer is nothing. In the first five minutes of his film, Joel Schumacher wiped away all the black goo that stained the last film.  BATMAN FOREVER went on to be one of the biggest hits of 1995, restoring The Dark Knight to his rightful place as the King of the summer blockbuster!

But something happened in the years that would pass.

I would lump BATMAN FOREVER in with BATMAN & ROBIN and BATMAN ’66, for its campy attitude.  The lighthearted Batfilm that created the fan I am today wasn’t serious or cool enough.  I mean, nipples on the Batsuit? Come on, that’s not Batman!  My teen years were not as kind to BATMAN FOREVER as my adolescence.  In fact, it wasn’t until around BATMAN BEGINS that I started to ease up on BATMAN FOREVER.  I’m sure many of you had similar feelings from 1997-2005.

Last summer, during the celebration of Batman’s 80th Anniversary, Warner Bros., DC, and Fathom Events re-released all four of the original films one day each amounting to four showings a day.  I saw all four with various friends, but there was something special about seeing BATMAN FOREVER on the big screen for the first time since 1995.  It brought back all the memories I had as a nine-year-old boy.  By the time the end credits began to roll, I remember saying to myself, “That was a better cinematic experience than BATMAN RETURNS.”  It left such an impact on me I had to call BOF icon Ryan Hoss just to talk about it.  I left the film hopeful and joyous, and that is just what the film wanted to do from the get-go.  Restore some law and order in the world of The Caped Crusader.

Now in my personal Batman on film rankings, I have BATMAN FOREVER ranked at #7 out of the 10 live-action theatrical films.  However, I have nothing but fond memories of this movie.  Sure, it has its issues. The Riddler has some Mad Hatter in him.  Tommy Lee Jones is wasted as Two-Face. Outside of the opening action scene featuring Two-Face, he’s just trying to outduel Jim Carrey (which is impossible).

But there is a lot of good too. Stunning production design. A Gotham City that is truly a city of the future. Lavish set pieces. A tremendous soundtrack. The most underrated Batman of our time in Val Kilmer. And some of the greatest toys any Batfan could ever collect (not to mention those indestructible glass McDonalds mugs).

While not perfect, BATMAN FOREVER is a comic book movie that is nothing but enjoyable from the first scene to the last.