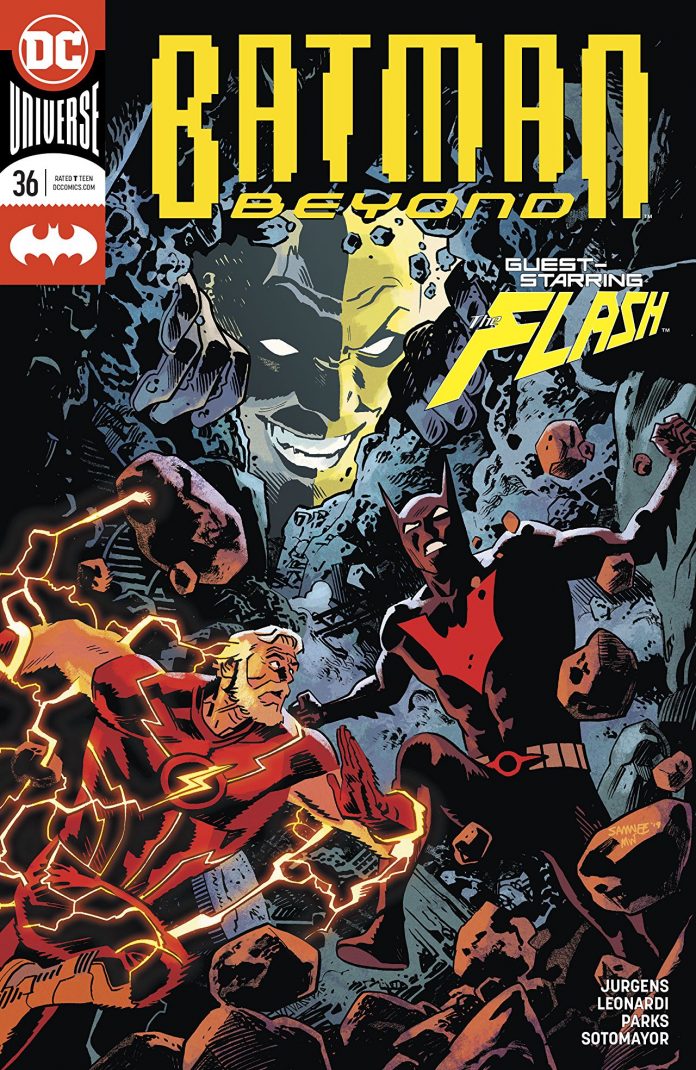 SYNOPSIS: “Lost Daze” finale! As everything around Neo-Gotham crumbles under Batman’s iron fist, the Fastest Man Alive might be the only one capable of saving Terry McGinnis and his city. But as powerful as he is, even the Flash might be no match for the Splitt and the mysterious False Face!

We’ve reached the end of this journey known as Divide, Conquer and Kill, and what a journey it’s been. With the introduction of Barry Allen into the Batman Beyond timeline, we’ve got a hero who can battle other speedforce users on a level playing field.

As expected, Barry is mostly relegated to fighting Caden and Adam aka The Splitt and later helping them. Melanie/Ten takes care of False Face, and FF’s endgame is finally revealed, dump Terry’s body in favor of The Splitt’s to be able to separate into two people as well as have superhuman speed.

Once again, we see that Bruce, even in his old age, is still two steps ahead of his adversaries as evidenced by Melanie’s fight with False Face. The banter throughout the issue with Bruce and Barry is also well written and what you would expect from the characters.

Leonardi’s art in this issue is the best of his run with one exception. Towards the end of the issue, there’s an image of Batman on a monitor and nothing about it looks right. The eyes are uneven, the proportions aren’t right, it’s just not a good image in my opinion. Besides that, he’s produced a beautiful piece of work.

Contrary to the trend, Dan Jurgens ended this story arc strong. Most importantly though, he didn’t end it with some cliche ending where everybody ends up happy. The issue actually has a bit of a bleak feeling at the end and I think it sets up the next arc in a very compelling way.