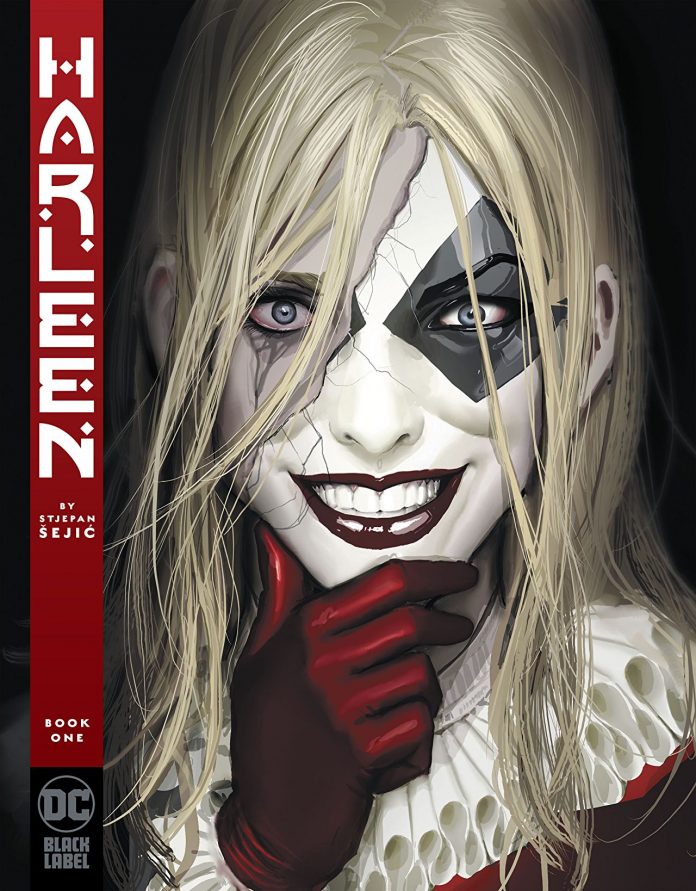 SYNOPSIS: Dr. Harleen Quinzel has discovered a revolutionary cure for the madness of Gotham City-she just needs to prove it actually works. But with the criminal justice and mental health establishments united against her, the brilliant young psychologist must take drastic measures to save Gotham from itself. Witness Harleen’s first steps on a doomed quest that will give birth to the legendary super-villain Harley Quinn in this stunning reimagining of Harley and The Joker’s twisted and tragic love affair by visionary storyteller Stjepan Šejic (AQUAMAN: UNDERWORLD, SUICIDE SQUAD, Sunstone).

Earlier this year, I wrote a piece on BOF asking DC to explain to us what the “Black Label” was. At that point, BATMAN: DAMNED had released two issues, with a third being delayed, and these long-rumored books were nowhere to be found.

DC must have read that post (joking) because Black Label is off and running.
Following DAMNED, they’ve also released BATMAN: LAST KNIGHT ON EARTH, SUPERMAN: YEAR ONE, CURSE OF THE WHITE KNIGHT, and now HARLEEN.

THIS is the Black Label I was hoping for.

Written, and drawn, by the incredibly talented Stjepin Stejic, Harleen retells the story of the one and only Dr. Harleen Quinzel, and how she (eventually) turns into the charismatic, unpredictable and somewhat damaged antihero Harley Quinn. Her evolution is what this 3-issue series is about, and since it’s under the Black Label, there are no rules.

I think that’s what excites me most here. This is a self-contained story, and Sejic has the keys to Dr. Quinn’s office. He really takes his time establishing the character, and planting the seeds that we fans know will sprout in future issues. She works her way to becoming a doctor, she shares empathy with patients, she has dreams/visions of The Dark Knight, and she encounters The Clown Prince of Crime. None of this is anything new, but everything is fresh and unique. Harley Quinn is a great character because there’s a lot going on internally, and Sejic really capitalizes on laying that groundwork. It’s a patient story he’s telling, and that’s refreshing.

Of course, his artwork is a feast for the eyes. The opening pages of this first issue take us inside one of Harley’s dreams where the Batman is clouding over her in a terrorizing way. It immediately shows us the perception she has of Gotham’s hero, and where she’s coming from. While Sejic nails the trippy dream sequences and the action, he also displays great emotion on the smaller moments; her nerve-wracking presentation, her encounters with a work enemy, an initial feared meeting with Lucius Fox. No panel is wasted and works brilliantly.

Speaking of Fox, this book is a blast because of the scattered guest appearances of many Gotham characters we’ve grown to know and love. I won’t name them here, because it’d be more fun for you to see them for yourself.

Overall, I can’t say enough about the initial issue of HARLEEN. Sejic takes his time over these 60+ pages, investing us in this character so we can empathize with her ups and downs as she descends into madness. The book is a knockout and should keep you invested in the Black Label. – Ryan Lower