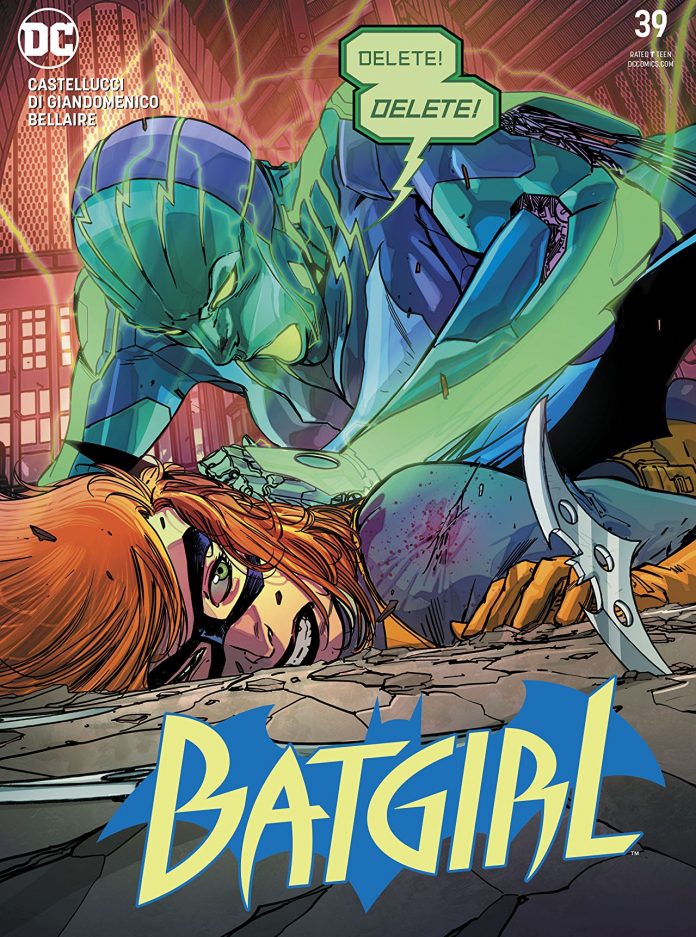 SYNOPSIS: After learning about “The Offer” from Killer Moth, Batgirl is on the case to figure out who is behind the rise of the villains in the DC Universe! Meanwhile, the Terrible Trio has gained full control over Oracle and is forcing her to cater to their every whim. But what happens when their puppet decides to cut her strings? Could this be the end of the Terrible Trio?

OK, remember how I was all excited about Batgirl’s new costume last issue? (You probably don’t and that’s fine.) Well anyway, that lasted a sum total of one issue, because she’s back in her previous costume by the end of this one. It’s not that I don’t like this outfit, but it does seem less like something Barbara would have designed herself, more sex appeal and less practicality, and – what a weird tease? Just to bring out something cool and new and then flip it next issue… it’s an odd choice. But hey, return of the lunch backpack!

As far as the story goes…well, not a lot happens this month, at least until the last few pages. The issue actually starts off with Oracle battling Batgirl in her old costume, which had me very confused until I read on a few pages more. It turns out that Oracle is running training simulations to try to ensure she can defeat Batgirl, while Batgirl spends a few pages trying to recover her old Oracle program in her clock tower lair. From there, a large chunk of the issue consists of The Mundane Adventures of Barbara Gordon and Jason Bard: Congressional Aides. This portion of the story brings Barbara back to her former home of Burnside while Oracle realizes that this is the very place she can strike to draw Batgirl out for a fight.

Back in costume, Batgirl patrols the streets and finds the citizens of Gotham acting with no regard for the law or social norms but supposedly in the interest of “the greater good”. Several bits of dialogue and *sigh* editor’s notes reveal that this is a result of Lex Luthor’s meddling in service of the overarching “Year of the Villain” storyline. Okay then, moving on.

The issue is not without its strong points. Artist Carmine Di Giandomenico keeps things interesting and does his best work when Batgirl and tall buildings are involved: arriving at her clock tower, swooping down to break up a mugging, perched on a high ledge surveying the increasingly chaotic situation below.

While this was a rather ho-hum issue, the final page sets the stage for a showdown to come next month. I’m hoping for the action to ramp up and for this distant, building tension between Batgirl and Oracle to finally collide. See you then!