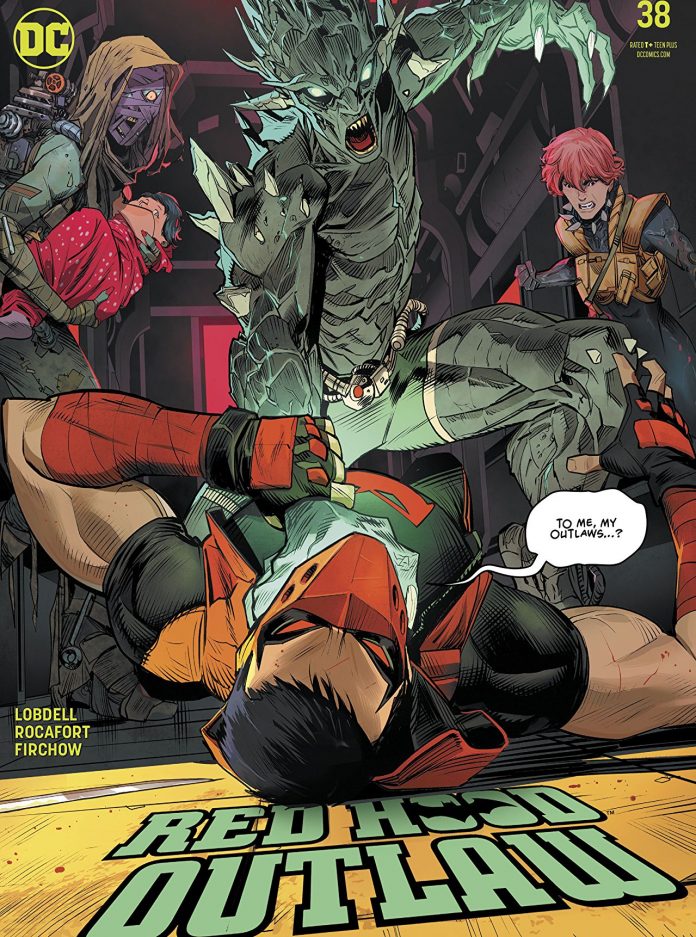 SYNOPSIS: This is the Year of the Villain, and Red Hood has been tasked by Lex Luthor with training the worst teens in the DC Universe to become the super-villains of tomorrow. But while these kids may think they’re the future of villainy, they’re about to learn they may already be doomed. Reiser is rampaging through a S.T.A.R. Labs facility, unleashed like never before. Can the Red Hood see DNA, Cloud Nine, Devour and the enigmatic Babe in Arms safely home, or is this one field trip no one should have gotten permission to go on? Plus, where in the world are Artemis and Bizarro now?

Let’s answer that last question first-Artemis and Bizarro are still somewhere between dimensions and while this issue doesn’t move them any closer to home, the duo makes a startling discovery! Ma Gunn, imprisoned into her own version of the Bottle City of Kandor back in Red Hood and The Outlaws #18, is found by the pair, with Bizarro having no memory of how she got shrunk and placed on display in a shelf in his quarters. It’s a mystery that Lobdell will return to and compound on at issue’s end. But before that…

Generation Outlaw and their teacher, Red Hood, have a bit of a quandary on their hands. Cloud 9 is trapped in the clutches of Doomed, who has seemingly killed a bunch of guards and is now devouring them. Jason, knowing his guns won’t have an effect, instructs his students to work together to capture the beast. Devour, being impetuous, jumps headfirst into the fray and thinks he’s captured the monster. His jubilation is short-lived as Doomed breaks free of Devour’s grasp, causing him to flashback to when he got his abilities.

The flashback, lasting only two pages, doesn’t really serve to add much insight into the proceedings or Devour’s mindset. He’s in a hospital in North Korea where he gets so hungry that he, well, devours an echocardiogram machine, which then results in his hands turning to jagged metal. Lex Luthor shows up, where he presumably recruits him. We don’t really learn anything about Devour that we didn’t already know and having Luthor show up also doesn’t add to things. We know he recruited all these kids for Jason to make the next generation of villains in the DCU.

After that brief detour, we snap back to the present, where the team is dogpiling onto Doomed. DNA does their version of a Vulcan mind-meld and urges the Outlaws to cease fighting, earning a slow clap from Red Hood.  It turns out it’s all just a misunderstanding-Doomed had turned himself over to S.T.A.R. Labs to be cured, but it hasn’t been working out. When they were attacked, he seized his chance to escape and was only eating guards that had already been killed by unknown assailants.

The whole misunderstanding feels very trite, but at the same time, it makes sense for Jason, someone who trained under Batman, to keep information compartmentalized and not let his team know the full extent of what was going on. In fact, he had already done his prep work and was intending on recruiting Doomed to join them. Seeing how his students would react when confronting Doomed was more of a pop quiz. The real test begins when Monster Arm and company show up to challenge Generation Outlaw. Presumably, they are the real threat, unless it’s just another misdirect.

Another wasted page was stopping to see Dr. Shay Veritas spying on Jason and his charges. Her voyeurism gets interrupted by a knock at the door. Since she is in the planet’s core, we can assume it’s not a pizza delivery, but we don’t get anything else in the scene to make it feel more ominous, not even a reveal showing a figure in shadow with a startled reaction of “YOU!?!?!” I guess we’ll have to wait till next month, but it’s a mystery I haven’t been made to care about. Given how the issue ends, we know it’s not Artemis and Bizarro.

Speaking of my favorite Outlaws, the issue ends focused back on them. Artemis is trying to console Bizarro, who is frustrated once again by the loss of his intelligence. Artemis makes a joke at Jason’s expense to lift B’s spirits, while at the same time, the bottle containing Ma Gunn wobbles and crashes to the floor. Bizarro crouches down to scan the wreckage for her, but gets interrupted by a surprise reveal, one I’ll leave for the issue, but makes me super curious where Lobdell is going with this as it doesn’t seem to be an illusion.

Art-wise, Rocafort delivers much of the same as last time. Interesting layouts with geometric shapes abound and Steve Firchow’s colors bring everything to life, helping establish a sense of space. Rocafort crams a lot of detail in, especially in a character like Devour, whose hands seem to be made up of hundreds of pieces of scrap metal. Rockafort also gets credit for the main cover, but it looks closer in style to Guillem March to my eye. The Professor X reference wasn’t lost on me. I found it a nice wink at Lobdell’s time served working for the other marvelous comic publisher.

While great to look at, Red Hood: Outlaw #38 has a feeling of “I’ve seen this all before.” I’m not terribly endeared yet to this next generation of Outlaws and found more empathy for Bizarro in one sullen glance than I did the whole team combined. Then again, these are all supposed to be the future Rogues of someone. Maybe I’m not supposed to care. If anyone is breaking out for me, it’s DNA. There’s something Star Trek-ian about their willingness to rationalize and look at things objectively. We’ll see what next issue brings, but in the meantime, this new setup is starting to feel stale. – Javier E. Trujillo