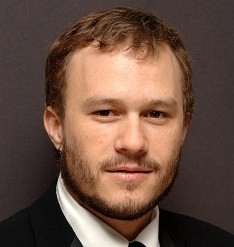 I didn’t know Heath Ledger, but I know the character he plays in THE DARK KNIGHT very well.

That’s how it is with fans.

From the moment filming began on THE DARK KNIGHT last year, word began filtering out from the set that Heath was doing something really special with the role. When I was on the set this past June, each and every person I talked to sung Heath’s praises. I got a lot of email from people who worked on THE DARK KNIGHT — big and small fish — and each and every one of them told me to expect to be blown away by Heath Ledger’s performance as The Joker. 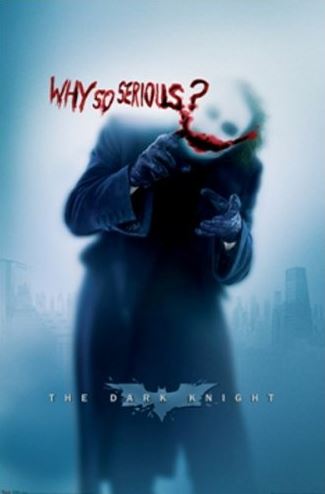 In my office hangs a framed movie poster from THE DARK KNIGHT — the “Why So Serious” one featuring Heath Ledger’s Joker front and center.

It’s not coming down.

I’ve been proudly sporting my “Heath-Joker” T-shirt around town and loved it when people asked me “Who the HELL is that? The Joker? Heath Ledger? No way!”

I was at my comic book shop this past weekend and I talked to a couple of guy’s who work there for at least a half hour about how badass the trailer is for TDK and how incredible The Joker is going to be in that film.

I happened to be at home today because my youngest son stayed home sick from school. In between taking care of him, I sat in my office and worked on BATMAN ON FILM. One of the things I did several times was watch that damn trailer. It’s mesmerized me since the first time I saw it last month primarily do to the brief — but powerful — glimpse of Heath as The Joker.

What’s nuts is that news has been slow of late and when news is slow, so is the email. But sometime right before 4PM Central, my inbox started going nuts. And when I pulled up my email, the subject line on who knows how many emails made me sick to my stomach:

At first, I didn’t want to believe it — it had to be BS because I do get a lot of BS email. I immediately go to an online news source and right there, right there on the front page, it was confirmed…

Can you mourn someone you’ve never met? I suppose the answer to that is yes, because that’s where I’m at right now. And based on the hundreds and hundreds of emails I’ve received this afternoon, I’m not alone.

I don’t know what to say — which is a really, really odd state of being for me. Somehow, my anticipation for THE DARK KNIGHT isn’t what it was just a few hours ago. I’m a Batman fan and that desire will return, but right now, I’m just damn bummed out.

I think about his family, especially his young daughter, Matilda Rose, who will now grow up without her father. I’m a dad three times over and it saddens me to no end to even think about the possibility of never seeing them again — and them not seeing me.

I think about Chris Nolan, Emma Thomas, Chuck Roven and their team that have been laboring in post-production on THE DARK KNIGHT. How in the hell do you continue on? I know they have to and that they will, but it has to be tougher than anything you or I can possibly imagine.

This summer Heath Ledger will be seen on screen as The Joker in THE DARK KNIGHT and audiences will be blown away by his performance.

Sadly, it’ll be the last time that we all get that chance.

And that is a crying damn shame. – Bill “Jett” Ramey

The Best Animated Batman Series With the Toughest Act to Follow