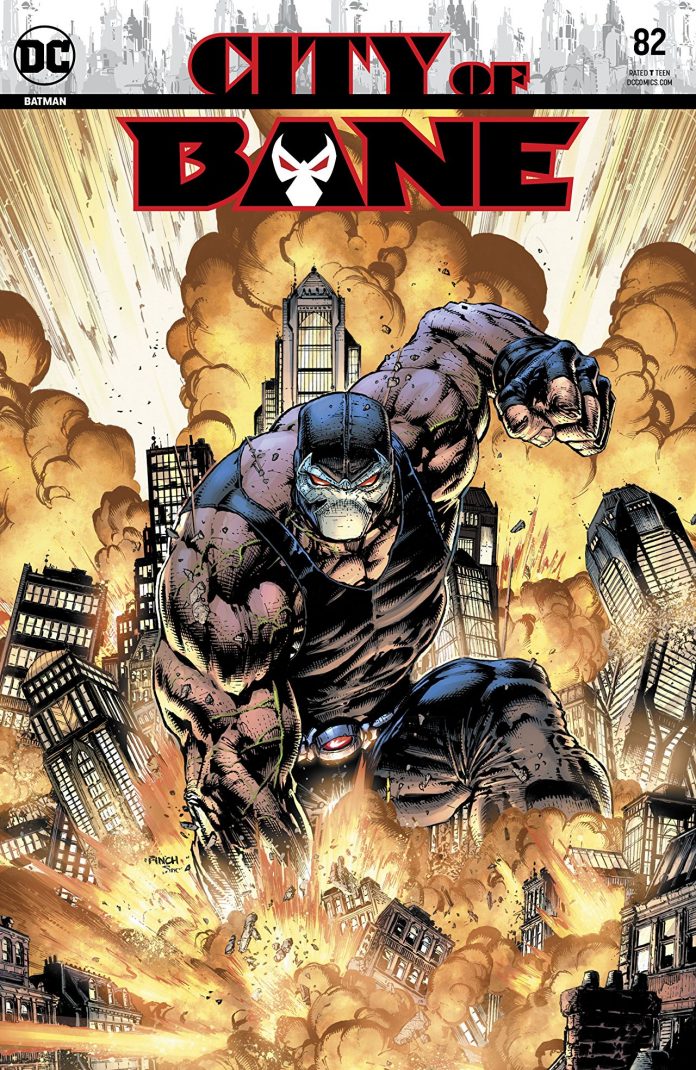 SYNOPSIS: “City of Bane” part eight! Batman and his allies wage war on the City of Bane, but an unexpected turn of events will send everyone reeling. Will there be another death in the family, or can the Dark Knight break Bane’s iron grip over Gotham City?

Tom King’s BATMAN #82 plays out a lot like the “I made you, you made me first” conversation between Michael Keaton’s Batman and Jack Nicholson’s Joker atop Gotham Cathedral’s bell-tower, except that it swaps out the who-made-whom verbal tango for another sweaty chat about who’s going to break whose back. But the culmination of the spine-smashing-back-and-forth that’s been happening between Batman and Bane fails yet again to culminate, as we get yet another issue that only barely nudges “City of Bane” forward.

As soon as Bane rips off his muzzle and declares “No masks” on the first page, I was immediately reminded by his bald head of why I found him much more interesting (and threatening) without his Venom infusions back in the “I Am Suicide” arc. It’s nice to see a more basic Bane again. Bruce doffs his cape and cowl, too, as he and Bane go all bare-knuckled-barrel-chested on each other. Bane also declares “No help,” but try telling that to Catwoman.

And he’s going to do something really bad!

We do see the fallout of Thomas’s battle with the Bat-Family as he makes moves to interject himself into Bane’s and Bruce’s brawl, and we find out what Batman and Catwoman did with all that venom they stole from Magpie off the coast of Hawaii. (Thankfully, it isn’t what I feared.)

Almost everyone here gets his or her clock cleaned in a bad, bad way, and yet not a lot happens in 20 pages. This is, yet again, another issue that will work better as an extended fight scene in the collected edition but doesn’t feel complete as a single chapter. The ending arrived so quickly that I actually tried to turn additional pages that weren’t there.

Mikel Janín’s pencils and inks capture raging faces and animate busy bodies to create action beats that are savagely staged and clearly choreographed. Jordie Bellaire dips the battles in amber and drizzles them with gold; once again she lights Thomas Wayne with steely greens for a truly ominous effect. (Does anyone else think the image of Bruce on the title page evokes Matt Wagner’s Caped Crusader?)

So I don’t say it lightly that this is the first “City of Bane” installment that has left me feeling frustrated, but I remain eager to see where he’s going with it before handing away the reins and spinning off into a new Bruce/Selina book with artist Clay Mann.

Until then, “City of Bane” abides, and its deliberate pacing and odd momentum are making it difficult to see what, and when, the ending might be.  – John Bierly

BATMAN AND THE OUTSIDERS #7 by E. Chad Metz