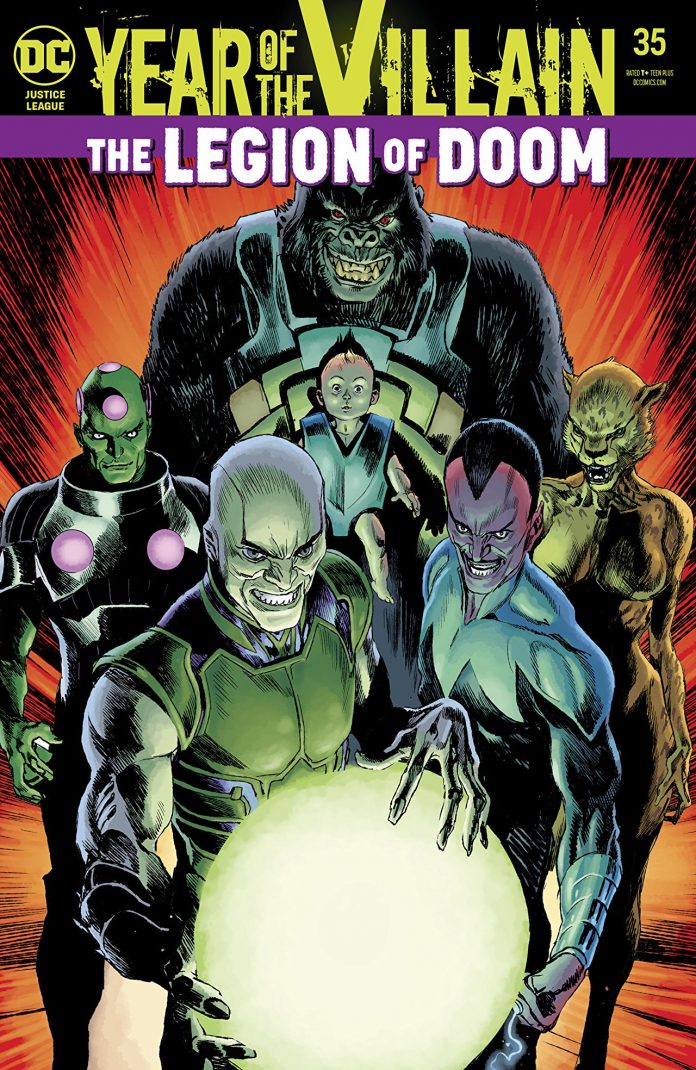 SYNOPSIS: This issue: Lex Luthor wins! Everything Lex has been working for over the past year and a half comes to fruition as he finally possesses the fully powered Totality and plans to bend Hypertime to his will. The Legion of Doom’s leader will defeat the Justice League once and for all and make his final pitch to serve at Perpetua’s side-and the Multiverse will never be the same!

Reviewing Justice League is a tough job at this point.

I don’t want to whine, reading the series has been a joy. Some weeks are a bit more joyful than others, but overall the series has been incredibly fun with a sprawling narrative that seldom gets in its own way, boasts wonderful art from some of the best the medium has to offer, and the presence of nearly every major (and minor) cool character (often with multiple versions of said character) making an appearance.

Simply put, it’s one of the best things DC has had going for over a year now and it is excellent to read.

It’s the reviewing that is getting difficult.

Why, you ask? Because the quality has stayed at such a high level that I find myself at the keyboard and wondering what I have left to say that I haven’t already said. And it was the blank screen staring back at me that made me marvel even further at what Scott Snyder and team have put together here.

JL #35 opens with Perpetua’s Sigil of Doom appearing across all worlds and all realities in the multiverse. We’ve been told of (and too rarely shown) her power since her first appearance, and while issue #34 gave us a glimpse of her power, we finally feel it in this issue as she addresses all lifeforms in the multiverse she originally created, telling them of their impending doom. We see the impact she has on the psyches and energies of reality through the ways our heroes are affected, whether through directly through their abilities or in their desperate need to find a way to win.

Ultimately, her power is fully realized as she utterly destroys a multiverse simply to demonstrate the fate in store for those that side with Justice. I won’t mention the particular multiverse, but I will say that Snyder’s ability to pull in fan favorites and include elements from the wide array and history of DC publication has been a particularly fun element of his storytelling on the title. It’s amazing that he can continue to deliver these story notes in a way that doesn’t come off as simple fan service or cheesy winks/nods.

Francis Manapul’s art is wonderful as always and he splits the color duties with Hi-Fi. Manapul delivers on all aspects of the art in this issue. His panel work depicting the various locations where Perpetua and her sigil appear are particularly strong as they seamlessly portray the expansive nature of the event and give a look at some key characters as they experience it. The destruction of the previously mentioned multiverse is illustrated just as wonderfully, depicting the unique characteristics of the setting and painting its end in pure violent cosmic power without becoming overly bombastic. His ability to convey character emotions in the smaller scenes is equally powerful. From Miss Martian to Shayne to Batman (Batmen), facial expressions and body language are used to tell the personal side of a reality spanning cosmic tale. It’s just great.

This is an issue that you can’t miss in a title run that you need to be reading. Highest recommendation. – Garret Grev

BATMAN: THE DEFINITIVE HISTORY OF THE DARK KNIGHT Book Review