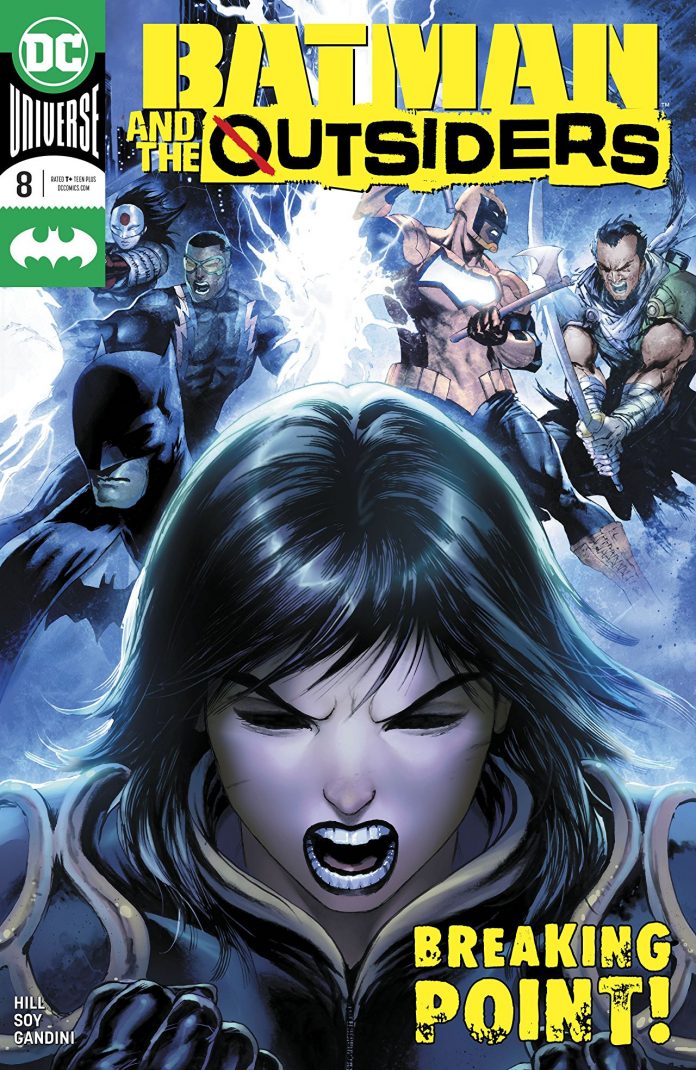 SYNOPSIS: Queen takes rook in this master’s game of chess played by the Demon’s Head himself, Ra’s al Ghul, as he cultivates more of the Outsiders for his taking. Cassandra Cain is caught in the middle between friendship, family, and her own moral judgments. Meanwhile, Black Lightning continues to make his moves while Batman seems to be away on “Bruce Wayne” business.

The issue opens with Batman, looking like he’s about to spring to action for the first time in the series. While dynamic, there was no action for The Dark Knight in this issue. I know to some, the lack of Batman is off-putting, but I really enjoy it. The Outsiders should be established without the big bad Bat. Of course, the book is going on a year, but I still see the value in holding back Batman. Hill has said that Batman will be a force when he shows up, but it’s not time yet. Don’t worry, The Batman is coming.

Who did show up was Bruce Wayne, fresh off of dealing with the death of Alfred (it really is strange saying it out loud) to have a conversation with Jefferson aka Black Lightning. Bruce is clearly grieving and Jeff recognizes it. For the first time, this interaction is not contentious, on Jeff’s side at least. Jeff goes out of his way to call Bruce is a friend and offer him words to try to comfort him. It is Bruce that is icy in this interaction, but the scene explains that reaction. It was nice to see a human moment between Bruce and Jeff, but I hope this is Jeff in the moment with the situation. He has been highly critical of Bruce and has been justified in that belief from the events of the book. It has looked like Batman and Black Lightning are on a collision course for a reckoning. I would hate for that to go away after this one encounter.

Best of the rest:

Babylon (Sofia) and Katana share another scene together, bonding in the Batcave. As noted before, Hill likes to pair the characters off to develop a relationship. It seems Katana may end up mentoring Sofia if she actually joins the team. It has been an interesting way to build team chemistry. It can feel slow, but when juggling so many characters, and introducing them wholesale to a good portion of the audience I believe it works well. When they all come together we will see if it all pays off.

Signal’s powers have shifted thanks to Ra’s and he’s choosing to hide them from Bruce. That has “bad idea” written all over it.

Shiva seemed really concerned when talking to Ra’s about his plans. Shiva is a stone-cold killer, so I hope this wasn’t a deviation of the character just to have that moment. If she was showing any concern, I hope it plays out that Ra’s is up to something awful that even she recognizes it.

Cassandra seems to be the least affected by Ra’s and is plans. That fits in with her character, as she is driven and hates the idea of her mother. If she stays that way through the entire story, that is fine, but if it does pull at her in future issues I hope it a slow burn. After this issue, it feels like any change in her feelings would take more time. More than just an issue or two to jump.

Another slowdown, character-building issue, but those are good things. – E. Chad Metz