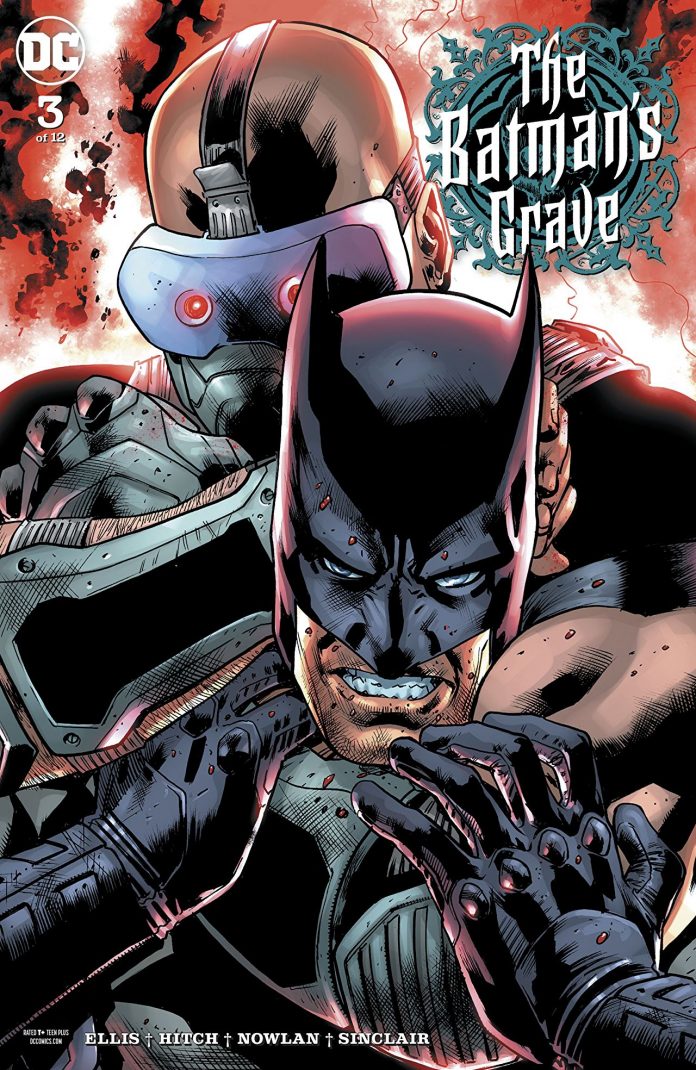 SYNOPSIS: A corrupt politico dies by his own hand, but James Gordon is convinced there’s something more to it. Now, it’s time to ask for access to The Batman’s resources. And that is why, right now, in a stately Gotham City mansion, The Batman is being beaten to death.

The title on the in-your-face cover clearly says The Batman’s Grave, but as I got into this month’s issue, I felt like I was reading Detective Comics instead! Bruce and Alfred are locked in sleuth mode, with Alfred’s droll wit in full effect. We’re now on the third issue and one of my favorite aspects of this series is the procedural element Ellis brings to the story. Batman is the “World’s Greatest Detective” and I appreciate this series focusing heavily on that trait. It can’t all be monsters from the Dark Multiverse!

This new case that Batman is working on leads him to what he dubs a “McMansion”. Hitch’s art is gorgeous here, with Batman’s cape having a Neal Adams-esque flutter as he walks through the foyer. Later, his staging is impeccable as Batman falls under a sneak attack from a mysterious, hulking figure. It creates a feeling of tension as we see this foe emerge from above and quite literally get the drop on the Dark Knight.

Like last issue’s brawl, this one also feels brutal, albeit not as long. I’m really enjoying their take on Batman in these fights. He’s human, not superhuman. Often Batman is seen as invincible, which can be fun, but there’s no tension if you think Batman can’t lose. This new threat is imposing and dwarfs the Caped Crusader, calling to mind Bane or a Killer Croc. What’s even better is the fight isn’t just there to serve as requisite action. Even struggling for his life, Batman’s brain is working, taking in the room and making observations that will help him unravel the mystery later on.

One of these observations Bruce has made is regarding a certain type of tech in the house, an electronic home voice assistant made by LexCorp that beat out the WayneTech prototype version. It’s hackability touches on a theme similar to The Dark Knight and if Batman would use something like it in his war on crime for surveillance purposes. Alfred, somewhat resembling actor David Niven at times, is so key to this series as he offers commentary on Bruce’s lifestyle and choices.

If you’re reading Tom King’s Batman, then you’re probably aware of how things are going for the dutiful Mr. Pennyworth. This title flies in stark contrast to that, showing how indispensable the character is to the mythos. These scenes with Bruce mulling out the aspects of the case out loud benefit greatly from Alfred’s input, be it a snide comment or useful bit of life experience from his time in intelligence. It’s hard to picture this title without him and he provides a timeless, classic feel to this adventure.

Once again, Ellis showcases Bruce getting inside the headspace of the victim. This allows Bruce to be far more empathetic to those he is seeking justice for. Let’s face it, Robert Turton isn’t an innocent man, but under The Batman’s watch, he still deserves justice. Seeing Bruce work out the crime might just be my favorite aspect of this series.

Having said that, the art is right up there for me, too. I love Hitch depicting Bruce hanging out in the cave, half in costume. It makes him seem more relaxed, normal, and at home. He’s aided by inker Kevin Nolan once again, who, combined with the colors of Alex Sinclair, breathe life into every panel. Bat-books aren’t at a loss when it comes to stunning visuals and this book fits right in.

With Batman and Detective tied up in multi-part crossovers and status-quo changing storylines, it’s refreshing to just pick up a straightforward mystery focusing on the Dark Knight Detective’s skills. If you’re not picking this title up, you’re missing out! – Javier E. Trujillo