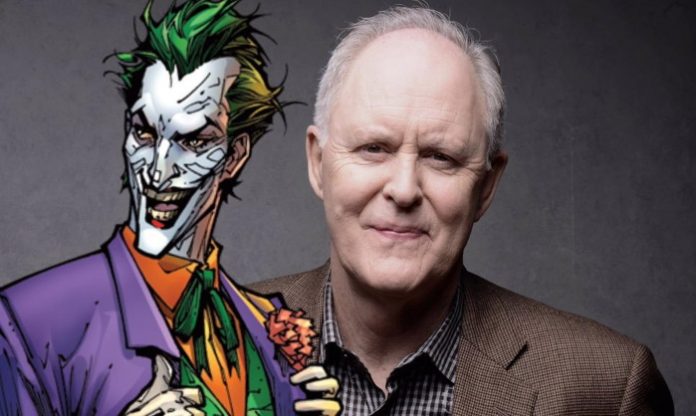 Based on my conversations over the years with the great Michael Uslan, Jack Nicholson was always the first choice to play The Joker in what ended up being BATMAN ’89.

But, it wasn’t a given that Mr. Jack was going to take on the role.  Thus, many others were considered for the part — including Robin Williams, David Bowie, Tim Curry, Willem Dafoe, and John Lithgow amongst others.

Speaking of Mr. Lithgow, the actor was recently on CONAN and told the story about how he actually overtly talked director Tim Burton out of even thinking about casting him as The Joker.

The main reason?  He didn’t think anyone cared about seeing a live-action Batman film!

As Mr. Lithgow said, if it had been between him and Mr. Jack, the latter was getting the part hands-down.  However, I think he could’ve done a heck of a job with the part as he’s a damn fine actor.  AND…

Isn’t it kind of funny, though, that back in the day, aesthetic was a very important part when it came to casting the role of The Joker?  Yes, Nicholson was/is a superstar and one of our best actors ever, but he certainly wasn’t a “leading man,” if you will.  Thus, there’s no way that a Heath Ledger, a Jared Leto, and maybe even a Joaquin Phoenix would be considered for the role back in the day.

We’ve come a long way since the 1980s in not only who could/should play The Joker, but how people perceive Batman on film. – Bill “Jett” Ramey

Review – ANT-MAN AND THE WASP

The Top 10 “Inspired By” Batman on Film Songs