SYNOPSIS: Batman must stop Deathstroke from killing the mayor of Gotham City! But to do so he has to figure out who ordered the hit in the first place. If his four main suspects aren’t ’fessing up to the crime, then is there someone even more sinister lurking in the shadows waiting to deliver the coup de grâce? Whoever it is, one victim will fall under their attack! 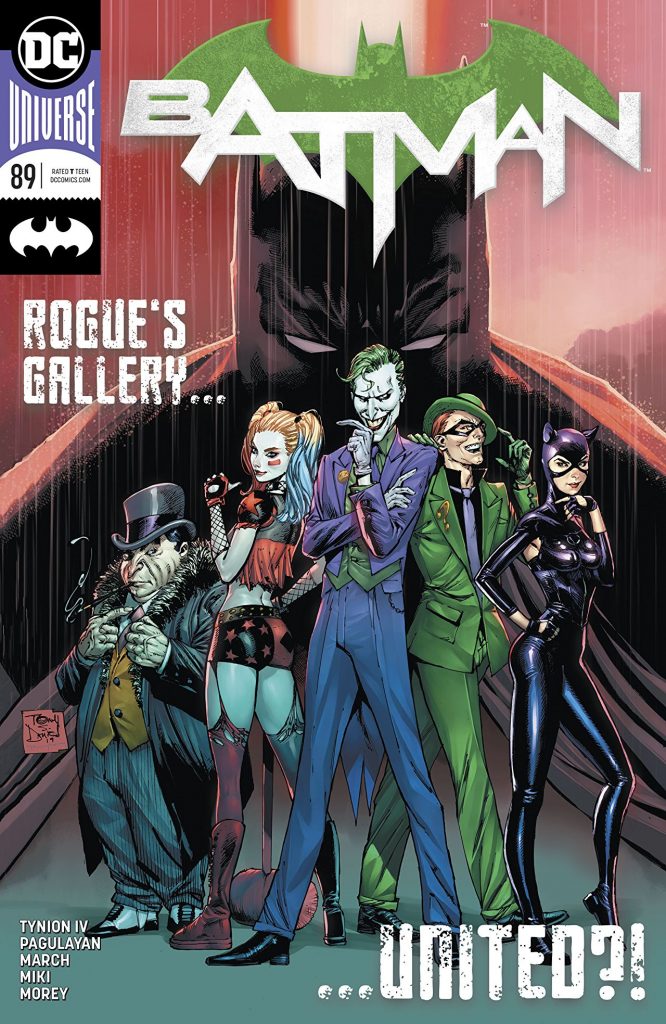 EDITOR’S NOTE: This review of BATMAN is dedicated to John Bierly…and will continue to be. – “Jett”

Were we not supposed to put the “slow as molasses” pace of BATMAN behind us when James Tynion IV took over as the writer of DC’s flagship Batman comic from Tom King?

Hang with me a bit on that, please.

Look, I’m not trying to bash or throw shade at King’s run; in fact, I enjoyed it a lot.

But let’s be honest, OK?  The storyline in the final few issues or 25 (I’m exaggerating) did move, well, as slow as molasses.

And after reading BATMAN #89, I’m hoping things aren’t moving as slow as molasses in the winter.  I say that because the story from the last issue — #88 — to this one didn’t progress all that much.

We do find out the following…

The Joker isn’t really dead, how/why Harley intervened to save Catwoman, the fate (maybe) of The Penguin, and that Batman is still taking on and taking down all the assassins that have descended on Gotham.

Oh yeah, we also get our first look at this “The Designer” character who is at the heart of it all…or is he?

More importantly, the “pact” that Selina Kyle made with The Designer back in the day — along with The Penguin, The Riddler, and, yes, The Joker — is fixin’ to come to light…maybe.

Catwoman’s trying to come clean and tell The Batman all, but they keep getting interrupted.  Will it be a deal-breaker for the Bat and Cat?  (With as much as they went through during King’s run — and his upcoming BATMAN/CATWOMAN series, I kinda doubt it.)

And what does The Joker have up his sleeve?

I reckon we’ll finally find out what the deal is in BATMAN #90…unless we don’t.

Regardless, the molasses is fixin’ to heat up…probably? – Bill “Jett” Ramey