SYNOPSIS: Slade Wilson has come to Gotham City, and his arrival is making the Dark Knight very suspicious. Robin, on the other hand, thinks the swashbuckling mercenary is just here to help. Is Deathstroke a friend or foe…and what are his plans for Batman? 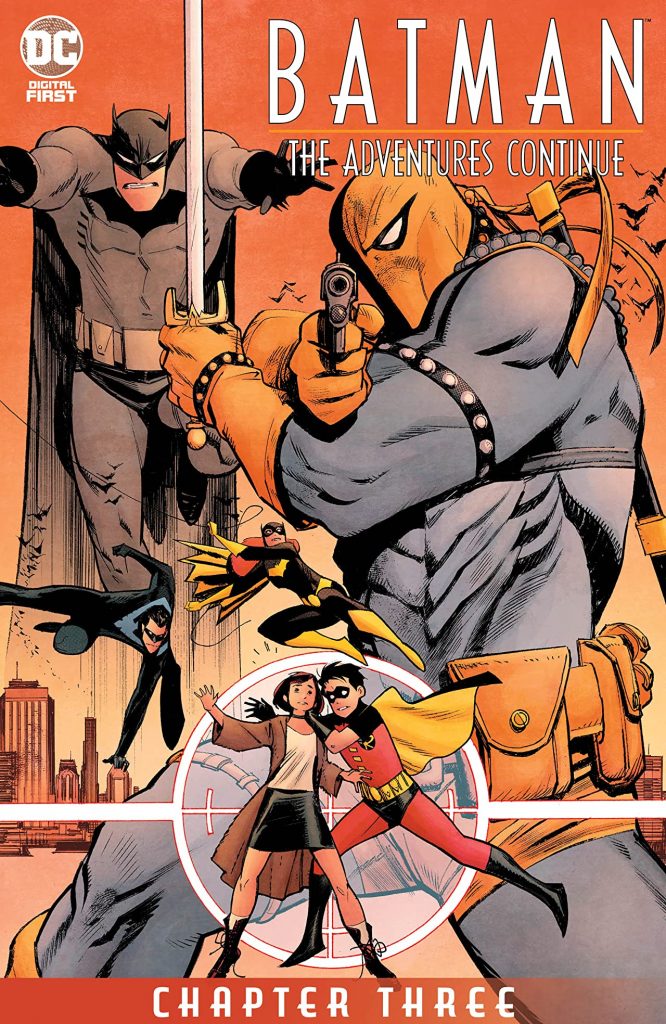 Batman’s adventures continue in chapter 3 of this digital series, which will be the second issue of the print series (thanks BOF reader Ron Black for pointing it out in the comments), “Mentors, part 1”. I am thoroughly enjoying the return of the “episode’s” title card these issues are providing, an aspect of the animated series that I missed when it jumped to the style of The New Batman Adventures.

Once again, the mysterious stranger who has been lurking in the shadows (whom we all know is Jason Todd) continues to stalk the Bat-Family, this time as they encounter Clayface. There are plenty of easter eggs in this confrontation, from Superman’s mental health crisis alter-ego, Gangbuster, Farmer Brown from the episode, “Critters”, and Annie from “Growing Pains”.

While the previous two chapters felt like a crossover between shows, this entry was firmly rooted in the Bat Universe and was stronger for it. With no reference to a past with Nightwing, this Slade Wilson, aka Deathstroke, tries to present himself as a dangerous, yet benevolent, ally when he comes to Robin’s rescue.

While we’re still on the subject, what are the odds that Burnett and Dini intentionally chose Clayface to be the villain Deathstroke confronts given that both characters have been voiced by fan-favorite Ron Perlman in separate series? Pretty good, I’d say!

Obviously, Bruce is naturally suspicious as Deathstroke tries to butter up his partners. The writing duo provides some wonderful character moments between Batman and Gordon, and later Bruce, Alfred, Babs, and Tim as they discuss this new arrival in Gotham. It’s these scenes that for me make it feel more like an episode and add a complexity I was missing from the prior story.

Don’t get me wrong, this isn’t a deep, psychological profile. You can still hand this issue to a kid and they’ll be able to follow along with ease (provided you have no issue with resident-Bad-Boy Jason Todd uttering one mild swear). Seeing Deathstroke approach Batgirl solo as one of many chess moves he makes in this installment heightens the intrigue as we wait for his actual scheme to be revealed.

I enjoyed how Deathstroke became aware of Jason’s presence and worked it into his ploy to get Batgirl to trust him. It shows what a master of strategy and cunning he is, highlighting that he’ll be a challenging force for Batman to reckon with.

Templeton’s art comes off as simple, based on the designs he’s capturing, but he has fun with the art, breaking panels when he needs to. This helps to keep things visually interesting, especially as the digital page it’s designed for isn’t the typical comic book format.

I was pleasantly surprised by this issue, falling more in line with my expectations from this particular creative team. I find myself eagerly awaiting further revelations about Deathstroke’s partner and how he will go about trying to win Tim’s trust. Without a current Batman title this month, this little chapter helped to fill that void and makes me want to go back and revisit some of the animated episodes referenced. That’s surely a good thing! – Javier E. Trujillo