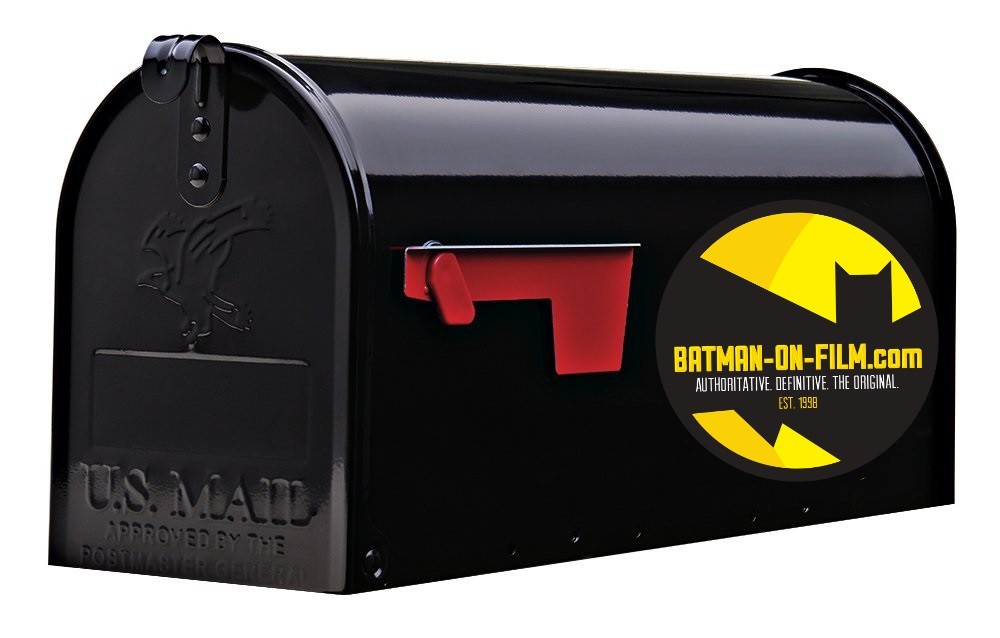 Hello BOF’ers!  I hope everyone is doing well still under these crazy circumstances!  If you missed the previous BOF Mailbag, CLICK HERE.  Now, let’s get right to yall’s questions. – Bill “Jett” Ramey

Did you read BATMAN: THE LAST KNIGHT ON EARTH? And if so, what were your thoughts?

JETT SAYS: Javi, I read the first two issues…maybe three…and then bailed out on it.  As much as I love Scott Snyder and Greg Capullo doing Batman, this just wasn’t my thing.  Same for DARK NIGHTS: METAL.

What would you say are the five best theatrically released Batman movies, based on fan/audience consensus?

You have advocated for DC films to be director-driven, but how do you think WB should protect its films from avoiding situations like Batman Returns or B v S where the directors went nuts with their “artistic” tastes and compromised the characters? #BatmanOnFilmBag

JETT SAYS: While I don’t like either BATMAN RETURNS or BATMAN v SUPERMAN, I totally defend Tim Burton and Zack Snyder’s right to make them.  The filmmaker-driven approach is still better than the cookie-cutter producer/studio-driven alternative.

Do you think that the COVID-19 pandemic could affect THE BATMAN’s performance in terms of the audience demand of more optimistic, light-hearted stuff instead of Reeves’ dark, “grounded” movie?

JETT SAYS: Nope, not in the least.  If the film is good, people will turn out to see it.  Period.

Sorry to ask but I thought I would. Have you heard the same thing about what XXXXXX XXXXXXXXX posted yesterday about a certain cut of a movie? Don’t worry I won’t say the name. Namely with HBO MAX gearing up next month.

JETT SAYS: Ayer saw SUICIDE SQUAD all the way through, so I believe comparing a director’s cut of it to Snyder’s cut of JUSTICE LEAGUE is like comparing apples to oranges.  With that said, I’d be interested in seeing an “extended cut” of SS as that seems to be the main issue — a lot of stuff (namely scenes with The Joker) was left on the cutting room floor.  With that said, I don’t know if they’ll do that right now with director James Gunn’s reboot — THE SUICIDE SQUAD — coming out next year.

So does BATWOMAN’s casting change your opinion on an eventual Batman on The CW shows?

JETT SAYS: Nope.  I don’t see that happening — at least not in terms of a full-on Batman showing up on The CW DC shows or a solo Batman TV series on the network.

How many movies into [Matt] Reeves’ [THE BATMAN] trilogy do you think it will be before we’re introduced to his Joker?

JETT SAYS: If I had to make a guess on it, I’d say The Joker shows up in the finale of the trilogy.

When Batman rode off at the end of THE DARK KNIGHT, was [Christopher] Nolan’s plan always to have had Bruce retire? Or was that aspect a product that came when writing THE DARK KNIGHT RISES, possibly a result of Ledger’s passing? I hope you and your family are doing well during these times!

JETT SAYS: David Goyer said that when he, Chris, and Jonathan Nolan began putting the story together for THE DARK KNIGHT, The Joker would scar Harvey Dent in that film and go on trial in the third.  However, as they wrote the story, that all changed as they followed Chris’ advice to not hold anything back for a potential sequel — and that’s what they did.

I’m not convinced that The Joker would’ve returned for the third film — which became THE DARK KNIGHT RISES — even if Heath Ledger had lived.  Why?  Because I don’t see Chris repeating himself with another Batman vs. The Joker story after TDK.  For the most part, each part of THE DARK KNIGHT TRILOGY came about organically — including Batman retiring because “He was no longer needed,” as Bruce told Gordon in RISES.

What would it take in your opinion for Pattinson to become the definitive Batman?

JETT SAYS: I don’t think there is a definitive Batman, to be honest.  I do think there needs to be certain “Batman things,” if you will, included in a cinematic Batman story to at least come close to it.

As far as Robert Pattinson’s Batman, I just want a great performance in a great film.

Hi Jett, I have a question. When will we get an official trailer from THE BATMAN? Are we going to expect the trailer to come out very soon?

When do you reckon THE BATMAN will begin filming again?  Thanks!

JETT SAYS: I reached out to some of my UK friends who have entertainment industry connections and they all think perhaps August/September.  Fingers crossed!

Do you have any interest in the “Snyder Cut” of JUSTICE LEAGUE and will BOF review it?

JETT SAYS: Personally, I have no desire to see it because I really, Really, REALLY don’t like BATMAN v SUPERMAN (though I borderline love MAN OF STEEL…go figure) and don’t care to see more of the same.  However, BOF will cover and review it if and when it’s released and will foot the bill for whoever is volun-told to watch and review it.

I do have HBO Max on my TV package though.

JETT SAYS: Probably.  I believe we’re going to do a BATMAN FOREVER one shortly to mark the film’s 25th anniversary.

What doors could the completion and release of the Snyder cut open? More specifically, do you think it is now likely that we get a director’s cut of Ayer’s Suicide Squad as an HBO max exclusive? Maybe even the resurrection of some projects that were originally going to be part of the Snyderverse?

JETT SAYS: Zack Snyder’s JUSTICE LEAGUE is a one-off for HBO Max — Warner Bros. Pictures really has nothing to do with it.  When it comes to DC on film at the aforementioned Warner Bros. Pictures, they are going to continue doing what they are doing: Standalone solo DC films helmed by strong filmmakers and no more overt shared universe.

When it comes to the “Snyderverse,” let’s be honest, shall we?  Mr. Snyder’s vision for DC on film was a failure and it’s not like the general audience is loudly demanding to see more of it on the big screen.  Plus, THE BATMAN is coming and that’s WBP’s #1 DC on film priority.

If a Gotham City Sirens movie is the next Harley Quinn project, do you think they will use Zoe Kravitz’s Catwoman or will they cast someone else in the role?

JETT SAYS: After the failure of BIRDS OF PREY, I don’t know if we’ll get another solo Harley Quinn film anytime soon.  Personally, I’d like to see more HQ on film, but that’s just me.

As far as Zoe Kravitz’s Catwoman potentially being in a Gotham City Sirens film, I don’t see that happening.  THE BATMAN is its own thing and really has nothing to do with other DC movies.

There have been some strange times during Batman’s time on the silver screen. Will the original release of JUSTICE LEAGUE to the release of THE BATMAN go down as the strangest?

JETT SAYS: Yeah, it’s a pretty damn weird run.  There’s certainly a book to be written about it for sure…maybe by me.

When will we see some photos of The Riddler and Falcone as well as Catwoman?

JETT SAYS: If they didn’t have to shut down production back in March, we might’ve already seen some publicity pics of them.  Now, I figure it’ll be late this year or in early 2021.

According to Grace Randolph, the Batgirl movie is still happening and Commissioner Gordon in that movie will be played by JK Simmons. Any truth to this and your thoughts? I think they should cancel this Batgirl movie.

JETT SAYS: 1) I’m not holding my breath for a Batgirl movie. 2) JK Simmons just signed a big deal to play J. Jonah Jameson in several upcoming Spider-Man movies, so I don’t see him concurrently playing Gordon.  3) Who the hell is Grace Randolph and why should I care about anything she says?