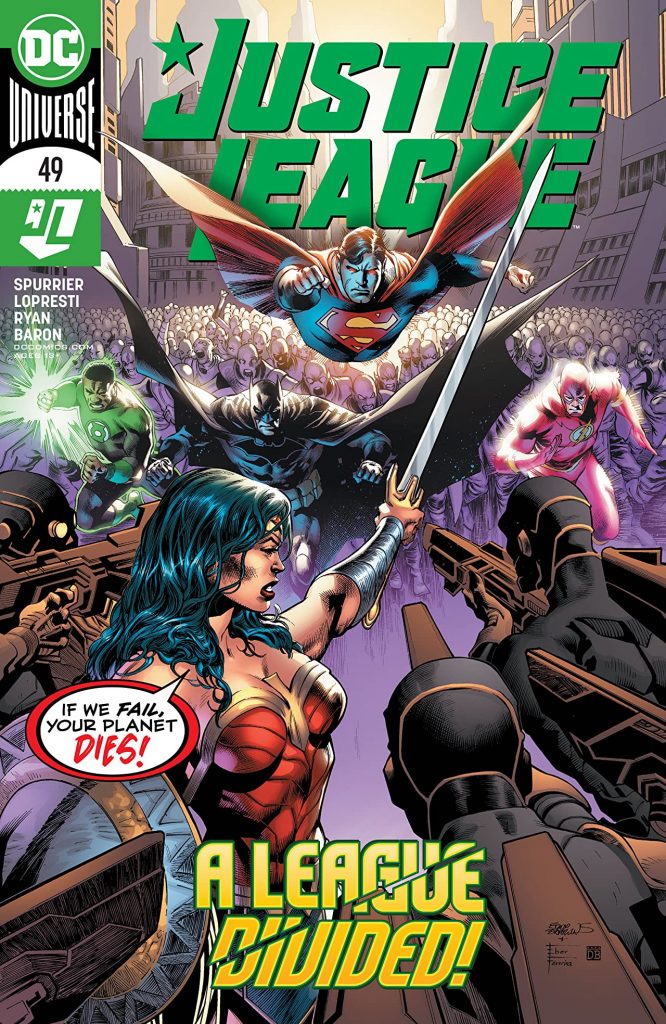 While I am still enjoying the current arc on Justice League, I find myself not knowing exactly how to review its newest installment. Justice League #49 continues the three-part storyline “The Rule of War,” with the league finding itself watching over the alien planet of Trotha after unseating its oppressive empires, being asked to lead its people, and protecting it from a suicide bomber from an enemy force, all while struggling to agree on the best path forward.

There is a lot going on here. Maybe too much.

As the relations between Trotha’s two divided cultures turn increasing sour, Wonder Woman is seemingly the only character firmly against the Justice League serving as the planets overseers. She offers a lengthy retelling of an Amazonian myth as a parallel in her attempt to explain her opposition, and the League’s missteps, to Batman. Batman works to pull information out of the imprisoned empress in order to determine the best path forward. Flash works at super-speed to micromanage the growing conflict between the alien factions. Green Lantern heads off on a mission to negotiate peace with an invading foreign army. There is a division in action between the heroes that works to keep the team from working as a cohesive unit, leaving them prone to failures along the way, while the division in the people of Trotha threatens to spark its own ware without the need of an invasion.

Spurrier seems to have a very specific Justice League (or Star Trek as I offered in my review of the previous issue) story, but somewhere in the sea of ideas, readers will likely feel like they are treading water, just working to stay afloat instead of swimming to the shore. The concluding panel offers an interesting twist, but the issue itself gets a bit lost and spends too much time in Wonder Woman’s story-within-a-story-telling. The allegory to our current political climate (and dangers of judging different cultural practices) is still on full display, but where Spurrier is going with it is a bit muddier than I was expecting coming out of Part One and I’m curious to how he’ll work to a satisfying resolution with Part Three.

There are some great bits of action. Every character gets highlighted and then gets to unleash their full powers again conveniently automated attack ships, which is honestly pretty fun. The unique nature of Trotha’s opposing population (all beings start as energy and choose a path of high tech or organic nature) is intriguing and creative. However, the thing that really powers this issue with Aaron Lopresti’s artwork I’ve seen other critics label Lopresti’s pencils as generic or too commercial, and while I’ve previously noted their accessibility I believe that the work is visually stunning and more iconographic than commercial. These characters really look like fun, pop-y, and identifiable versions of themselves, and Lopresti’s work fits well within the DC house style without being at all boring.

Overall, Justice League #49 is a good entry in the title’s current storyline. It suffers a bit from being a middle chapter in a story that has great big ideas and a bit much exposition, but the concepts are strong and the artwork is very good. If you like unique JL stories then you should miss this one, even if it isn’t as strong as the story’s introductory issue. – Garret Grev 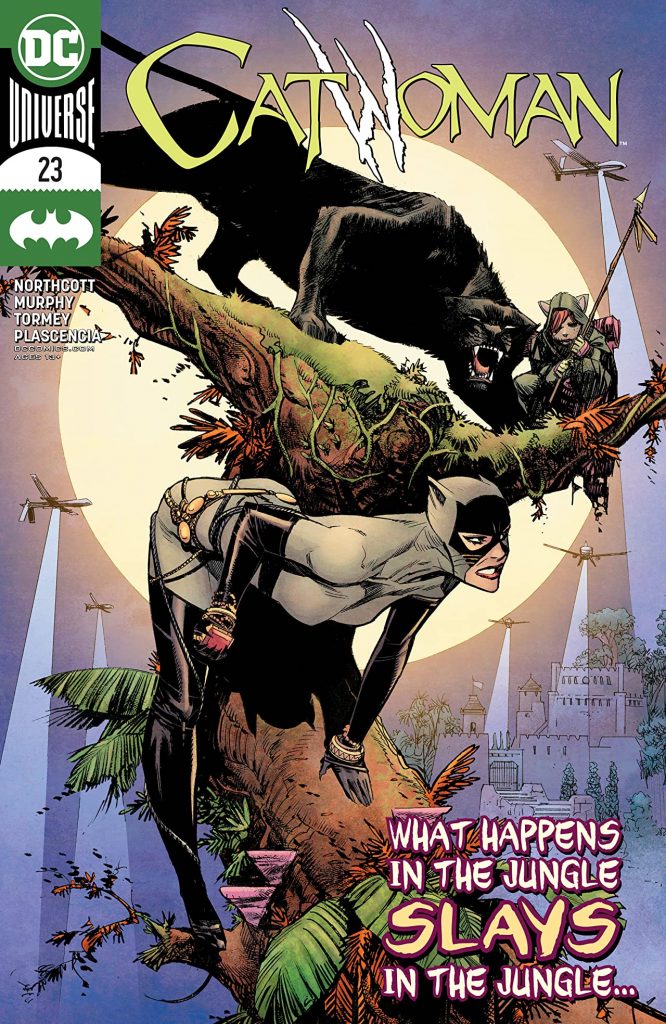 Rumble in the Jungle!

Selina is jet-setting to Isla Nevada, a jungle-filled island that is home to Snowflame, a coked-out blowhard who invites Selina to a gala exclusive to notorious villains.  On display at the gala is the world’s largest diamond.  Could that be the reason Catwoman has made her presence known on Isla Nevada’s verdant plains?  Because rumor has it that there is another valuable item – though not of the gem variety – a list containing vast sums of information on all of the villains at the gala.  Sounds like the perfect tool for blackmailing, and it will go up for auction tomorrow evening, along with the diamond and several other unique artifacts.

But there’s more to the story of Isla Nevada – Snowflame’s cartel is losing people to the jungle.  There are myths about the island – tribal myths about Kisin, “the god of Death” – could that be the black panther the size of a city bus that the cartel has seen deep in the jungle?  Selina is about to find out…

This right here is one of the stories that proves Catwoman can hold a story on her own and deserves her own book (not that any of this was in question, but you get what I mean).  The dialogue is sharp, the characters are spot-on, and the story pulls you in and keeps you entertained the entire way through.

The story this month has been put together by Blake Northcott and Sean Murphy (yes, THAT Sean Murphy [who also drew the main cover]), with Northcott doing the scripting.  This is a sharp, engaging story, and I’m looking forward to see how it wraps up next month.

Cian Tormey is on art duty this month.  His variety of layouts is effective, and some of his shots are distinctly cinematic which helps to amp up the action sequences.  FCO Plascencia fills the scenes with splendid color.  The pages when Selina arrives on the island at sunset and Snowflame picks her up in his sports car are sumptuous.

In one of the early pages, Selina says, “I’m getting back to work.  Finally.”  This is music to my ears.  After some of the uneven threads in Joëlle Jones’ Catwoman tapestry, it’s good to see Selina back in her element – exotic locales, nighttime hijinks, and elaborate heists.  This is the Catwoman we know and love.  Welcome back. – John Funderburg

SYNOPSIS: After nearly killing Penguin, Azrael races to find the person who stole from the Church of St. Dumas. Batman, however, won’t allow Azrael to use such aggressive methods. Who will be left standing when the Dark Knight faces the burning vengeance of St. Dumas?! 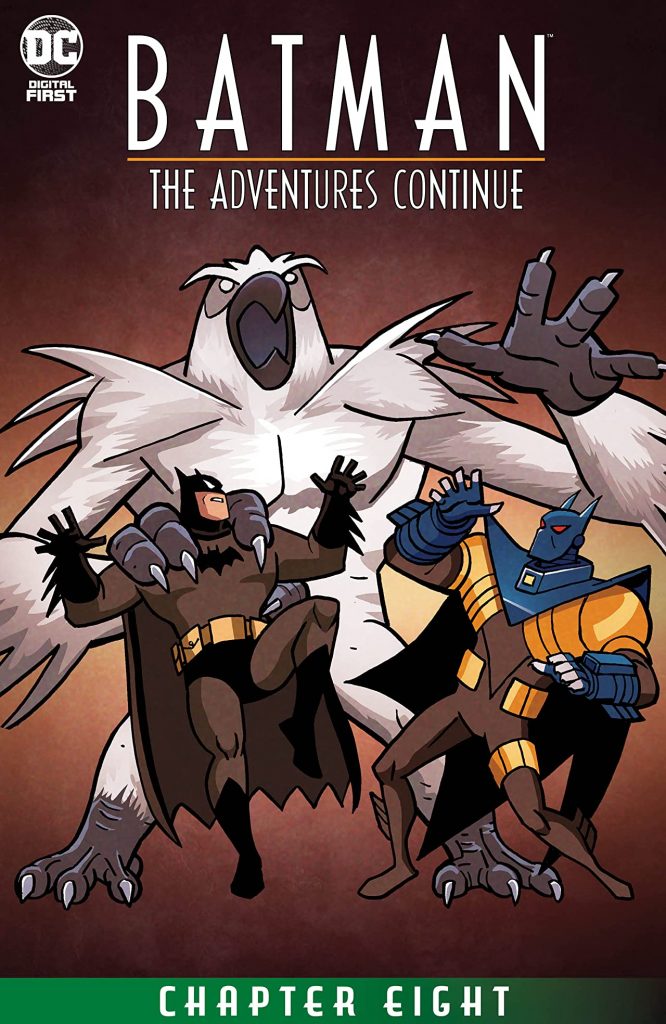 Right off the bat (uh, pun not intended, honestly), I was taken by surprise that Penguin’s guard, Mr. Wing, could actually talk. I had just assumed he was some lab mutation, not a low-level goon obsessed with a bonus for taking down the Bat.

I was also happy to see yet another James Bond reference made in this series, with Batman bringing up Vesper martinis! Not only is it a fun nod, but gives us an insight into Bruce and Jean Paul’s past relationship.

Batman and Azrael divide and conquer when it comes to their foes, with the Dark Knight handling the monstrous Mr. Wing with relative ease. When he comes to Azrael’s side, we get a stark moment of violence for this series, with Azrael holding a very bloody and battered Penguin over the building’s edge before dropping him. The expression Templeton adorns Batman with says it all-this Batman doesn’t kid around.

With Batman occupied with saving Penguin, Azrael is off to his next target and he’d better prepare for a chilly reception! (okay, this pun was intended)

It’s in the second half of this story that we get a bit of a wrinkle in the continuity, learning what happened to Nora Fries in between The New Batman Adventures and Batman Beyond. The tragedy just keeps coming for poor Victor.

Said tragedy takes an awkwardly dark turn as Batman has to use Nora as a means to distract and take down his frozen foe to save Azrael. I felt a little disappointed that we didn’t get to see a fire sword versus freeze gun battle. Azrael’s design carries over the oversized gauntlets from the comics, yet the gadgets they were imbued with don’t make an appearance. It’s a missed opportunity for this outing.

As with all these digital issues, they are a quick read, but I appreciate that we take a moment to have a discussion between Bruce and Jean-Paul about their respective beliefs. It also highlights the compassion Batman has compared to Azrael, something key to their dichotomy. Plus, Kubina’s colors get to really shine in the church setting!

The tease for the next issue hints at the mysterious stalker coming for The Joker! It’s worth noting that Templeton goes for an aesthetic more aligned with his appearances in the Justice League cartoon and the flashback in Batman Beyond: Return of The Joker than his TNBA look, which I am all for.

I definitely enjoyed this issue, but feel a little cheated somehow that Azrael’s time in the book seems to be at a close already. Realistically, this was never going to be “Knightfall: The Animated Series”, so it’s really no surprise that Jean-Paul’s involvement was only for an “episode”. Still, it was fun to see the character get the B:TAS take. Looking back at the “Bane” episode, what mattered was having the essence of the character there, and I feel Burnett and Dini succeeded in that.

We’ve got four chapters left and Red Hood, The Batman Who Laughs, and Vampire Batman are still waiting in the wings! I’m greatly looking forward to where we go next! – Javier E. Trujillo

BTAS Retrospective – “Nothing To Fear”

GOTHAM: 2 More Pics of The Joker