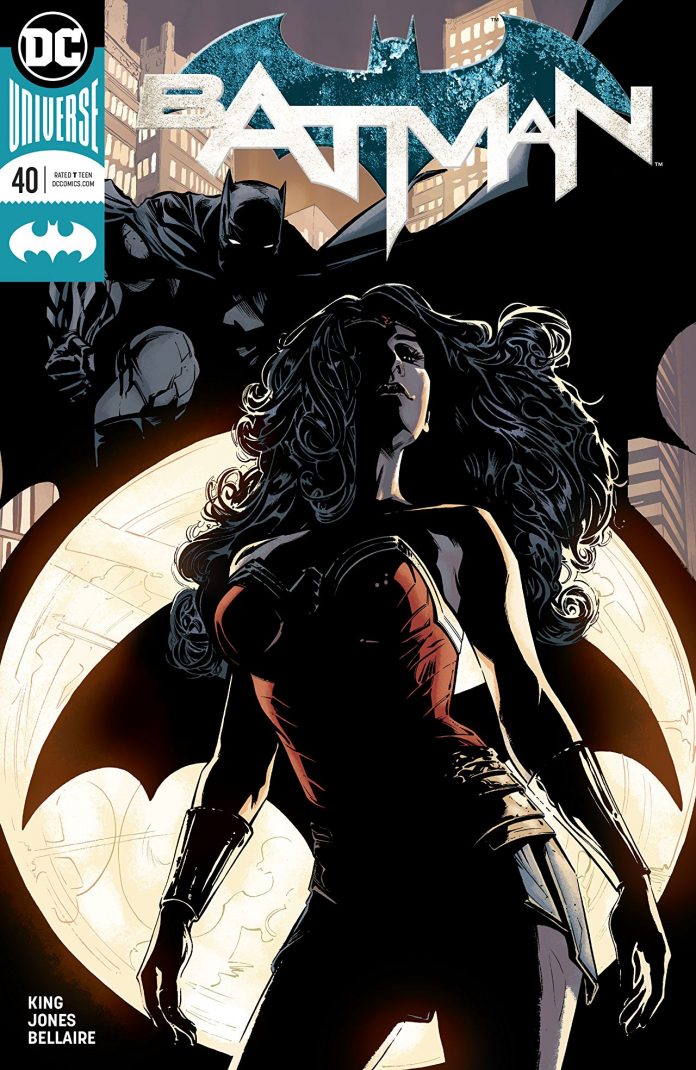 SYNOPSIS: “SUPERFRIENDS” part four! Since the beginning, the friendship between Batman and Wonder Woman has stood at the heart of the DC Universe. Now that friendship is coming apart, and as it does, the universe itself begins to crumble. The conclusion of Batman’s team-up with Wonder Woman.

In BATMAN #39, writer Tom King marooned Bruce Wayne and Diana of Themyscira in a dangerous dimension of monsters…and romance?

So here’s the deal: On a long-ago Justice League mission, Bruce and Diana encountered The Gentle Man — a heavily armed and armored martyr from another dimension who battles back infinite legions of rampaging beasts borne of (and fueled by) the sin of man, all in an impossible effort to keep these beasts from spilling into ours. In other words, “The Horde Is Everlasting.”

Bruce and Diana offered to give him a breather, and today he’s taken them up on it. While Selina Kyle takes the warrior to see his wife in Gotham City, Bruce and Diana wage war against the swarms…but there’s something they didn’t know. As they’ve been realizing for a decade and Selina is only finding out now, time passes differently in this ravenous realm. How much differently? I’ll let you find out for yourself when you read the issue…but let’s just say that it’s long enough for two ludicrously attractive warriors high on adrenaline and confined at night to the same caves and campfires to notice each other. They’ve both got great loves back home, but after all this time, are those loves even alive? Is The Gentle Man ever coming back to relieve them? Who knows? Their lovers wouldn’t. But they would.

Meanwhile, how does Selina react when she realizes what The Gentle Man has committed (or is it condemned?) her fiancé and his Amazon associate to? You probably know. The Gentle Man sure as hell finds out.

And yet Selina observes some lessons about love from the ordeal, and King writes a short but sweet scene between Diana and Selina upon her and Bruce’s return. But Batman and his betrothed get the final lines, and they’re pretty wonderful. So yes, for now, the wedding is still on…at least until someone intercepts an invitation.

Artist Joëlle Jones and colorist Jordie Bellaire continue to make miracles on these pages. In Gotham City, they capably capture the sweetness and romance of The Gentle Man’s reunion with his earthbound wife…and Selina’s impatience and anger with the whole thing. (There are two panels of posture and facial expression in the backseat of a car that are absolutely incredible, saying everything Selina is thinking and feeling without a single word.) And in the other realm, the pencils and inks and palettes equally paint the weariness and resolve of Bruce and Diana as they battle on. The use of silhouettes in the scene that resolves last issue’s cliffhanger is so sexual it’s almost overwhelming.

Tom King continues to be all-in on Bat/Cat, to the point that I don’t see how this wedding won’t happen…just as much as I can’t imagine how or why it really will.

All I know is that, for now, he’s giving us some of the most interesting, original, and entertaining Batman stories this title has seen in the many centuries it’s been with us.