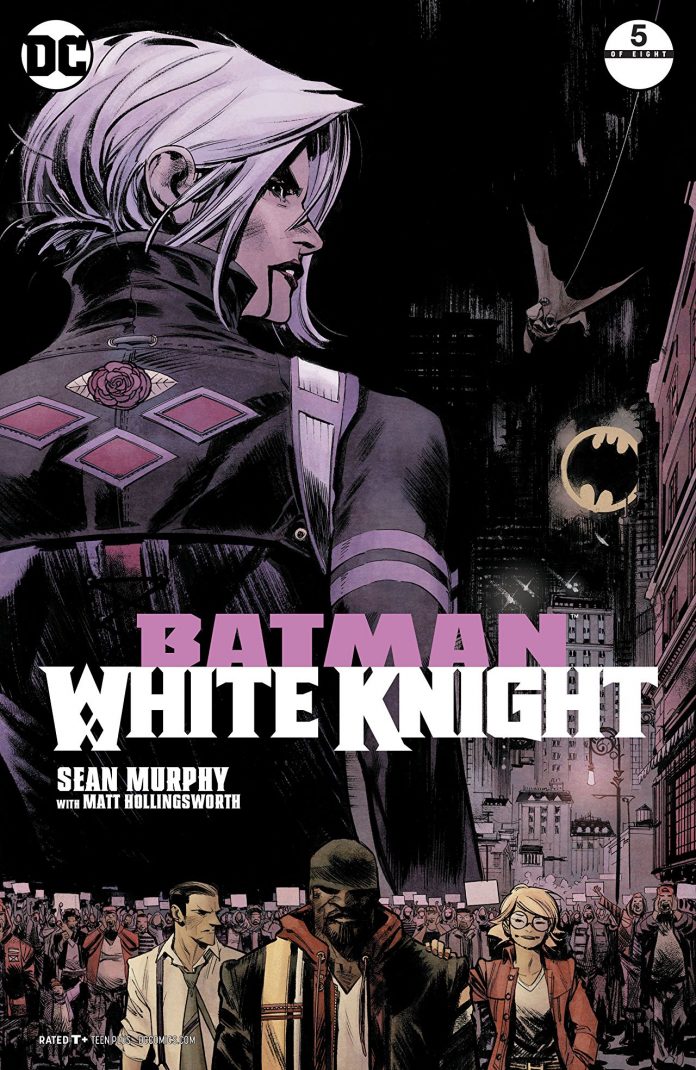 SYNOPSIS: Jack’s mind and body begin to betray him as he prepares for an inevitable showdown with Batman, and Bruce himself struggles to keep his team united. As the game gets tougher, Batman seeks counsel from a shocking source—and after Wayne Manor is infiltrated, a car chase for the ages aims to curb Napier’s supercriminal crew once and for all.

All of the pieces are coming together in Sean Murphy’s Batman: White Knight #5.

The creator has been laying the groundwork for months, and every piece of his puzzle is starting to snap together. The Jok…Jack Napier continues to bring Gotham, the GCPD, Nightwing and Batgirl against the Dark Knight. The GTO is in full swing, and won’t allow anyone to interfere.

You shouldn’t be surprised to read that Batman: White Knight #5 is excellent. Every issue has been phenomenal, cranking the overall story to an 11. This series could have been called Batman: Escalation, and it would have worked just as well. Murphy capitalizes on every relationship, raising the stakes to every conversation, action and idea. I even had a quick flashback to that opening scene in issue #1, wondering how we’re going to get there. Then I turned the page and had an “ah ha!” moment.

Two scenes in issue #5 stood out to me. The first was a serious conversation between Batman and Harley Quinn. It’s a touching moment, where the Dark Knight confesses that he’s taken it easy on her over the years because she’s the only one that’s been able to keep Mistah J under control. Affectionately, she responds, selling us how the arch rivals are so closely connected. Well, the joke’s on us. It was all part of the plan.

Another scene I loved involved the other Harley, Neo Joker. Teaming up with the Mad Hatter, they sneak into Wayne Manor. I particularly liked their opening dialogue, where she calls him on his crazy crush on Alice (something many of us Batfans have thought for years). They proceed on the grounds in an unexpected way, and nearly find out the secret identity of the Batman. I won’t spoil the end, but Bruce recovers in hilarious fashion.

The art in this book is consistent with everything else thus far, which makes sense since Murphy has done EVERYTHING. It’s amazing that he’s been able to keep this book on schedule, considering he’s doing EVERYTHING. Every panel is moody, dark, sketchy and haunting. It’s a perfect world for a perfect story. Having become a huge fan of Neo Joker, this cover may also be my favorite in the series thus far.

Sean Murphy has been praised for his art for years, and rightfully so. What’s more surprising is that his storytelling is just as good. Batman: White Knight #5 connects the dots in dramatic and surprising ways, answering a few questions but planting seeds for the remaining 3 issues. If you’ve been keeping up with the book, obviously buy this issue immediately. If not, what are you waiting for?! This is the best Batman story in years, and will go down as one of the greatest…of all time. I don’t care what the Joker has up his sleeve, even he can’t ruin Batman: White Knight. – Ryan Lower