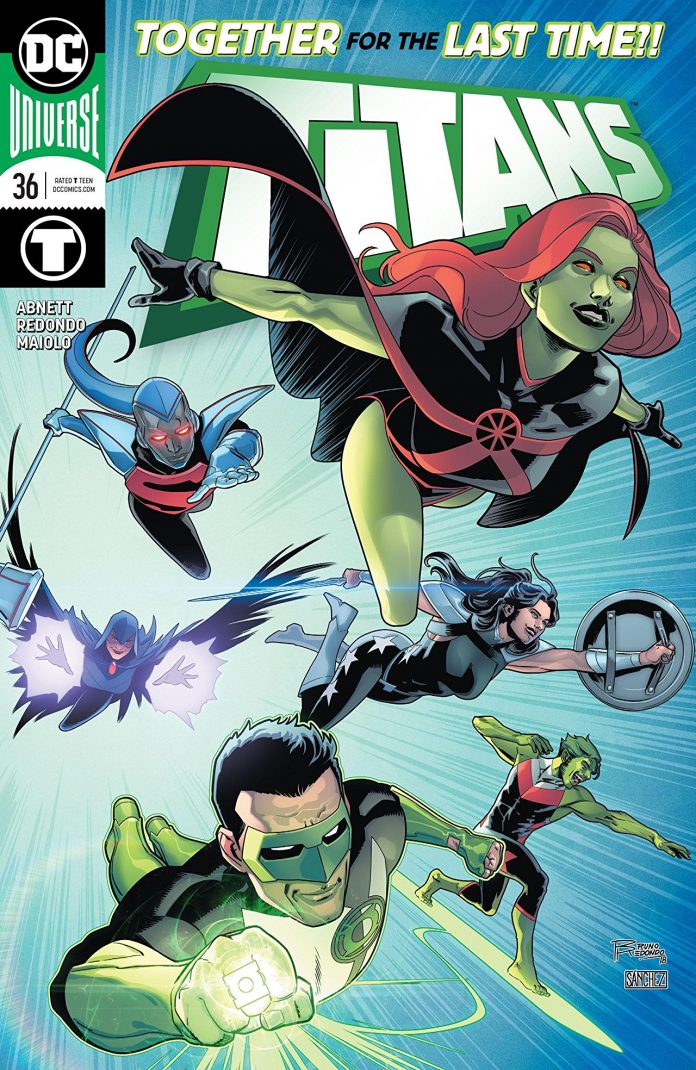 SYNOPSIS: “Into the Bleed” finale! It’s all been building to this! Witness the battle for the fate of the entire Multiverse as our heroes tackle Mother Blood and her armies of Unearth! Mother’s plan to use the Bleed to spread her power throughout every corner of the fabric of reality has reached its zenith, and she’s pulling out all the stops to see to it the Titans fail in stopping her. But even with Raven’s soul-self reunited, can the team rescue their heavy hitters Kyle Rayner and Steel before it’s too late? Don’t miss this melee of multiversal mayhem!

Not only does the “Into the Bleed” arc come to an end, but so does this incarnation of the Titans.

Mother Blood has used the Titans to open “the Bleed” which will give her access to the unlimited power of the source event that the team has been tasked with stopping. Their only hope lies in Raven, who has finally become her whole-self.

Raven was front and center this issue, and that brought a fresh view to the book. She has been there from the start, but Raven has been undervalued her as a point of view character until now. Maybe it was because she was split for most of this run, but she never came off as interesting, outside of the mystery of her missing soul self, so her perspective was never missed. Through her narration of the main story, as well as the flashbacks of Nightwing convincing her to join this incarnation of the Titans, the book finally found a mission statement: together, fearless as the kids they were, but as strong as the Justice League. That idea was something to build on, but it was not meant to be. Speaking of the flashbacks, not sure if this issue was meant to be the series finale when it was written, but it was fitting that Nightwing played a prominent role in the final issue.

The rest of the issue was Mother Blood, the Bleed and Unearth. Just an uneventful wrap up to all of those concepts. Each had loads of potential, but they could never realize it. Fortunately, all three still exist, in one form or another, at the end of the issue. Maybe that will return in other pages and live up to what they could be.

And thank whatever god you believe in, regular Beast Boy returned by issue’s end. Serious, why did it take so long to ditch this concept? It was so frustrating trying to describe the beast guy that rages out and gets bigger and NOT draw comparisons to other people’s characters. Besides, it just never fit Garfield’s character. He’s a fun loving, carefree guy, not a brooding, unhappy rage monster (I mean this is not the Snyderverse).

Titans could have turned the corner, especially since they seem to have an idea of how to build forward, that opportunity has presented itself several times before with the same results.  It’s unfortunate because there was more to learn this Steel, see an adventure of just Kyle and Donna, and have these Titans meet the new Rich Grayson.

Hopefully, some, if not all, of these characters find homes in other books. They may not have come together in the best way in these pages, they are all awesome and will shine when given the right time. – E. Chad Metz

The Mount Rushmore of Batman Comics